October 25, 2018 - Often misunderstood, bats are crucial to our planet. They provide essential pest control, pollinate our plants and disperse seeds for new plants and trees.

Bats first appeared on Earth 50 million years ago, and today, there are more than 1,300 species worldwide and 47 in the United States. Bats remain a frontier of wonder and discovery -- from understanding their longevity to inspiring medical marvels.

It’s hard to talk about bats without mentioning white nose syndrome -- the fungal disease that’s decimating many bat species as it spreads from the New York area where it was first discovered in 2006. Across the continent, scientists from U.S. Fish and Wildlife Service, the U.S. Geological Survey, the Bureau of Land Management and partners are working to protect bats, research treatments to halt the spread of white-nose syndrome and raise awareness about just how incredible (and vulnerable) these creatures are.

Check out some of our favorite bat species found in the U.S. and what makes them so cool. 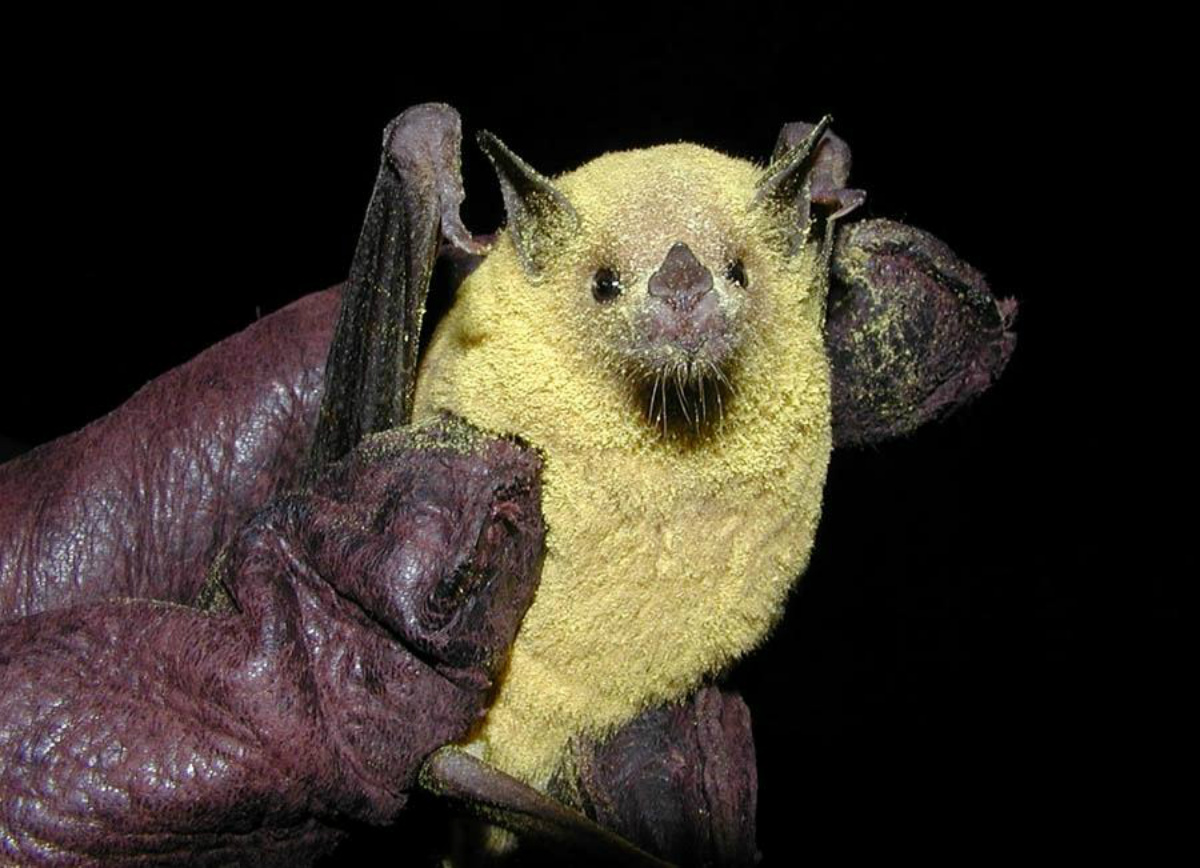 No, the lesser long-nosed bat isn’t normally yellow. This one is covered in pollen after a busy night of drinking nectar. Photo by National Park Service.

Small but mighty, the lesser long-nosed bat is the unsung hero in maintaining fragile desert ecosystems. Measuring about 3 inches long and with a brush-tipped tongue that is as long its body, this species is the perfect pollinator. Every year, it migrates from its winter home in Mexico, following the “nectar trail” of blooming cacti and agave flowers to southern Arizona and New Mexico. Along the way as it drinks the sweet nectar, the lesser long-nosed bat picks up pollen, spreading it from flower to flower. Both the saguaro cactus and agave (which is used to make tequila) depend on the lesser long-nosed bat for pollination. When it was listed as an endangered species in 1988, there were fewer than 1,000 of these nectar-feeding bats. Today, there are an estimated 200,000 bats at 75 roosts in the Southwest and Mexico. Thanks to a three-decade-long conservation partnership, the bat was saved from extinction and delisted in 2018 -- making the lesser long-nosed bat a conservation success story. 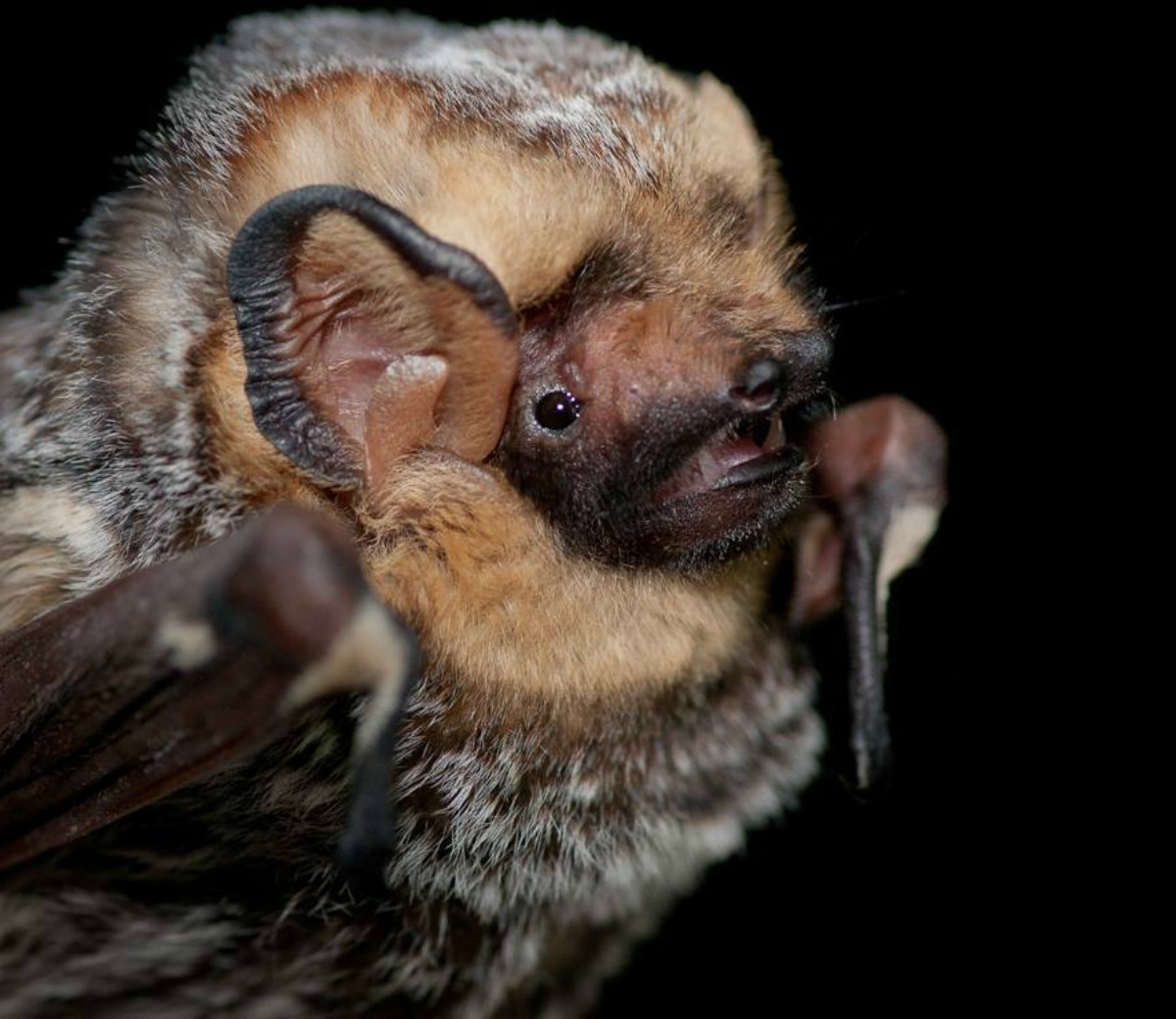 Hoary bats fest on moths, beetles and other insects, and travel up to 24 miles roundtrip in a night foraging for food. This one was spotted at Isle Royale National Park in Michigan. Photo by National Park Service.

The hoary bat is one of America’s most handsome bats. It has a wingspan of up to 16 inches and long, dense, white-tipped fur that gives it a frosted appearance. The hoary bat is among the most widespread of all bats, found throughout most of Canada and the United States, and south into Central and South America (there’s even a subspecies of the hoary bat in Hawaii). While this species is abundant, the hoary bat is also a solitary creature that’s rarely seen. They typically roost 10-15 feet up in trees and stay well-hidden in foliage during the day. The males spend the summer west of the Rockies and females to the east, and they don’t emerge from their trees to feed until after dark. But in the winter, you might be lucky to spot them at dusk as they begin their migration south in groups. 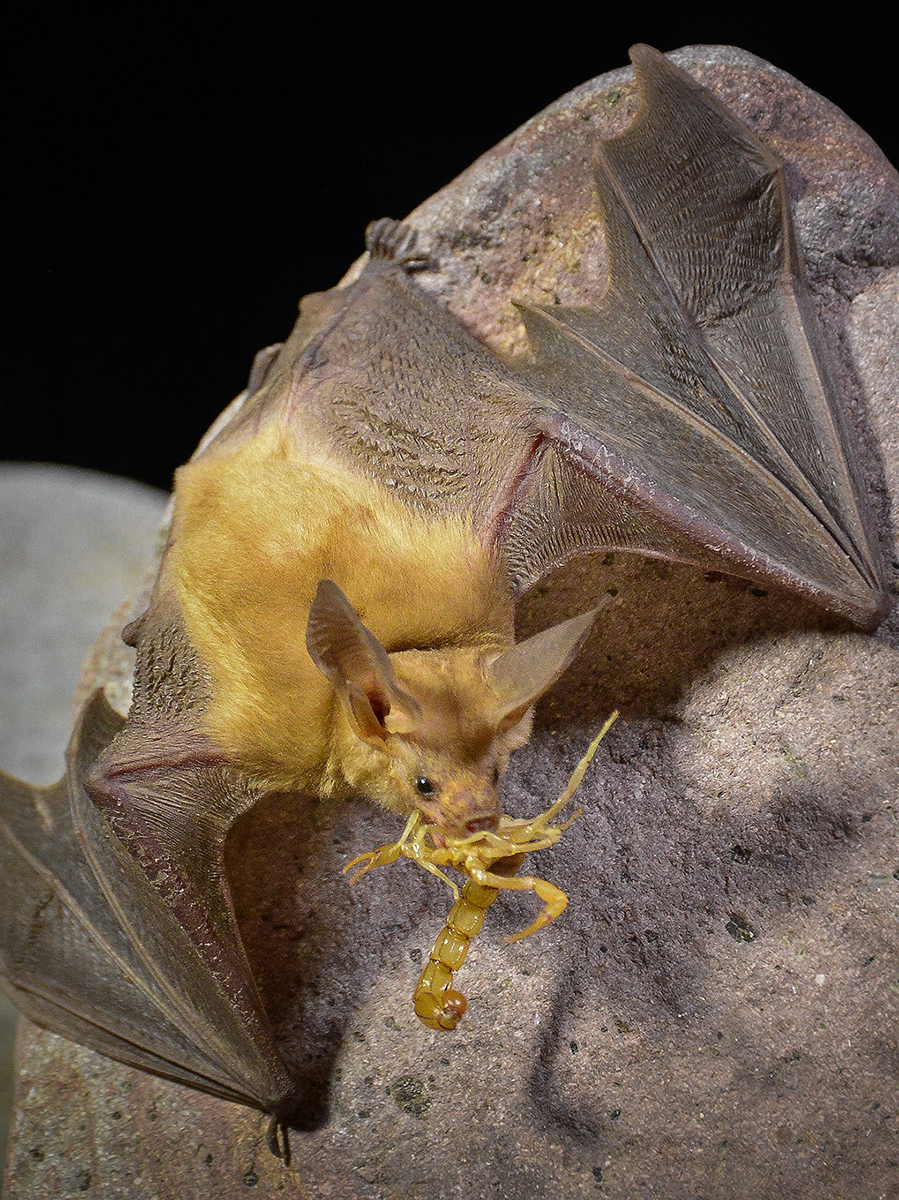 Known as a desert bat, the pallid bat is found in semi-arid regions across most of the American West. Its name comes from its light brown to cream-colored fur, which helps it blend into its surrounding. It’s about 4-4.5 inches long and boasts a wingspan of up to 15-16 inches. Unlike most bats, it doesn’t use echolocation to locate prey. Instead the pallid bat uses its long ears and simply listens. Swooping in silently from above, it eats crickets, beetles, grasshoppers -- even scorpions. These bats are hibernators, and they roost in colonies of 12-100 bats in dark, cool areas, which can include buildings, between rocks, and in caves or mines. Be careful not to scare these them, though. They emit a skunk-like odor when disturbed. 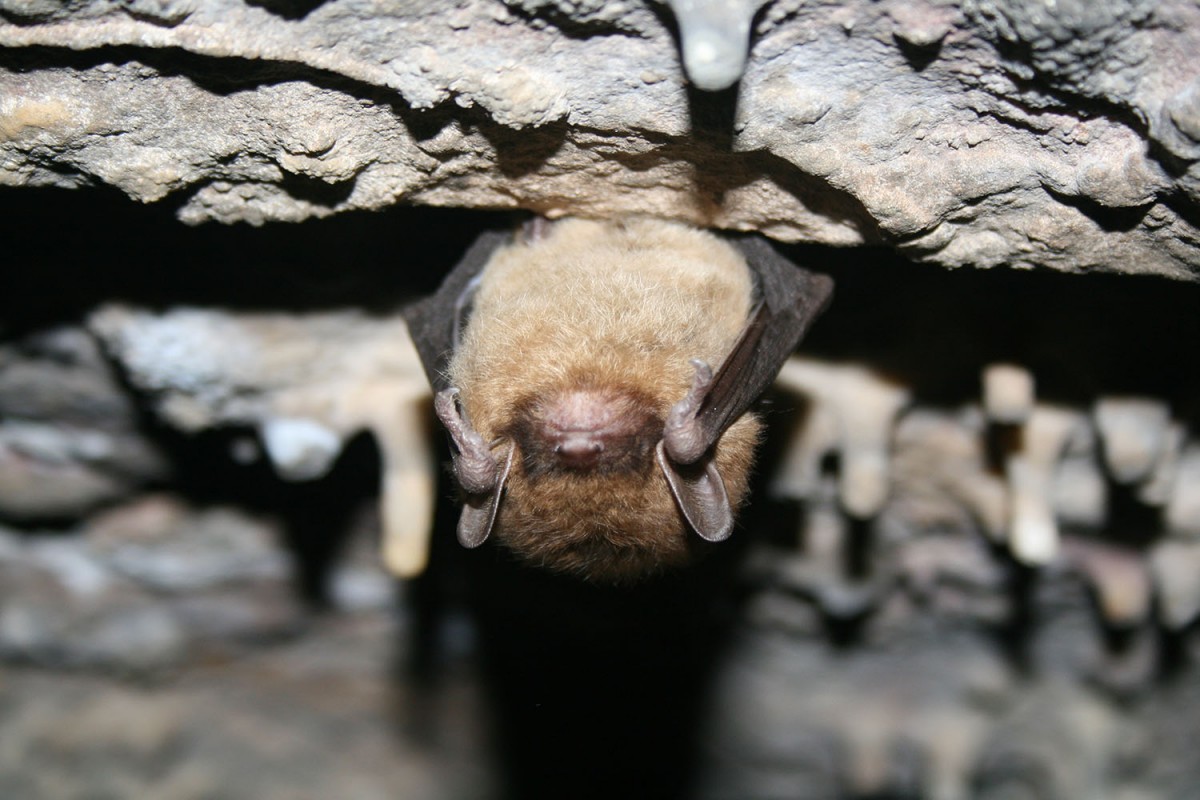 With a range from Alaska to central Mexico, the little brown bat is one of the most common bats found in North America. This tiny species weighs just a quarter to a third of an ounce and has a body no bigger than a human thumb, but despite its small size, the little brown bat has a big impact on humans. It can eat up to 1,200 insects (including pesky mosquitos) in an hour. This means fewer insects that carry diseases like malaria and West Nile virus, and useful pest control for farmers. Little brown bats hibernate in winter, congregating in the tens of thousands in caves and mine shafts. The little brown bat was one of the first bat species detected with white-nose syndrome, which damages wing tissue and depletes precious fatty deposits during hibernation by causing bats to wake up more frequently. Over 1 million little brown bats have died from white-nose syndrome. While there is no cure for white-nose syndrome, many scientists are working together to study the disease. There are several experimental treatments in progress that will hopefully lead to increased survival of bats from this devastating disease. 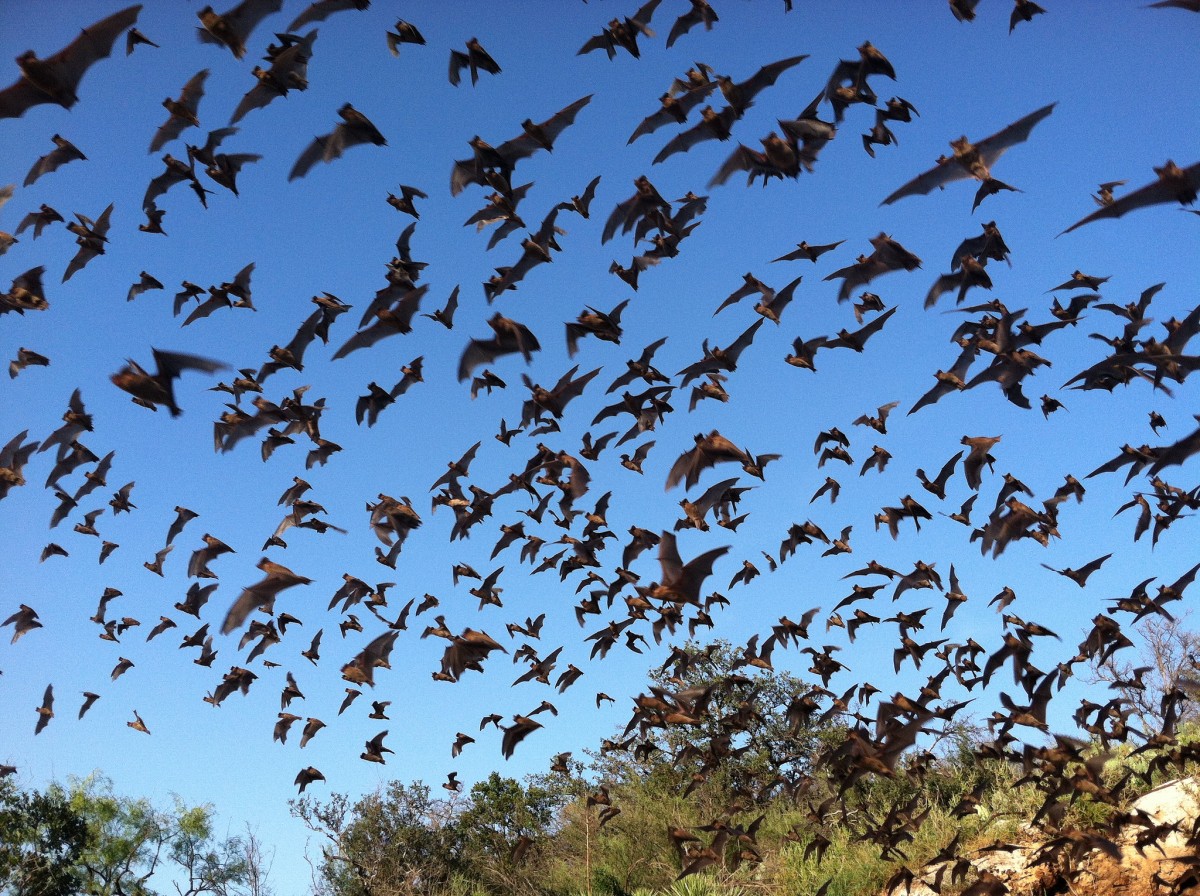 Bats are the only flying mammal, and their wings have the same type of bones that humans have in their arms and hands. Photo by Ann Froschauer, U.S. Fish and Wildlife Service.

The Mexican free-tailed bat is a subspecies of the Brazilian free-tailed bat that lives in the southern United States. There are over 100 million Mexican free-tailed bats in the U.S., with two of the largest populations in Carlsbad Caverns National Park in New Mexico and Bracken Cave near San Antonio, Texas. Every night from spring through autumn, the bats wow visitors as they swarm out of the caves in a whirling funnel to find water and food. It’s estimated that the 4,000 bats at Carlsbad Caverns eat about 3 tons of insects every night! These bats are strong, fast flyers -- reaching speeds of up to 60 miles per hour, flying as far as 50 miles from their roosts and in some cases as high as 10,000 feet in the air. While some of these bats hibernate, most migrate to Mexico for winter. 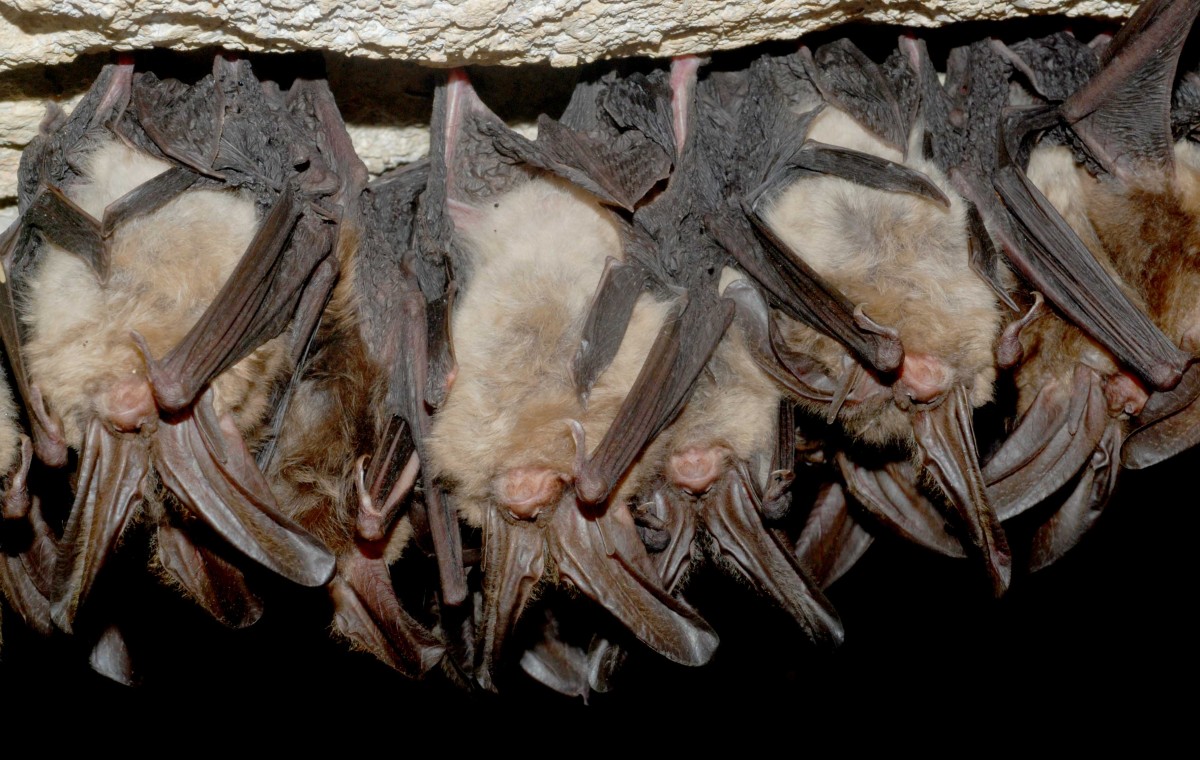 A cluster of hibernating healthy Virginia big-eared bats in Pendleton County, West Virginia. Every year while they hibernate, they lose half their autumn body weight before spring. Photo by Craig Stihler, WVDNR.

One of two subspecies of the Townsend’s big-eared bat, the Virginia big-eared bat is aptly named for its large ears, which are more than 1 inch long. This medium-sized bat can be found in Kentucky, North Carolina, Virginia and West Virginia, where it inhabits caves year round. In the early spring, females congregate in maternity colonies in the caves' warm areas and each give birth to a single pup. Within three weeks of their birth, offspring are able to fly, and by six weeks, they’re fully weaned. Then they can start going out on their own, using their highly efficient sonar to eat insects while flying through the air. While the fungus that caused white-nose syndrome has been found in the caves where they live, this species has yet to contract the disease. It’s a mystery that scientists are studying to see if certain bats are immune to white-nose syndrome. Even slight disturbances can cause Virginia big-eared bats to leave caves, abandon young and force bats to use valuable energy reserves needed to survive hibernation. Do your part to protect them by not entering caves during winter, and check out more ways to be friends to bats. 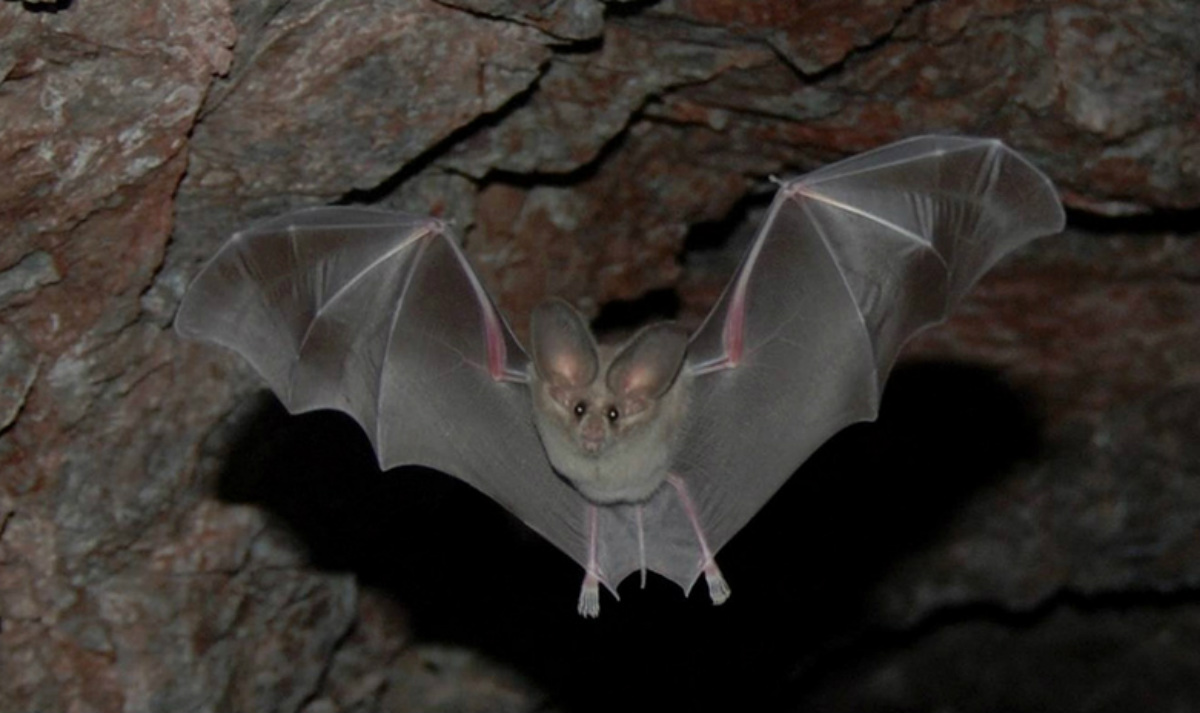 California leaf-nosed bats have short, broad wings that aren’t suited for long-distance flying. This one is leaving a cave at Lake Mead National Recreation Area. Photo by National Park Service.

Found in Southern California, Southern Nevada and parts of Arizona, the California leaf-nosed bat gets its name from the leaf-like projection on the tip of its snout -- it’s an adaptation on bats that sends out echolocation sounds through their noses. In addition to its nose, this bat is easy to recognize because of its large ears and grayish to dark brown fur. While other bats hibernate or migrate, the California leaf-nosed is active all year. It roosts in warmer caves and mines during the day and spends the night hunting. Its hearing is so acute that it can detect noises as faint as the footstep of a cricket! This bat species lives 20+ years in the wild, making it one of the longest-living mammals. 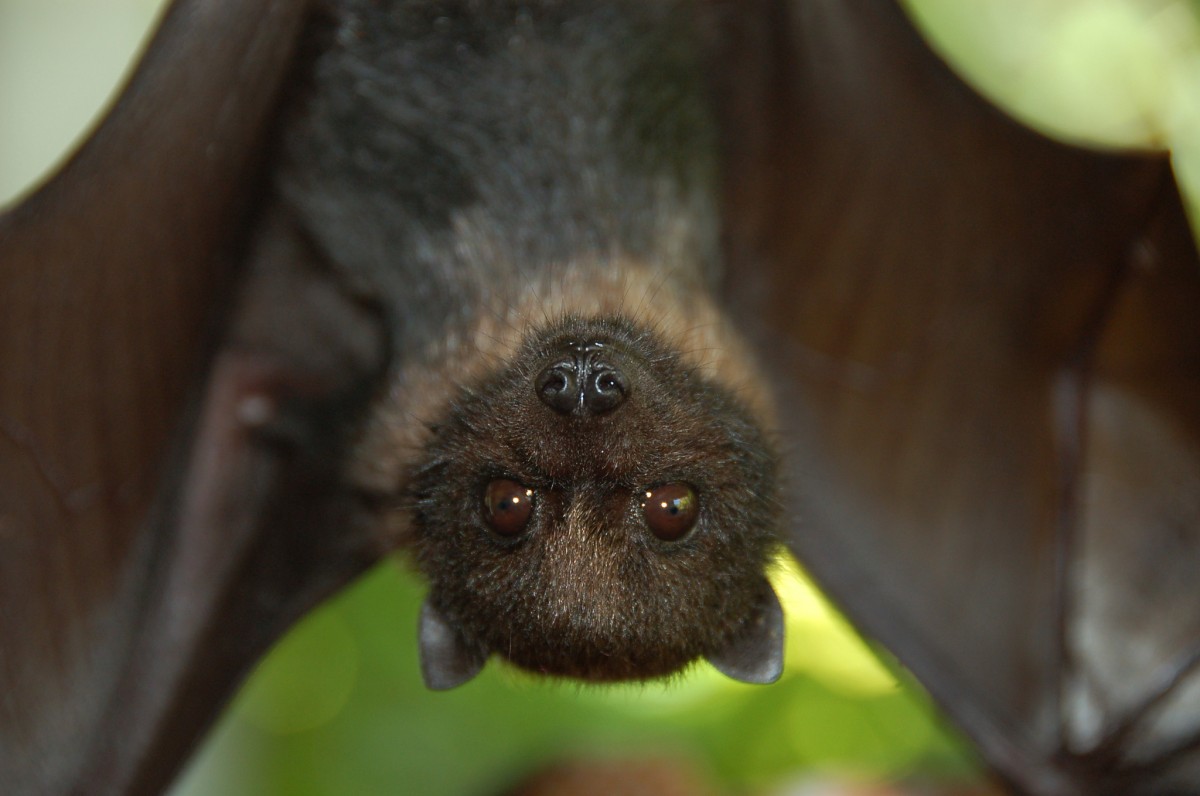 Mariana fruit bats have rounded ears and large eyes that give their faces a canine appearance -- hence the name flying fox. Photo by Anne Brooke, U.S. Fish and Wildlife Service.

The Mariana fruit bat -- also called the flying fox -- is one of the largest bats found in the United States. It measures in at 7.7-9.4 inches in length, can weigh up to 1.3 pounds and has a wingspan of up to 42 inches wide. This bat has dark fur, and its shoulders and neck are gold to pale brown in color. The Mariana fruit bat is found only in Guam, American Samoa and the Northern Mariana Islands, and it’s an important pollinator that’s essential for keeping forests and watersheds healthy. Its diet consists of mostly fruit (along with the occasional flower and leaves), and while it eats, it fertilizes fruits and nuts. The flying fox spends much of its day sleeping, and it can be seen hanging upside down on trees in the forest. Why do they sleep in this position? Hanging upside down has benefits for bats -- special tendons in their feet allow them to be relaxed and conserve energy, and this position allows for easy takeoff. 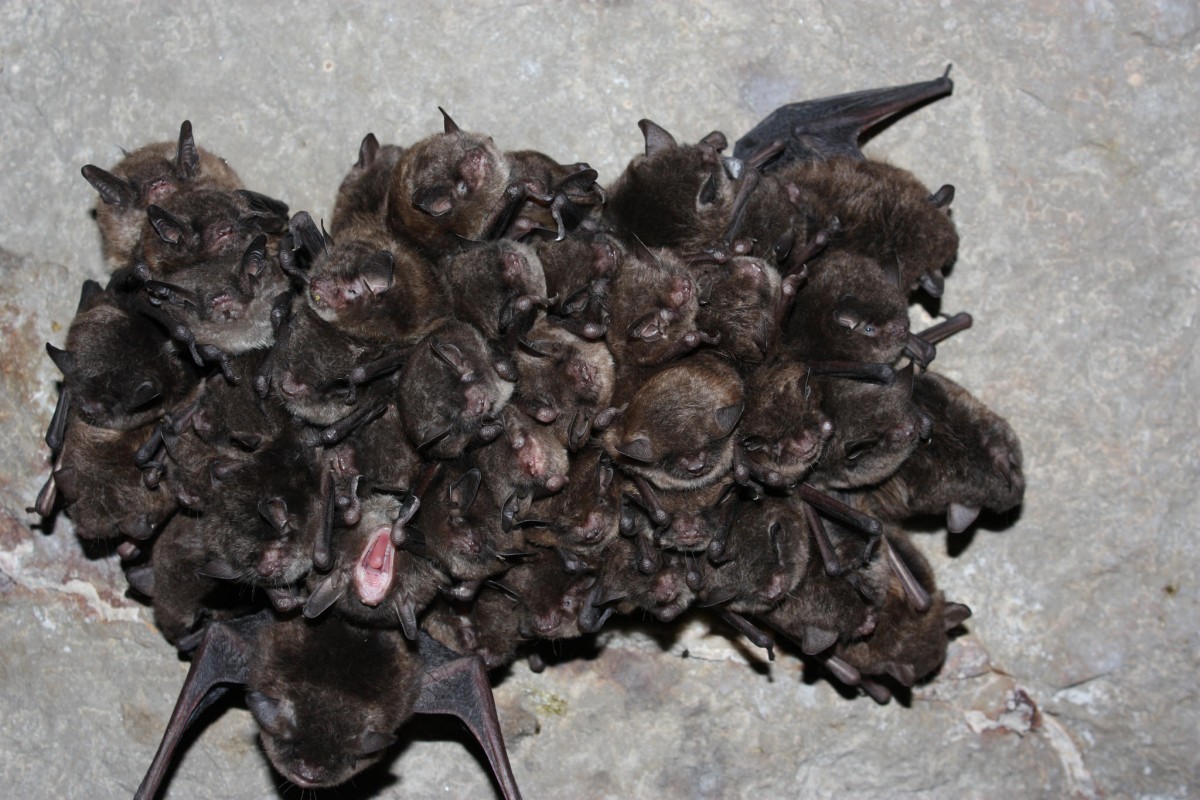 Who knew hibernating was so tiring? One bat yawns in a cluster of Indiana bats in Wyandotte Cave, Indiana. Photo by R. Andrew King, U.S. Fish and Wildlife Service.

First found in Southern Indiana’s Wyandotte Cave in the early 1900s, the Indiana bat is quite small, weighing only a quarter of an ounce (about the weight of three pennies). Even though it’s small, this species can eat up to half its body weight in insects each night, providing vital pest control. The Indiana bat’s scientific name is Myotis sodalis, and it’s an accurate description of this social species. Myotis means “mouse ear” and refers to the relatively small, mouse-like ears of the bats, and sodalis is the Latin word for “companion.” In the winter, Indiana bats hibernate in large numbers in caves (and occasionally abandoned mines) with the biggest colony supporting 20,000-50,000 bats! While found throughout the Eastern United States, more than half of their population hibernates in the caves in Southern Indiana.

Do your part to help bats by building a bat house. These tiny structures are a win for both bats and humans. They can hold up to 100 bats, providing them with much need roosts while the bats keep the pests at bay around your house.
Source: DOI