October 28, 2018 - As the hottest, driest and lowest national park, Death Valley is a land of extremes. More than just a scorching desert, Death Valley offers park visitors a striking contrast of landscapes to explore -- from the snow that frosts the park’s towering peaks to the lush wildflower meadows and small oases that provide a reprieve from the heat to seemingly endless desert plains.

Established on October 24, 1994, Death Valley National Park is a beautiful but challenging landscape where unique wildlife have developed ingenious adaptations to the arid, harsh environment. Located in both California and Nevada, it’s the largest national park in the lower 48 states and has nearly 1,000 miles of roads that provide access to both popular and remote locations in the park. In celebration of the park’s anniversary, here are 12 things you might not have known about Death Valley!

1. Death Valley is the lowest point in North America. At 282 feet below sea level, Badwater Basin is a surreal landscape that tricks the senses. What many visitors mistake for snow covering the ground is actually a thick layer of salt on the valley floor. But how did the salt get there? Rain and minerals dissolved from rocks drain to lower elevations. Here, at Badwater Basin, the water forms temporary lakes after heavy storms. As the water evaporates, minerals concentrate until only the salts remain. After thousands of years, enough salts have settled here at the bottom of the continent to create this vast, surreal scene. 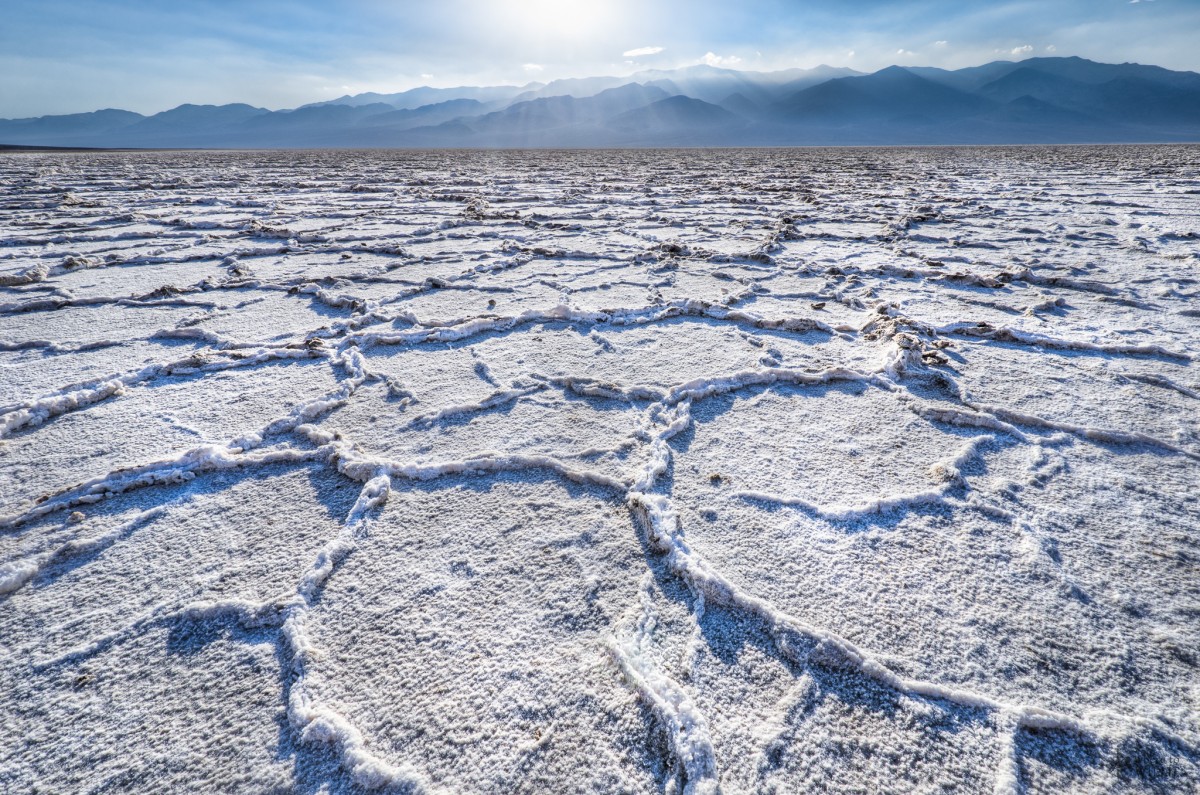 2. You can’t beat the heat at Death Valley. In July 2018, the hottest place on Earth experienced its hottest month on record. The average temperature was 108.1⁰F including overnight lows. Daytime highs reached a temperature of 127⁰F for four days in a row. This kind of heat can be dangerous, but that doesn’t mean you can’t explore the park in the summer. Visitors are urged to stay in well-traveled areas of the park, so that other people might provide help in case of a vehicle break-down. Be sure to come prepared -- cell phones often have no reception in the park. Other tips for a safe visit include drinking plenty of water, eating snacks, limiting activities outside of air-conditioning and visiting viewpoints at higher, cooler elevations. Also, just because you can fry an egg in the heat, doesn’t mean you should. 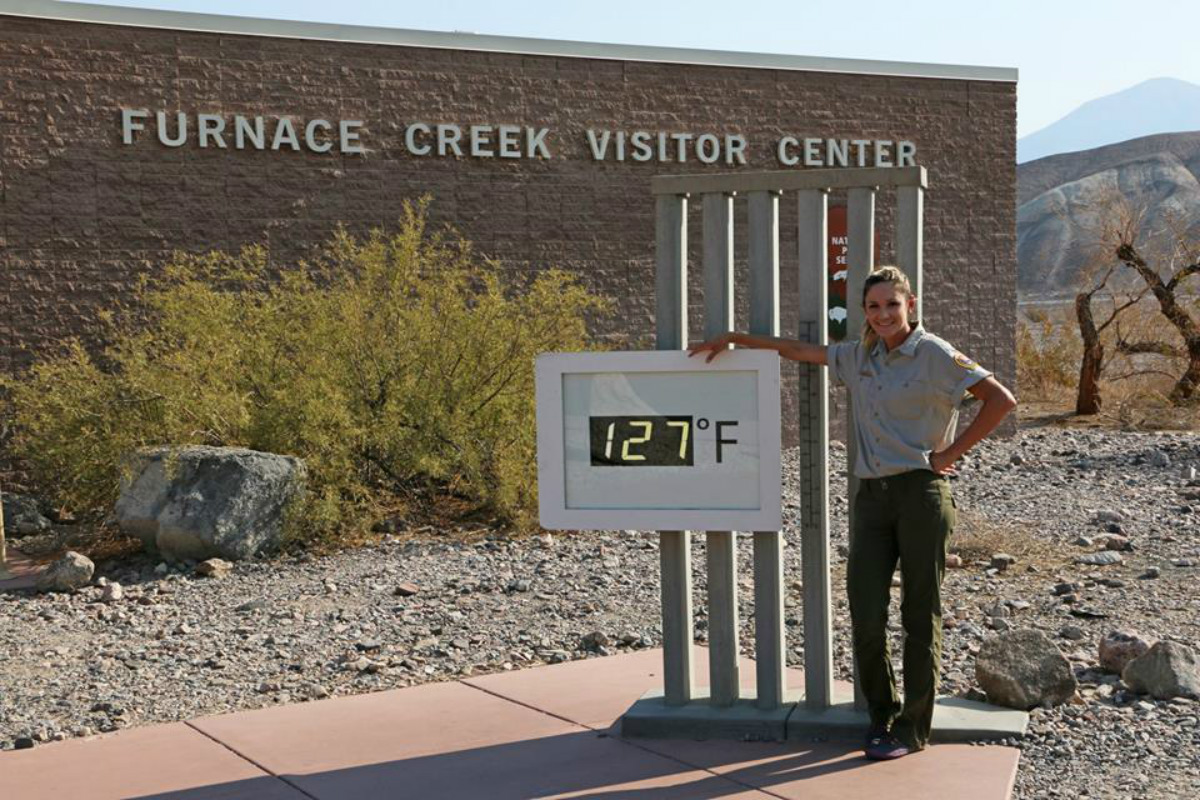 3. Wildflowers bring life to the desert. Contrary to its name, Death Valley comes alive with color and life in the spring. While the park is famous for its rare and spectacular wildflower displays, flowers are never totally absent in the off years. When conditions are right, the hills and valleys explode into a carpet of gold, purple, pink or white flowers. Deep soaking rain is essential for a desert floral display. To begin, a rainstorm of a half inch or more is needed to wash the protective coating off wildflower seeds and allow them to sprout. For plants to continue growing, rainstorms must come at evenly-spaced intervals throughout the winter and spring. Superblooms are fleeting, but they leave a lasting impression with park visitors and attract large numbers of pollinators such as butterflies, hummingbirds and bees. Check out the park’s annual wildflower update for the best times and trails to visit. 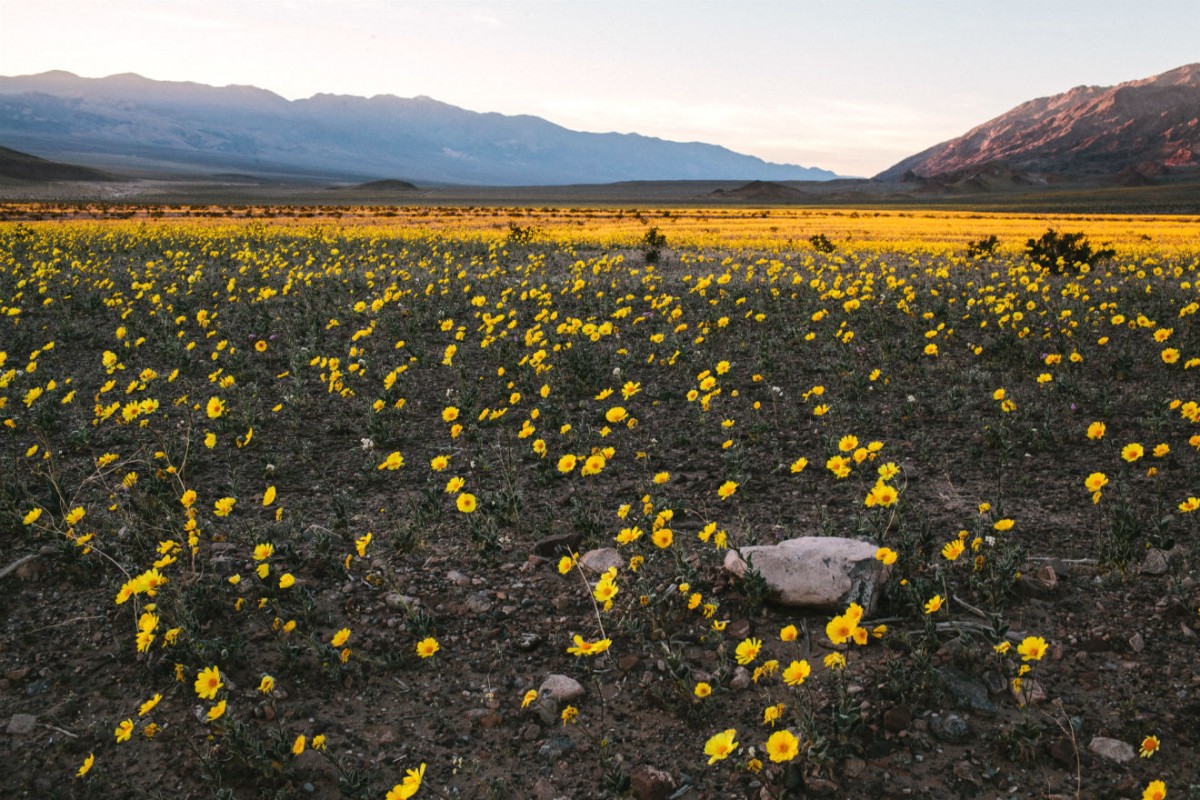 4. Some of the rocks move on their own at Death Valley. Racetrack Playa is home to one of Death Valley’s most enduring mysteries. Scattered across the bottom of this dry lakebed are hundreds of rocks that leave trails on the ground when they move. Some of the rocks, which weigh up to 700 pounds, have traveled over 1,500 feet. For years, the source of their movement has gone unsolved, but in 2014 researchers discovered a rare combination of events that move the rocks. When the playa floods and cold winter nights freeze the water into a thin layer of ice that then break into large floating panels as night turns into day, winds drive the rocks forward across the slippery surface, which leave trails in the soft mud below. Although scientists have discovered the secret of the moving rocks, the fascination remains the same. 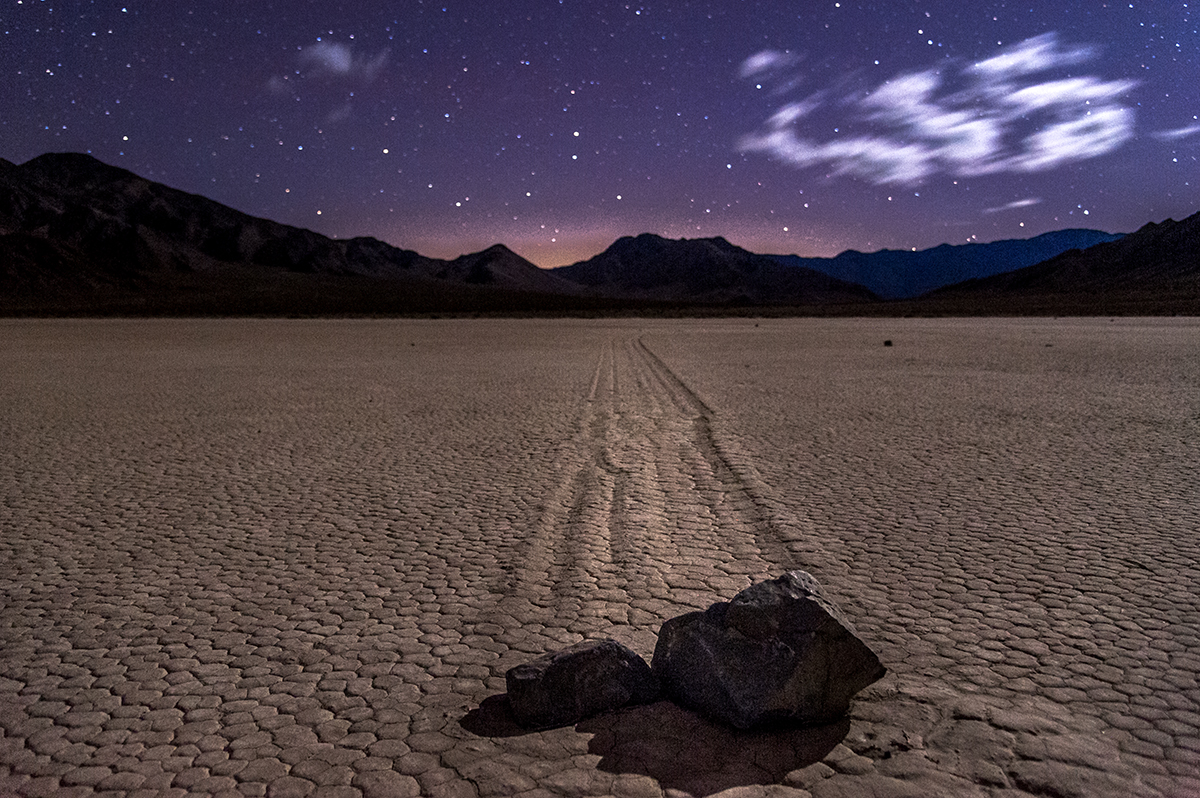 Rocks and their trails lit by the moonlight. Photo by Cat Connor (www.sharetheexperience.org).

5. If you listen closely, the sands will sing to you. Although sand dunes are only a small portion of Death Valley, the shadowed ripples and stark, graceful curves are some of the most memorable sights in the park. While Mesquite Flat Sand Dunes are the easiest to visit and the only location where sand boarding is allowed, Eureka Sand Dunes are much taller -- rising over 680 feet. At the top of the sand dunes, you can experience one of the strangest phenomena of the desert: singing sand. When the sand slides down the steep faces of high dunes, a sound like the bass note of a pipe organ or the distant drone of an airplane can be heard. The reason for this occurrence is unknown, but it’s most likely caused by the friction between sand grains. There are few other places on earth where the beautiful songs of nature call so loudly to visitors. 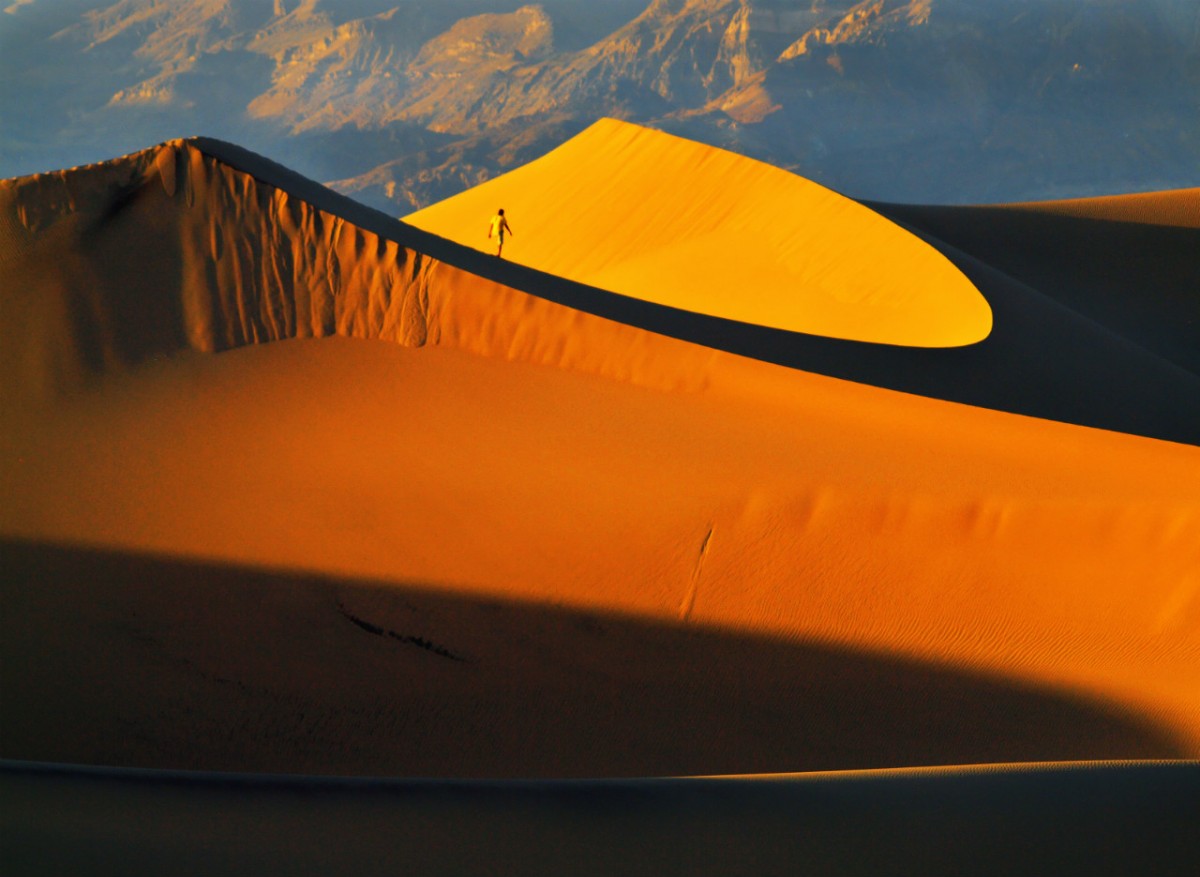 The sun sets on the Mesquite Sand Dunes. Photo by Alla Gill (www.sharetheexperience.org).

6. Beep! Beep! Watch out for the roadrunner. The small roadrunner -- less than 2 feet tall and weighing about 1 pound -- has achieved international fame. The long-legged bird was featured alongside its cartoon arch nemesis, Wile E. Coyote, on the Looney Tunes’ TV show. At Death Valley, it’s one of the most common wildlife species spotted. That’s because its high body temperature allows it to be out in the heat of the day. The roadrunner is one of hundreds of birds in the park. Birdwatchersshould visit Furnace Creek where animals are attracted to the oasis for water and shade.

Roadrunner streaks across the terrain. Photo by National Park Service.

7. Devils Golf Course isn’t meant for golfing. Devils Golf Course -- which got its name because “only the devil could play golf” on its surface --  is a colorful landscape worn by wind and rain into beautiful jagged spires. If you listen carefully, you can hear the tiny pops of billions of tiny salt crystals expanding and contracting in the heat. The sculpted salt formations form a rugged terrain that is simultaneously delicate yet dramatic. Make sure to bring your camera along to capture the land’s beauty formed through hundreds of years of nature’s processes. 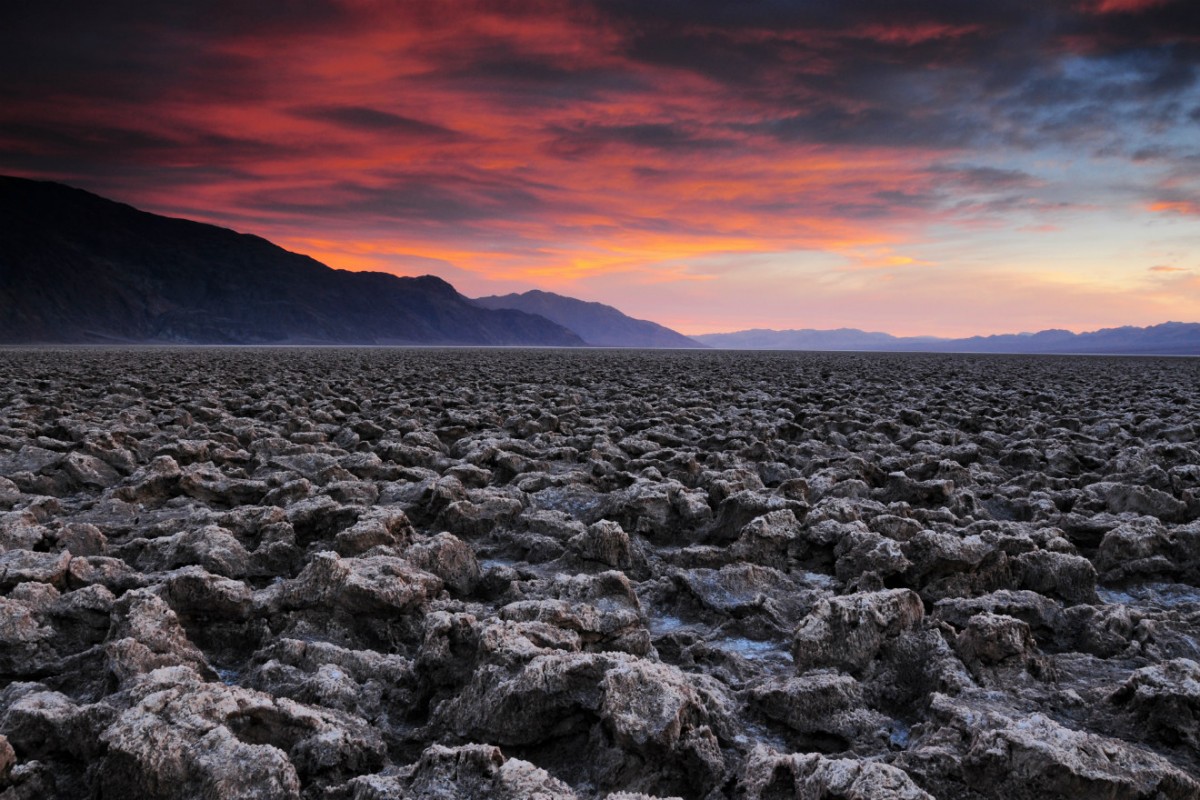 A break in the clouds at twilight reveals the rugged terrain of the Devils Golf Course. Photo by Michel Hersen (www.sharetheexperience.org).

8. You can see a galaxy far, far away in the park. Are you a Star Wars fan? Ever wanted to visit Tatooine? Now you finally can. Jump in your car and wind through Artists Drive, an unbelievable area of multicolored, eroded hills. Oxidation of natural metal deposits in the mountains produce gorgeous shades of green, blue and purple that resemble an artist’s colorful palette. Since your vehicle can’t cruise as fast as the Millenium Falcon, take your time to enjoy the beautiful scenery and spot locations featured in the movie Star Wars: A New Hope. Other movies and TV shows filmed at Death Valley include Spartacus, The Twilight Zone and Tarzan.

The colorful mountains of Artists Palette.Photo by Blair Radford (www.sharetheexperience.org).

9. The Charcoal Kilns are a remnant of the park’s history. Odd beehive-like structures of the Wildrose Charcoal Kilns stand 25 feet tall and preserve the history of Death Valley in their walls. Built in 1877 by American Indian, Hispanic and Chinese workers, the kilns provided a source of fuel suitable for use in two smelters at nearby lead-silver mines until 1900. They’re more remote than the park’s more popular sites but are one of the best preserved and unique attractions. Visitors today can explore the kilns and hear the stories of the people who built them. 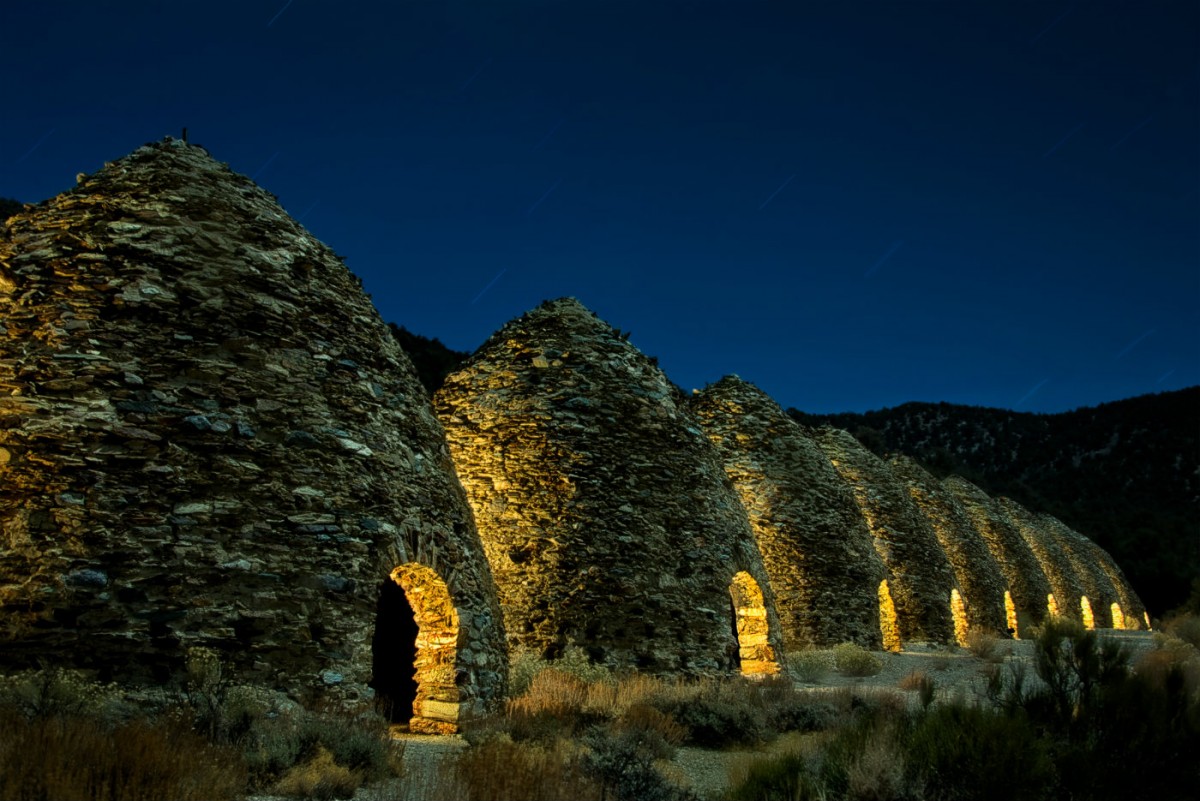 10. A volcanic explosion left its mark in Death Valley. The awe inspiring Ubehebe Crater is over 600 feet deep and half a mile wide. The massive crater was formed about 2,100 years ago, but the most recent explosion might have happened as recently as 300 years ago. The crater’s sheer size dwarfs visitors and provokes a feeling of wonder for nature’s power. Local Native American tribes refer to the crater as "Tem-pin-tta- Wo’sah," meaning Coyote’s Basket. The entire crater can be viewed from a parking lot on its rim, but further exploration on trails reveal additional smaller craters and the fascinating effects of erosion. 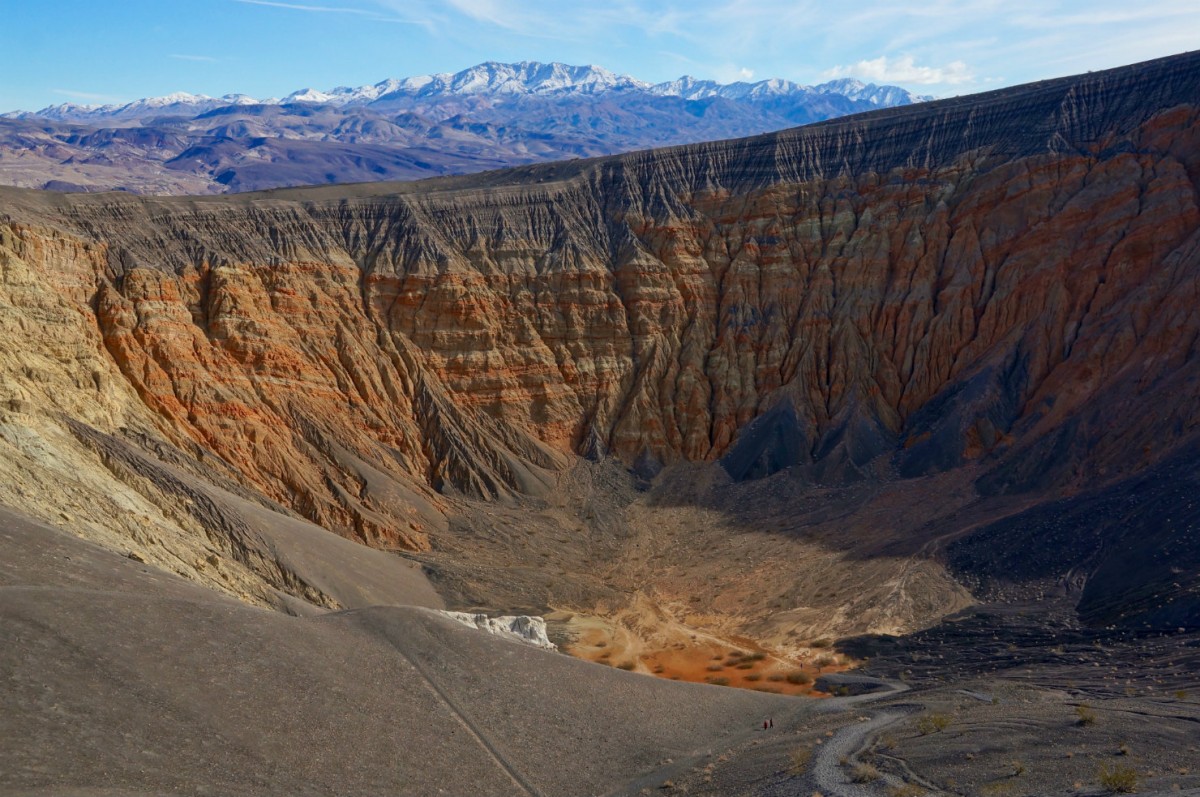 11. Really, there are fish in Death Valley. Finding fish in the desert doesn’t sound possible, but surprisingly there are six species of fish that can survive in the salty waters and harsh conditions of Death Valley. One of them is the endangered Devils Hole Pupfish. It only resides in the 93 degree waters of Devils Hole, where water temperatures and oxygen concentrations are lethal to most other fish. These inch-long iridescent blue pupfish are one of the world’s rarest fish. Learn how scientists are working save these fish. 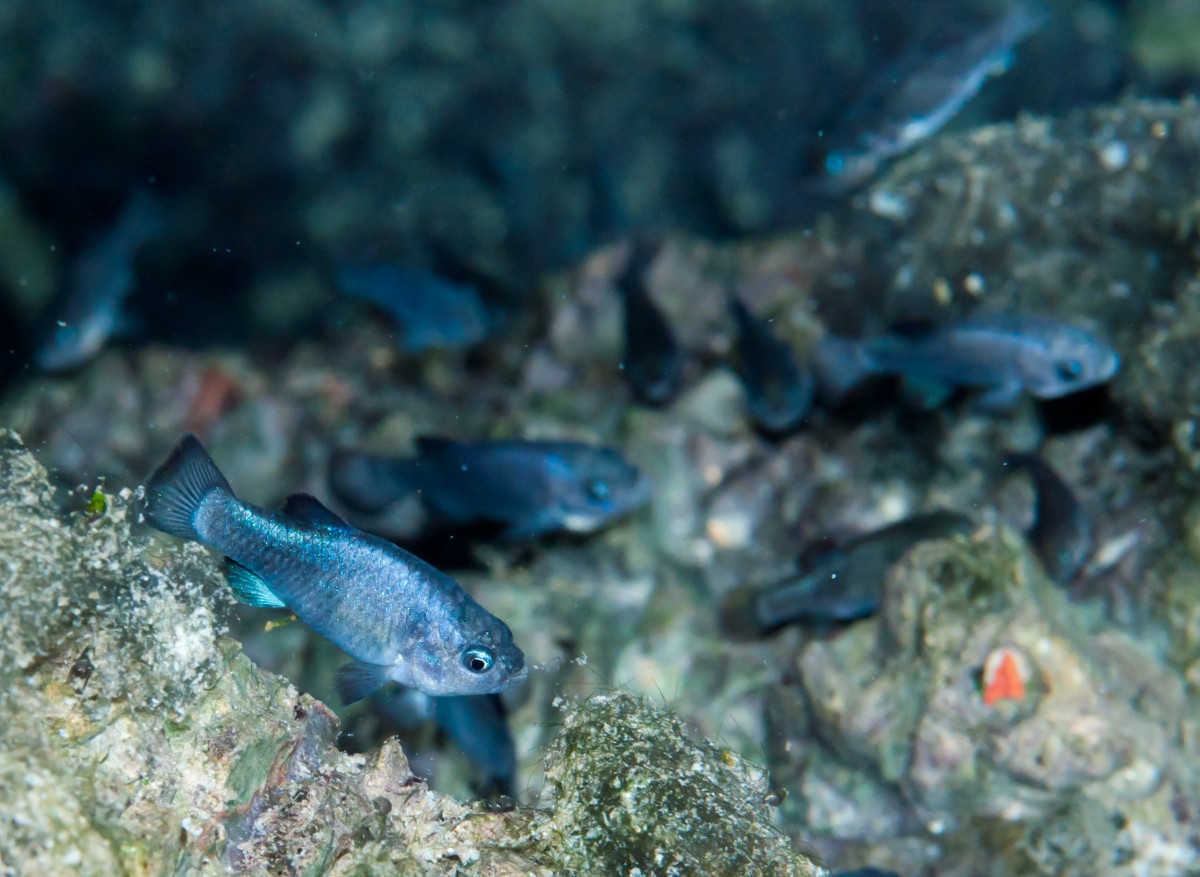 12. You may need more than one visit to truly experience the park. Death Valley is a vast national park with over 3 million acres of designated wilderness and hundreds of miles of backcountry roads. The park contains an amazing variety of terrain, historic sites, plants and animals for outdoor adventurers to discover on foot, by bike or in your car. And don’t forget, half the park is after dark! Death Valley has some of the darkest night skies in the country and is a great place to gaze in awe at the expanse of the Milky Way, see the details of the moon, track a meteor shower or simply reflect on your place in the universe. However you enjoy your time in the park, please remember to leave no trace, so everyone can enjoy Death Valley for generations to come. 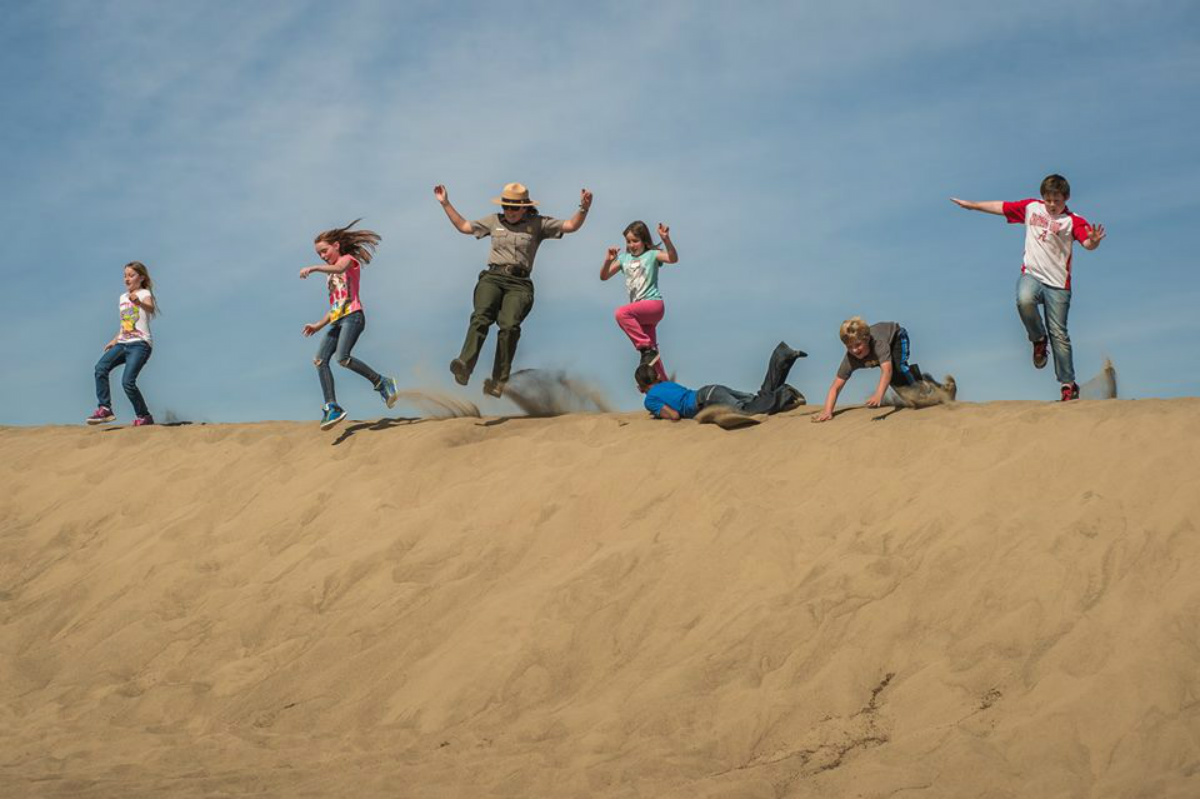 Fun with a park ranger. Photo by National Park Service.

Death Valley is full of life, from vibrant wildflowers and unique species to a cultured past and scenic landscapes. Which will you explore first?
Source: DOI