Southern Sierra Miwuk Tribe are Featured in a New Documentary - Screening in Mariposa on Saturday, February 8, 2020

Tickets Now on Sale at the Mariposa Visitor Center and eventbrite.com

January 13, 2020 - The new “Miwuk” documentary, about our Southern Sierra Miwuk Tribe whose ancestors date back thousands of years here in Mariposa County will be screened at the Mariposa High School Auditorium (located at 5074 Old Hwy N) at 6:00 P.M. on Saturday, February 8, 2020.

7 members of The Southern Sierra Miwuk Tribe tell their stories of growing up here in Mariposa and Yosemite National Park and their tribe’s effort to be recognized by the Federal Government, which began in the 19th Century and continues to this day. The individuals reveal stories that many people don’t know to this day, backed up by documents from the United States Government, as well as University research departments from all over the country.

Produced and edited by veteran Warner Bros. television editor, Bill Lowe.  “Some of the stories are heartwarming, and some are heartbreaking.  I wanted the public to see a rare look inside the Southern Sierra Miwuk world.  I hope afterwards, the viewer will have a better understanding of the Miwuk. “

The Miwuk film will be projected by a laser projection system onto a new large 36-foot wide screen in the Mariposa High School Auditorium with stereo sound,  “We wanted to make sure that everyone in the auditorium will be able to see and hear this film,” says Bill Lowe

Following the screening, members of the tribe will discuss and answer questions on the subject.

Tickets for the event are $10.  They are on sale now at the Visitor Center in Mariposa and online at eventbrite.com.

Beverlyville Indian Tacos will be on sale outside the auditorium from 1:00 P.M. to 5:00 P.M. prior to the screening.

All proceed from the event go to the Southern Sierra Miwuk Federal Recognition efforts.   The American Indian Council of Mariposa County is sponsoring the screening. 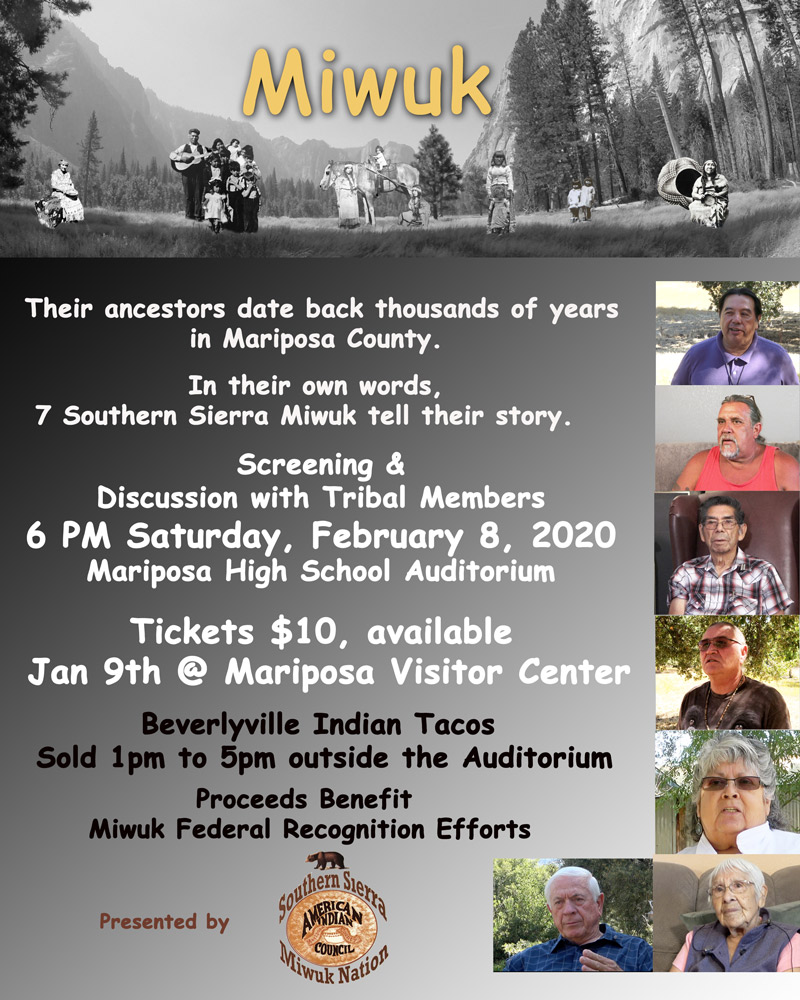 Related: Southern Sierra Miwuk Tribe is the Focus of a New Documentary