September 25, 2017 - One month after Hurricane Harvey made landfall in Texas, motorists are finally seeing consistent declines in gas prices. At $2.57, today’s national average is five cents less than a week ago, 22 cents more expensive than a month ago and 36 cents more than a year ago.

“Gas prices are getting cheaper by the day,” said Jeanette Casselano, AAA spokesperson. “Pump prices may not be dropping as fast as motorists would like, but with the switchover to winter-blend gasoline, consumer demand beginning to slow and Gulf Coast refineries getting closer to normal operations, consumers can expect gas prices to continue to be less expensive through October.”

For a second straight week, the Great Lakes and Central states are seeing the largest drops on the week: Indiana (-12 cents), Michigan (-12 cent), Kentucky (-11 cents) and Ohio (-10 cents).

According to the Department of Energy, Gulf Coast refinery operations were up nearly 10 percent for the week ending September 15. Overall, 10 refineries are operating at reduced rates, while three remain shutdown. In addition, the Colonial Pipeline remains on about a seven-day gasoline delivery delay, but they estimate that by the end of the month the pipeline will be returning to normal deliveries. 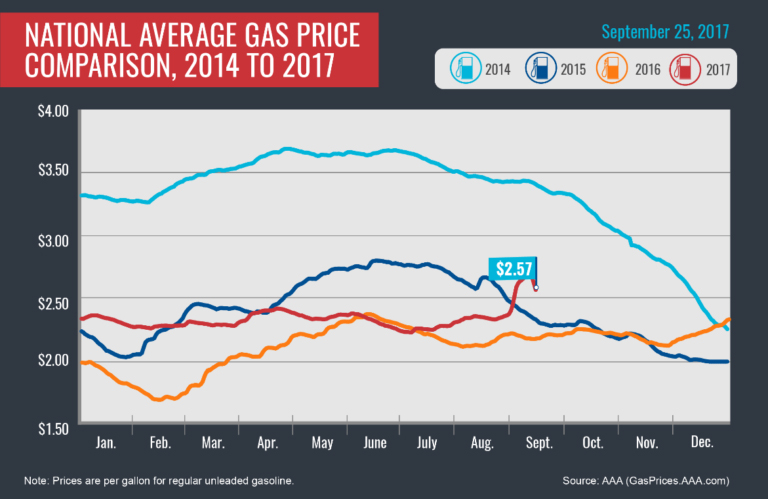 Gas prices are cheaper on the week in all South and Southeast states with a five-cent drop in Florida ($2.67). With more than 4 million bbl of gasoline delivered in response to Hurricane Irma, the majority of Florida gas stations are operating with sufficient supply, according to OPIS.

In the region, gas prices are 30 cents more expensive compared to one month ago. However, continued positive refinery news is expected to drive down gas prices in the coming weeks, easing the higher-than-normal gas prices South and Southeast motorists have been paying since Hurricanes Harvey and Irma made landfall.

Four Mid-Atlantic and Northeast states land on this week’s top 10 states with the biggest decreases: Delaware (-12 cents), Maine (-10 cents), Maryland (-9 cents) and New Jersey (-8 cents). All states in the region are paying less for a gallon of gasoline than a week ago with Washington, D.C. and Rhode Island seeing the smallest decrease (-3 cents). Conversely, as compared to one month ago, Rhode Islanders are paying 35 cents more on the gallon, followed by Massachusetts (+35 cent), Connecticut (+34 cents) and New Hampshire (+33 cents).

Compared to the prior week’s 5.7 million bbl drop, gasoline inventories took a small decrease of only 1.4 million bbl on the week, according to the Energy Information Administration (EIA). As demands slow with the onset of fall, gas prices in the Mid-Atlantic and Northeast will continue to decrease in the coming weeks.

For a second straight week, the Midwest and Central states are seeing some of the largest declines in gas prices and some of the cheapest gas in the country.

Compared to one month ago, Indiana (-12 cents), Michigan (-7 cents) and Ohio (-3 cents) are the only three states in the country paying less at the pump. This year, the Great Lakes and Central states have been very volatile – experiencing large jumps one week followed by large decrease the following week. This trend in mind, it is not surprising to see three states are paying less than pre-Harvey gas prices.

Additionally, gasoline inventories jumped 1.3 million bbl in the Great Lakes and Central states – the largest of any region in the country – which contributes to the drop in gas prices. The only other region to see a build on the week was the West Coast, according to the EIA.

The West Coast was one of only two regions that saw gasoline inventories build on the week. With an addition of 600,000 bbl, total inventories register at 27.7 million bbl – about one million less than a year ago.

With a 200,000 bbl drop, gasoline inventories sit at 6.3 million bbl, which is about a half a million less than this time last year.

At the close of Friday’s trading session on the NYMEX, WTI increased 11 cents to settle at $50.66. Moving into Monday, the price per barrel is poised to stay above $50 as the market looks for signs that the global crude glut is continuing to shrink, which is not the first time this year it has made that move. One important indicator of the crude supply decline is that the number of active oil rigs in the U.S. is reducing. According to Baker Hughes, Inc., the number of active rigs dropped by five to total 744 last week, signaling that drilling operations are reducing in the U.S. and could mean that the U.S. market may tighten in the months ahead. The trend has been continuing for the last few weeks. As the impact of Harvey and Irma continues to subside, this week’s EIA report may provide more accurate information on the current state of draws from oil inventories and give the market more signs of less supply available for the production of refined products like gasoline.

Last week, the price per barrel moved above the $50 per barrel mark after the market watched OPEC’s Joint Ministerial Monitoring Committee (JMMC) meeting in Vienna. The JMMC is charged with monitoring the agreement between OPEC and non-OPEC producers to cut global production by 1.8 million barrels per day (bpd). The JMMC’s analysis showed that compliance in August was 116 percent of their pledged oil output cuts, which is up from 94 percent in July. According to OPEC, the cartel’s strategy is working and is helping global crude inventories to move closer to their five-year average. This move has led the price per barrel of oil to continue moving upward, as it has since issuance of this report last Monday. OPEC’s next formal meeting will be held on November 30 in Vienna, where parties that are a part of the production reduction agreement may decide to deepen and extend the current agreement beyond March 2018.