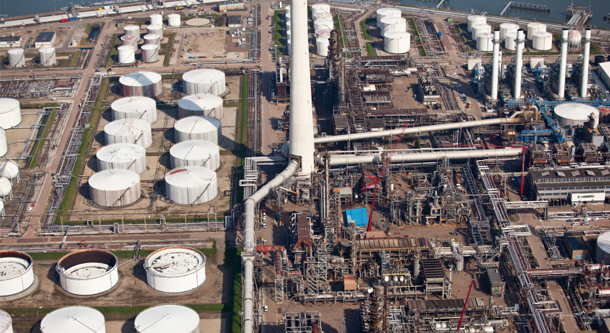 October 2, 2017 - At $2.55, the national gas price average is just two cents cheaper on the week and the most expensive pump price seen at start of October since 2015, when motorists where paying $2.29 for a gallon of unleaded.

“When fall arrives, motorists expect gas prices to be cheaper than they were in the summer. That’s just not the case this year,” said Jeanette Casselano, AAA spokesperson. “Back-to-back hurricanes packed a punch to Gulf Coast refineries’ gasoline production and inventory levels. As they play catch-up, gas prices are going to be higher than we’d like to see.” 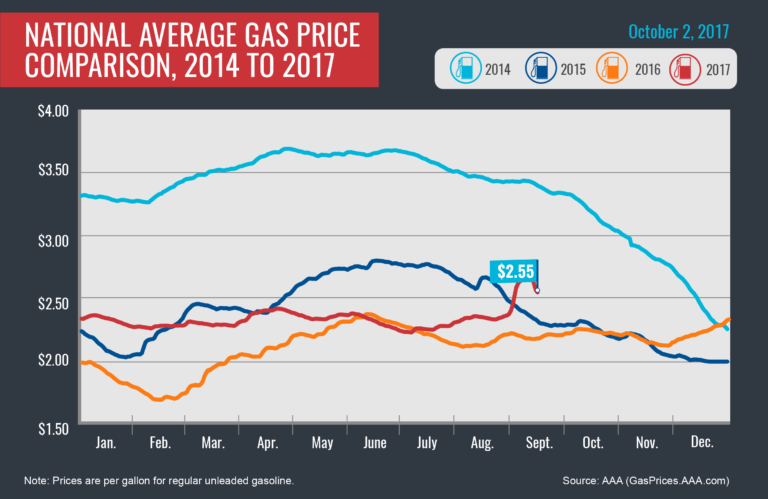 Today, Gulf Coast refineries are building toward resuming normal operations, but it could take some longer than others to return to pre-hurricane production rates. The Energy Information Administration (EIA) reports that Gulf Coast utilization rates are up nearly 12 percent to 85 percent of capacity since last week. As utilization rates increase and operations improve, gas prices will drop.

“While the market continues to be volatile, post-hurricanes, AAA expects gas prices to slowly, but steadily drop by up to ten cents in the coming month,” added Casselano.

Across the country, the majority of states saw prices at the pump drop as much as eight cents on the week – with Mid-Atlantic and Northeast states benefiting the most. While five Great Lakes and Central States are paying up to 11 cents more for gas. Today, motorists can find gas for $2.50 or less at 56 percent of gas stations in the country.

Despite a two million bbl drop on the week in gasoline inventory, the South and Southeast tout the highest inventory level of any region in the U.S. However, sitting at 74.2 million bbl, the region’s gasoline inventories are at the lowest level for the region since November 2015, according to EIA data. As Gulf Coast refineries come back online and inventory levels build, gas prices will continue to drop, possibly bringing the lowest pump price by year-end.

Four Mid-Atlantic and Northeast states top this week’s 10 states list with the biggest decreases: Delaware (-8 cents), New Jersey (-6 cents), Maryland (-6 cents) and Maine (-6 cents). Despite a five-cent drop in price on the week, Pennsylvania ($2.77) is selling some of the most expensive gas in the country and region alongside Connecticut ($2.78) and Washington, D.C. ($2.77). All three are on this week’s top ten most expensive markets.

After five weeks of straight gasoline inventory drops, the EIA reports a 2.4 million bbl build in the region. The increase brings levels to 55.8 million bbl, which is just 400,000 bbl less than this time last year.

Unlike any other region in the country, five Great Lakes and Central states are paying more for a gallon of gasoline on the week: Indiana (+11 cents), Ohio (+9 cents), Michigan (+9 cents), Illinois (+7 cents) and Wisconsin (+2 cent). Of note, last week Indiana, Michigan, Ohio and Illinois saw gas prices drop almost as much as they increased this week. As stated in previous reports, the region often sees volatile drops and increases from week to week. All other states in the region are paying five to one cents less at the pump compared to one week ago.

Gasoline inventories took a small drop, about 500,000 bbl, on the week. The South and Southeast was the only other region to see levels drop, according to the EIA.

According to the EIA, West Coast gasoline inventories have steadily climbed for one month. The last week added 1 million bbl, bringing the total to 28.7 million bbl and above levels this time last year.

With a 300,000 bbl build, gasoline inventories sit at 6.6 million bbl, which is the highest levels seen since mid-July for the region. The Rockies often carry low inventory levels throughout the summer due to significant seasonal tourism.

At the close of the NYMEX on Friday, WTI was up 11 cents to settle at $51.67/bbl, having fluctuated but made strong gains on the week. When the price per barrel of oil is above the $50 benchmark, which has happened a few this time year, this can be contributed to increased oil prices and overall benefits oil producers. Moving into this week, the market may stay above the $50 mark if there are further indications that production is tightening, which will likely lead to reduced global inventories, while demand for products refined from oil is strong. Increased rig counts and more oil production are key indicators analyzed for their impact on the market. As the week progresses, other indicators, such as less production by OPEC countries, will be reviewed by market watchers and assessed for impact on prices.

On the production front, indicators from last week show that oil production may still be increasing. For example, according to Baker Hughes, Inc., active oil rigs in the U.S. increased by six. This brings the total oil rig number to 750, which is 325 more than this time last year and an increase after seven weeks of decline. According to another indicator, found in last week’s EIA report, total U.S. crude oil production is running roughly 1 million b/d higher than a year ago. An increase in both indicators has signaled to the market that production from the U.S. is not slowing and could mean that global efforts by OPEC to reduce supply have stalled, curtailing additional oil price increases in the market. An increase in U.S. production means that the U.S. could export to countries with growing demand or replenish global and domestic inventories that continue to remain high. Ultimately, this could stall global efforts by OPEC to reduce supply, curtailing additional oil price increases in the market.

On the supply front, total gasoline output is strong. According to last week’s EIA report, output registered at 9.679 million b/d, an increase of 139,000 b/d from last week. For the market, this could be a sign that oil demand is holding strong — especially after Hurricanes Harvey and Irma caused disruptions to energy delivery systems in the U.S. – and can be an indicator that global inventories will continue declining (because of steady demand). However, overall fall gasoline demand may not be enough to drain high U.S. oil inventories.