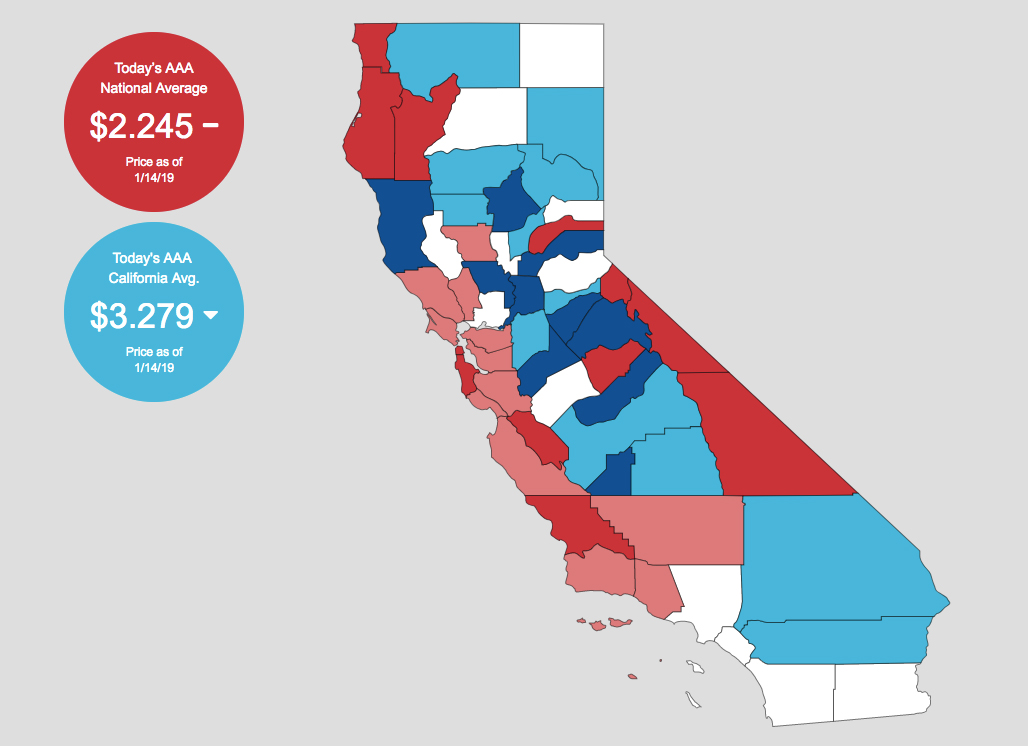 A gallon of gasoline costs $1.03 more in California than the U.S. National average.


California's average price for gasoline has fallen nearly 15 cents in a month, but Californians are currently paying the highest fuel prices in the U.S.

January 15, 2019 - WALNUT CREEK, Calif. -  Californians are paying the highest pump prices in the United States to start the year — a penny more expensive than Hawaii, which typically has the most expensive gasoline in the country.

Despite owning the unfortunate title of Most Expensive Gas, prices in the Golden State have dropped considerably over the last two months. The average price of gasoline in California was $3.27 as of late Monday, 13 cents cheaper than last month, and nearly 50 cents cheaper than the beginning of November.

"Californians are paying more for gasoline than anywhere else in America, including Hawaii. That can be frustrating for motorists, especially those with longer commutes," said Michael Blasky, a spokesman for AAA Northern California. "But gas prices are much cheaper than 60 days ago, when many Bay Area stations flirted with $4 gasoline."

Gas prices have been steadily falling across the country since November, when the global price of oil suddenly took a dive. Wall Street investors had driven the price of oil higher by betting that renewed U.S. sanctions against Iran, a top oil producer in the world, would cause oil demand to rise. But demand for oil and gas has actually fallen in the last two months, with some analysts on Monday predicting an economic slowdown based on forecasts coming from countries like China.

"If global demand for oil falls in the future, that would likely bring gasoline prices down even further. But right now, demand for energy remains very strong across the world," Blasky said. 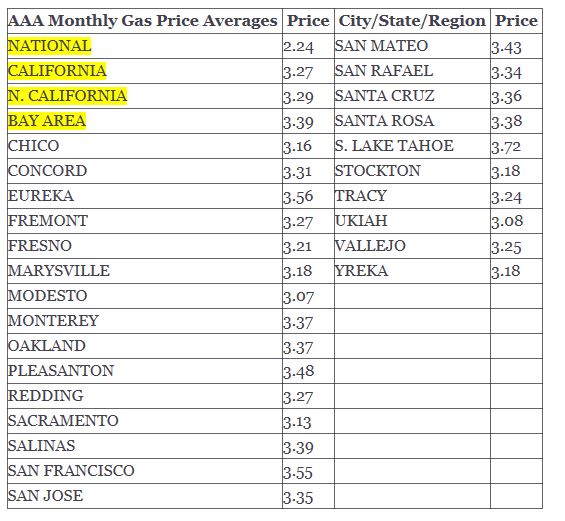 AAA’s Fuel Gauge Report is the most comprehensive retail gasoline survey available, with over 100,000 self-serve stations surveyed every day, nationwide. Data is provided in cooperation with OPIS Energy Group and Wright Express, LLC.

AAA Northern California
We have a proud, 117 history of serving over 4 million Californians. We are more than our legendary fleet of tow trucks, auto, home, life insurance and travel services. Our mission is to make a positive impact in the communities we serve, offering smarter solutions that improve traffic safety and helping the public adapt to a fast-changing mobility landscape. Learn more at AAA.com.
Source: AAA Northern California