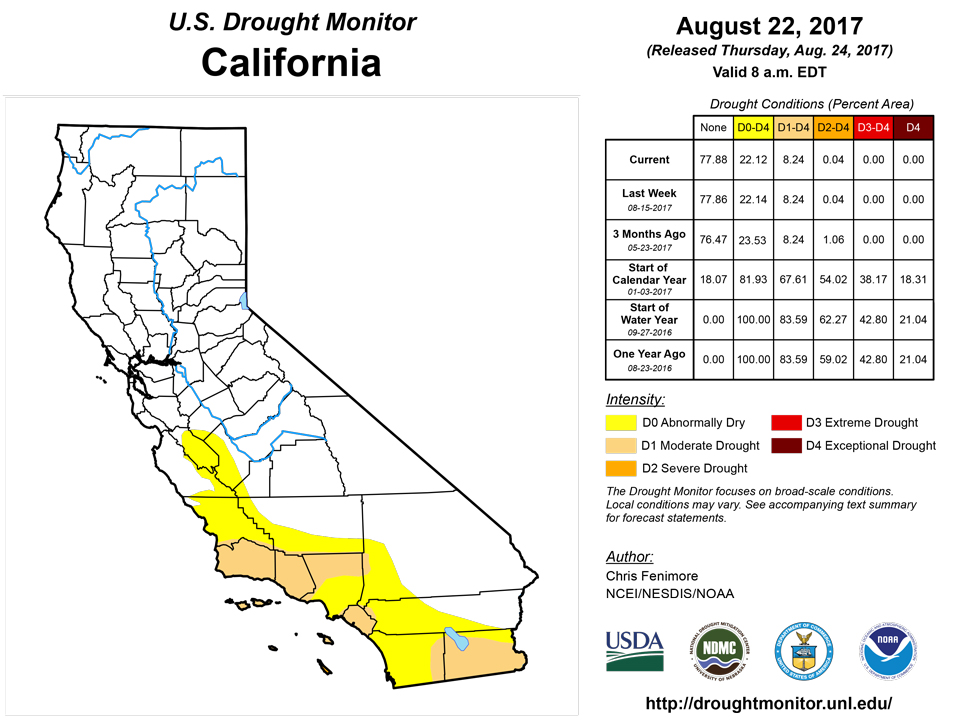 August 24, 20117 - Precipitation was above normal across much of the nation’s mid-section and below normal in portions of the Deep South, Southeast, Ohio Valley and much of the West. The heaviest rainfall was in southern Minnesota, western Iowa, eastern Nebraska, western Missouri, eastern Kansas and northwest Arkansas. Temperatures were above normal for much of the eastern third of the nation, the Deep South and Far West. The Northern Plains, Southwest and much of the West had below-normal temperatures. Drought and dryness persisted in the northern Plains and expanded westward significantly in Montana.

Precipitation was generally mixed across the region this week. Most of Massachusetts, Rhode Island and Delaware were drier than normal for the 7-day period with totals as low as 50 percent of average. A wide swath of below normal precipitation also occurred from northwest Pennsylvania, through Upstate New York, Vermont, New Hampshire and into much of Maine. Earlier this month, it was reported by the Maine Potato Board that the potato yield from this year’s crop will be lower than normal, due to the below normal precipitation. In Massachusetts, it was reported that local streams are drying up and grass that is exposed to direct sunlight is browning. Water restrictions are in place in Plymouth County. Temperatures were below normal for Maine southward into New Hampshire and Vermont and were slightly above normal for the rest of the region. There were no changes to the drought depiction this week in the Northeast.

Below normal precipitation dominated much of the region during this USDM week. Both Georgia and South Carolina recorded the largest deficits. Precipitation totals were near zero in much of those two states. However, some coastal areas there received generally an inch of rain. The dryness also stretched into eastern Alabama. Further north, precipitation was also below normal in North Carolina, and western Virginia. Above normal precipitation fell in northern Florida, eastern Virginia and parts of southern Alabama. Temperatures were above normal across the entire region with anomalies peaking at 4-6 degrees F above normal in the Carolinas. Impacts due to the recent dryness across central North Carolina include the early loss of leaves and drying lawns. For the region, the only change to the drought depiction was in upstate South Carolina where D0 was introduced.

The precipitation pattern across the South was mixed. Below normal amounts occurred in southeastern and northwestern Texas, northern Louisiana, southern Arkansas and parts of western Oklahoma. Elsewhere precipitation was above normal with the largest positive anomalies falling in eastern Oklahoma, northern Arkansas and parts of eastern and southwestern Texas. During the last 30-days, precipitation amounts have been as high as 15-20 inches in eastern Oklahoma and southern Mississippi. However, abnormally dry conditions exist for areas in eastern Texas where burn bans are in place for Colorado, Brazos, and Madison counties. Drought contracted in Oklahoma and northern Texas, while some D0 and D1 expanded in southern Texas.

Heavy rains fell during the week throughout much of the western part of the region. Precipitation amounts ranging from 8-12 inches were recorded in western Missouri, western Iowa, and southwest Minnesota. High totals were also measured in northern Missouri stretching east into central Indiana. The precipitation put a large dent in the long term dryness in Iowa where drought was greatly reduced across much of the state. Elsewhere, persistent dryness is impacting lawns in parts of Illinois. It was reported that the grasses are dormant and tree leaves are starting to turn brown and dropping. A recent field survey indicated that corn yields in Champaign County are 15-20 percent lower than last year. Across the entire state of Illinois, corn was rated 4 percent very poor and 10 percent poor. Soybeans were rated 3 percent very poor and 9 percent poor. In central Illinois, streamflows are reporting below-normal conditions for this time of year. In Illinois, D0 was expanded and D1 was introduced across the central part of the state.

Precipitation was above normal for much of the Dakotas and Nebraska during the week. Rainfall totals exceeded 5 inches in eastern Nebraska and the eastern Dakotas received 3-5 inches. The precipitation helped ease some of the drought conditions that have persisted in the region for several months. Despite the recent rains, significant long-term dryness still existed so drought conditions continued for much of the region. In North Dakota, it was reported that some ranchers are resorting to drilling new wells as the previously established wells have dried up. In South Dakota, reported impacts include: dry dams or unusable water, lack of well water, failed hay crops, and wildfire danger. In Nebraska, it was reported that crops are beginning to stress due to the lack of rain.

Most of the West region received little to no precipitation for this period, as this time of year is normally the dry season. Temperatures were cooler than average for much of the Southwest and interior West, but 2-4 degrees F above normal for much of Nevada, as much as 2 degrees F above normal for central California and 6-8 degrees F above normal for northern California. Drought continued to expand in western Montana where the extremely dry weather pattern has persisted. It was reported that 98 percent of the topsoil moisture in Montana was rated very short to short and 90 percent of subsoil moisture was rated very short to short. The USDA reported 67 percent of the state’s pasture and rangeland was in poor to very poor condition. It was also noted that livestock sales have been accelerated 3 to 4 weeks ahead of normal due to the extreme lack of moisture. Wildfires have resulted in poor air quality. The Lolo Peak fire has scorched 32,000 acres thus far.

In Hawaii, the lack of precipitation during the past month has resulted in drought coverage over much of the islands. On Kauai, it was reported that low elevation pastures from Kealia on the east side clockwise around the island to Hanapepe are very dry. Similar to Kauai, west Oahu has been very dry with deteriorating pastures and vegetation. On the Big Island, conditions continue to worsen over the southern portion. It was reported that several ranchers operating along the lower elevations of the Kau District from Punaluu to South Point had pastures in very poor condition. The 45-day rainfall total from that area was close to 10 percent of average.

There were no changes to the drought depiction in Alaska or Puerto Rico this week.

Looking at the next 7 days, Tropical System Harvey is forecasted to make landfall in southeast Texas Friday morning bringing with it several days of heavy rainfall in eastern Texas, Louisiana, and the lower Mississippi Valley Friday through early next week. Precipitation totals may approach 1 foot in some locations. Elsewhere, precipitation totals may total 1-2 inches in the northern High Plains stretching southwestward into the Texas Panhandle and New Mexico. Another tropical disturbance is forecasted to bring precipitation to southern Florida and depending on its development and track, along the Southeastern coastline. An active weather is expected in the Southwest as weak disturbances move over New Mexico. Temperatures will remain below normal for much of the eastern half of the country while the western half will be above normal. The coolest anomalies will be in the South and Southeast.

Looking ahead 8-14 days, the Climate Prediction Center’s outlook calls for the greatest probability of above normal temperatures in the Northwest while the South and Southeast have the best odds of being cooler than normal. Odds are in favor of precipitation falling in the Southwest and East while the Midwest and Northwest remain dry.