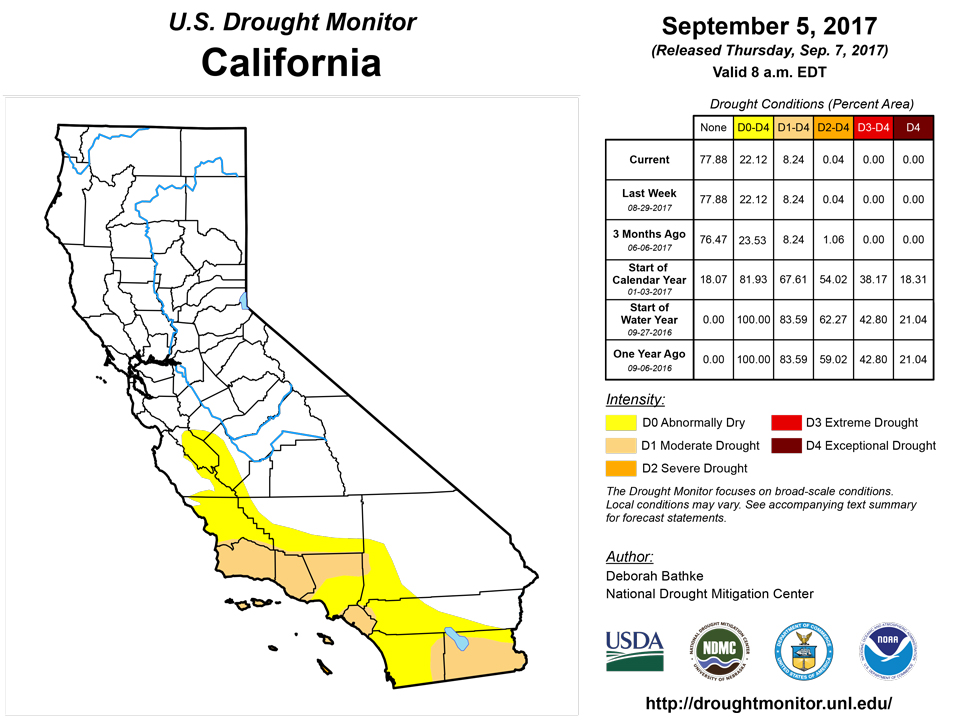 September 7, 2017 - This past week saw too much rainfall and historic flooding along the Gulf Coast as a result of Hurricane Harvey. After dumping record-breaking rainfall on the Texas coast, the remnants of Harvey tracked to the northeast, bringing excess rainfall from the Lower Mississippi Valley to the Mid-Atlantic states. Despite this, pockets of abnormal dryness continue to develop in the Southeast in areas that missed the bands of heavy rains. With Hurricane Irma approaching the United States, there is a potential for heavy rainfall to alleviate these conditions

While many eyes were on the devastation in Texas, drought continued to intensify in the Pacific Northwest. Record-breaking heat and dry streaks have parched vegetation and fueled devastating wildfires across the region. Smoke from these fires traveled along the jet stream and stretched to the East Coast.

The Northeast ended the U.S. Drought Monitor week with a mix of above- and below-normal rainfall. Temperatures continued to fall below normal, keeping evapotranspiration rates low and preventing any deterioration of drought conditions. The only change made to this week’s drought map in the region was removal of the abnormally dry depiction on Nantucket Island as rainfall levels are showing surpluses at multiple time scales.

While eastern Texas broke rainfall records, southwest Texas continued to see rainfall deficits and drying soils, resulting in minor drought expansions and the introduction of severe drought over Hidalgo County. Pockets of dryness also persisted in Oklahoma, leading to the expansion of abnormally dry conditions and the introduction of moderate drought in the Panhandle.

Dryness continued across a swath of the central Midwest, leaving locations in Iowa with deficits of about 4 to 10 inches over the last 90 days. Streamflow and soil moisture continue to fall well below normal and satellite vegetation indicators depict the stress on vegetation. Accordingly, Iowa saw small expansions in moderate and severe drought in the south, abnormally dry conditions in the east-central region, and abnormally dry conditions and moderate drought in the northeast. Meanwhile, locally heavy rainfall brought minor improvements to the abnormally dry depiction on Michigan’s Lower Peninsula.

Above-normal temperatures continued across the Dakotas and the Nebraska Panhandle this past week. A band of rain moved through the region during the week, though amounts were generally less than one inch. North-central North Dakota saw increases in severe drought where rainfall was less than 25 percent of normal over the last 30 to 60 days and satellite based-vegetation indicators were showing stress. South-central North Dakota saw a one-category improvement in areas where rainfall deficits, soil moisture, and well levels have begun to show recovery and pastures have responded to rains over the last 30 days. Western South Dakota saw a small one-category deterioration due to a continued lack of rainfall, low soil moisture and streamflow values, and vegetation stress. Southeastern South Dakota and northeastern Nebraska saw one-category improvements in areas where precipitation deficits, soil moisture, and vegetation indicators have returned to normal or near-normal values. Improvements also occurred in the abnormally dry area in the Nebraska Panhandle and in the moderate drought in central Kansas.

Hot, dry weather continued across much of the Northwest, causing conditions to deteriorate a conditions in many locations as rainfall deficits increased and hot temperatures dried out vegetation. Many locations in the region have experienced a record-breaking 80-plus days without rain over the last three months. The dry conditions have fueled wildfires across the region, prompting public health warnings because of decreases in air quality. Changes to this week’s map include an expansion of severe and extreme drought in central Montana and the introduction of severe drought in eastern Washington and western Washington and Oregon. Conditions also deteriorated in southern Idaho and the Upper Colorado River Basin as rainfall deficits grew and streamflow fell below normal. Southern Idaho, Wyoming, Utah, and western Colorado saw expansions in abnormally dry conditions while eastern Utah and northwest Colorado also saw an expansion of severe drought.

In Alaska, the abnormally dry depiction was removed from Kodiak Island and the Kenai Peninsula where rainfall has been 5 to 7 inches above normal over the last month and stream flows have begun to recover. In Puerto Rico, a one-category improvement was made in response to near-normal rainfall and improved stream flow values. In Hawaii, drought conditions persisted and no changes were made to the map.

Since the Tuesday morning cut-off for this week’s map, 1 to 3 inches of rain has fallen in two swaths, one in eastern North and South Carolina and the other stretching along a cold front from the Mid-South to New England. The front will continue to bring rain and cooler temperatures, 5-15 degrees below normal, to the East Coast. The East will likely see even more rainfall from Irma, a large and powerful hurricane that is expected to make landfall in the Southeast this weekend. Heavy rains of 1 to 10 inches, with isolated higher amounts, are forecast for parts of the Florida Peninsula, Georgia, and South Carolina with the locations of heaviest rainfall depending on Irma’s eventual track.

The National Weather Service’s Weather Prediction Center forecasts warm and dry conditions are expected from the Northern Plains into the Northern Rockies where temperatures may be 5 to 20 degrees above normal. Forecast thunderstorms are also expected to bring much needed rainfall to southeastern Oregon with amounts of 1 to 1.5 inches. Rainfall from 0.5 to locally over 1 inch is also forecast for northern New Mexico, southwest Colorado, and northern Utah, and in southern Nevada, northwest Arizona, and southeast California through early next week.