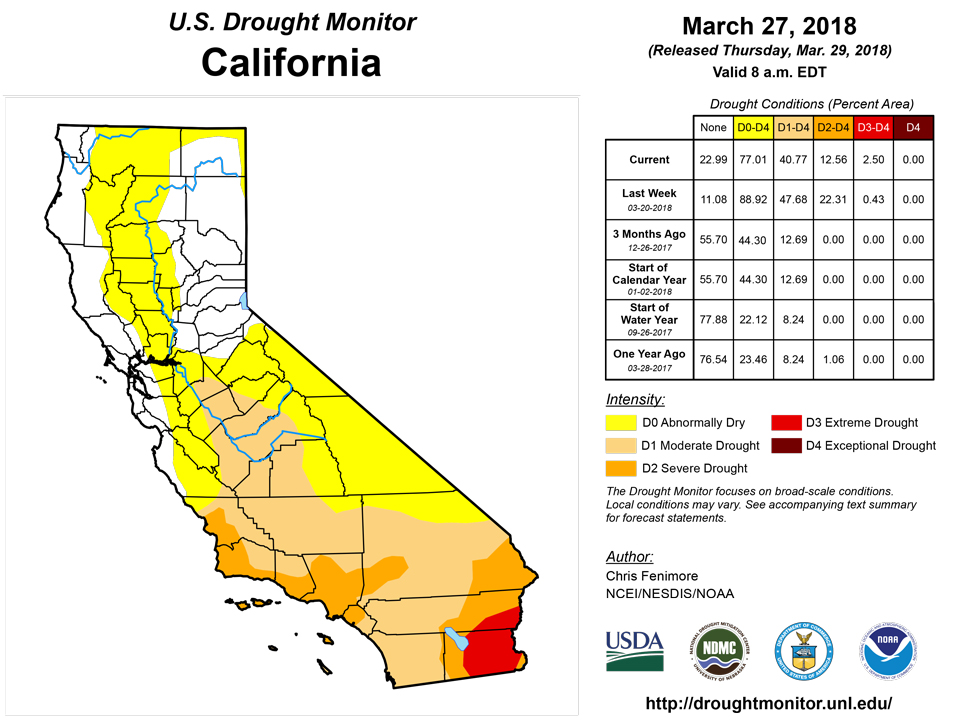 The Northeast endured another nor’easter this week – its fourth in as many weeks. Based on preliminary reports, as much as 20 inches of snow fell in parts of the region. Dryness was confined to the inland areas of Maine, New Hampshire, New York and Vermont where 30-day precipitation deficits are 1-2 inch below normal in places. Recent precipitation allowed D0 to be contracted in northern Maryland and D1 to be contracted around Washington D.C.

Precipitation was above normal (1-2 inch surplus) across much of Virginia and North Carolina during the USDM period. Precipitation was near to slightly above normal for western Virginia, much of North Carolina and northern Alabama during the past 30 days. Elsewhere in the region, 30-day precipitation deficits of 1-3 inches are widespread. Long-term deficits in the region remain steady; however, short-term deficits have increased due to the recent lack of precipitation. Streamflows have also decreased at many sites. Despite the recent dryness, the drought depiction this week remained mostly unchanged. There was an expansion of D0 in southwest Georgia and the D0 in northwest Alabama was extended eastward. In Florida, recent dryness has continued, prompting the expansion of D0 in the central part of the state where the 180-day precipitation deficits are 7-10 inches. The Keetch-Byram Drought Index, an index used to determining forest fire potential, continues to worsen. The values are especially high in the Miami-Dade county area.

Precipitation was generally above normal (0.5-2.0 inch surpluses) across north central Texas, eastern Oklahoma and extreme northwestern Arkansas during the USDM period. During the last 30 days, much of Texas, Oklahoma and Louisiana were running 1-3 inches below normal while Arkansas was as much as 5 inches above normal. According to the USDA, 65 percent of wheat in Texas was in poor to very poor condition while 72 percent of topsoil moisture across the state was short to very short. Moderate and Extreme drought was expanded in central and parts of southern Texas. Precipitation continues to miss western Oklahoma where 28-day streamflows are running below the fifth percentile and precipitation for the last 6-months is around 20 percent of normal. Extreme drought was expanded to cover more of the Panhandle of Oklahoma, reaching into Kansas and Texas. Drought and dryness is not currently affecting the majority of the other states of the region.

Precipitation was generally above normal across the region during the USDM week. Totals were in the 2-4 inch range for much of southern Indiana where 2 separate systems, one early and another later in the week, converged. Precipitation during the last 30 days was above normal (2-5 inches) for parts of Indiana and Missouri. Abnormally dry conditions continued for much of Wisconsin and the Upper Peninsula of Michigan where D0 was expanded. D0 was contracted in central Missouri due to the recent precipitation.

Precipitation was light across the region during the USDM period as, generally speaking, less than 1 inch of precipitation fell. Aside from Kansas and Colorado, precipitation during the past 30-days was just ahead of normal as surpluses of 0.50 to 1 inch fell in much of North Dakota, eastern South Dakota and eastern Nebraska. Winter wheat conditions were rated 49 percent poor to very poor in Kansas while 69 percent of topsoil moisture across the state was short to very short. In southern Kansas, 180-day precipitation departures are 4-8 inches below normal. In southwestern South Dakota, recent precipitation allowed for D0 and D1 to be contracted. Severe drought (D2) was contracted in west central Colorado and in the Dakotas. Extreme drought (D3) was expanded southern and western Colorado and southern Kansas.

Copious amounts of precipitation fell in the West during the USDM period, helping to restore the below-normal seasonal mountain snowpack in the Sierra. In the lower elevations, the atmospheric river event caused flash flooding and mudslides in the same area where forest fires last December charred the landscape. Little to no precipitation fell during the week in Arizona and New Mexico. Despite the recent precipitation in California, departures are evident beyond 30 days. At the 6-month time scale, precipitation amounts are 30-50 percent of normal in Southern California. However, for the same period (6-month), the recent storm brought the precipitation totals closer to normal in the central and northern Sierra. River basin snow water content now measures 75-90 percent of average in the central Sierra. The recent storm allowed the contraction of drought across much of the West this USDM period. However, where the precipitation did not fall (Desert Southwest and northwestern New Mexico), Severe and Extreme drought (D2-D3) was expanded.

*For details on Eastern Colorado and Eastern Wyoming, refer to the High Plains region.

No changes were made in Alaska this USDM period. Drought or abnormally dry conditions do not exist for Hawaii or Puerto Rico this week.

During the next 5 days, precipitation amounts are forecast to be high (3-5 inches) in an area stretching from Louisiana, Arkansas, Alabama, western Tennessee and into Kentucky. Elsewhere, lighter precipitation is forecasted to fall in the northern and central Rockies, High Plains, and Northeast. The drought-stricken Four Corners region, western Texas and the Southwest are expected to continue to be dry.