Law enforcement personnel escorted residents of Foresta to their homes this afternoon. The community will be open to the general public tomorrow, Saturday, August 2, at 10:00 a.m. More up-to-date information on the fire will be available in this evening's 8:00 update.

Fire Summary: Today crews made excellent progress with burnout operations on the north end of the fire. Weather conditions were in their favor, and they completed a black line around the fire’s edge. They are working to mop up and strengthen the line. A spot fire, approximately 100’ x 100’, was quickly contained in the northeast corner. Logs and other large fuels burning in the interior are producing visible smoke, but they pose no threat to the containment line.Two helicopters were released from the El Portal Fire to assist at the neighboring French Fire this afternoon. Over the next few days many crews will be released from the El Portal suppression effort and potentially reassigned to other fires throughout the West.The National Park Service escorted a convoy of residents into Foresta this afternoon; this was the first time in nearly a week that they were allowed to enter their homes. Power was restored by the Pacific Gas and Electric Company at approximately 4:00 P.M. today.

Smoke issues on the El Portal Fire:Smoke sensitive individuals such as elders, children, pregnant women, and people with heart or lung disease are vulnerable to the adverse health effects of smoke. Please avoid prolonged or strenuous outdoor activity. You may consider leaving the area until smoke levels decline. Please consult your healthcare provider to discuss protective measures. For more information, visit one of the following websites:

For health effects of smoke: www.mariposacounty.org/index.aspx?NID=89

The Foresta community will be open to the general public tomorrow, Saturday, August 2, at 10:00 a.m.

This map shows fire activity near CRANE FLAT in Yosemite National Park. The green line is the park boundary. The purple area is the fire perimeter as of July 31 2014 at about 2200 hours PDT. The most recent fire activity signatures are from the Terra satellite at 1156 AM PDT (indicated by the bright red footprint).
The map shows the location of the Giant Sequoia groves and the Crane Flat campground. (note by Joe Coho)

Thanks to Joe Coho for the Map. 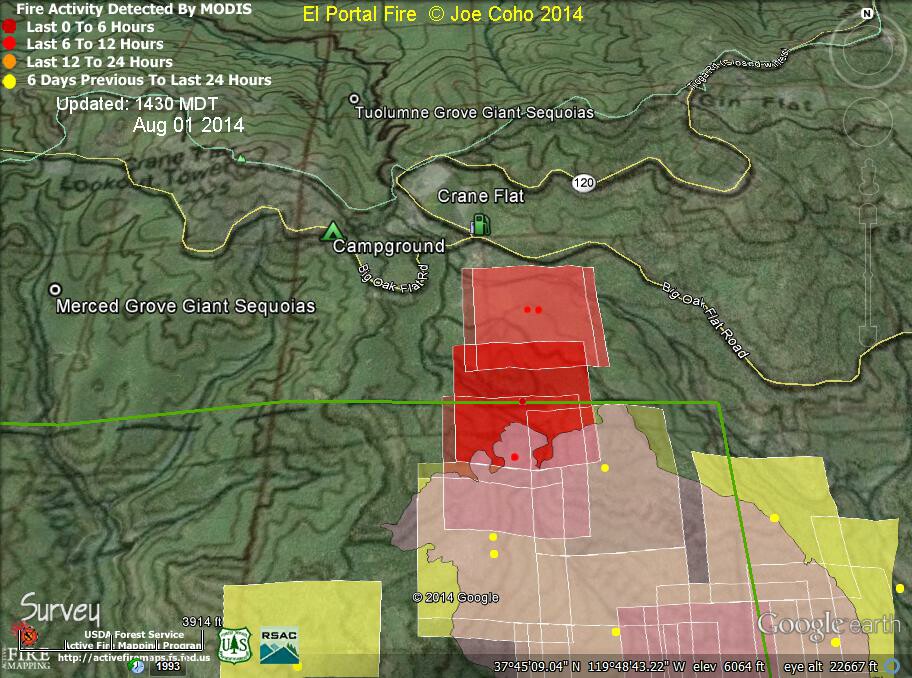 These two maps show recent fire activity detections as of 235 AM Friday Aug 1 2014 by the Aqua satellite. These are the red areas on the map.
The second map is a close up of the first centered on the Crane Flat area. It shows the Crane Flat campground and gas station. Nearby is the Merced Grove of Giant Sequoias.
(note by Joe Coho)

Thanks to Joe Coho for the maps. 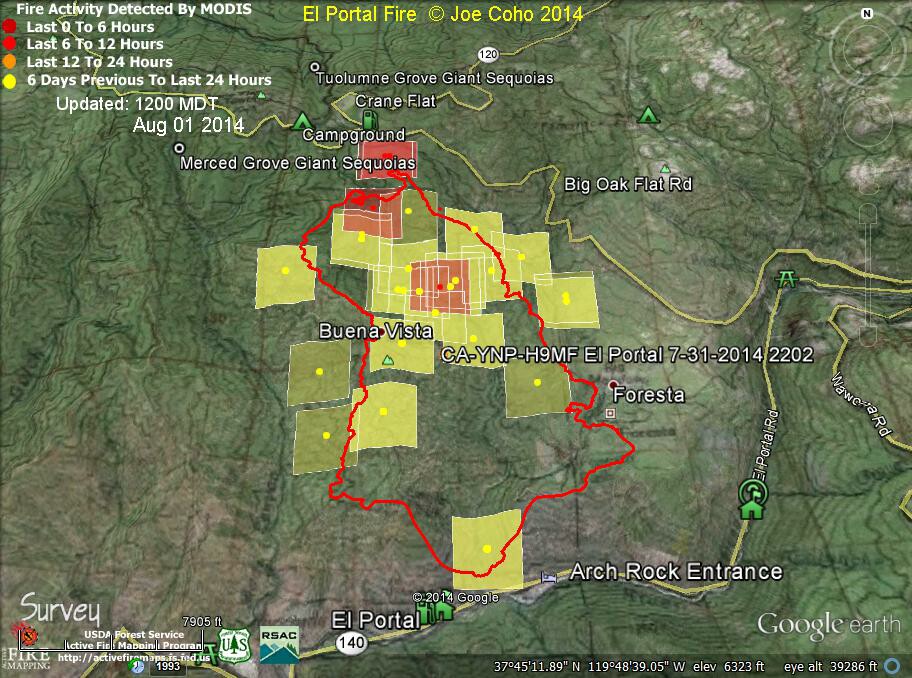 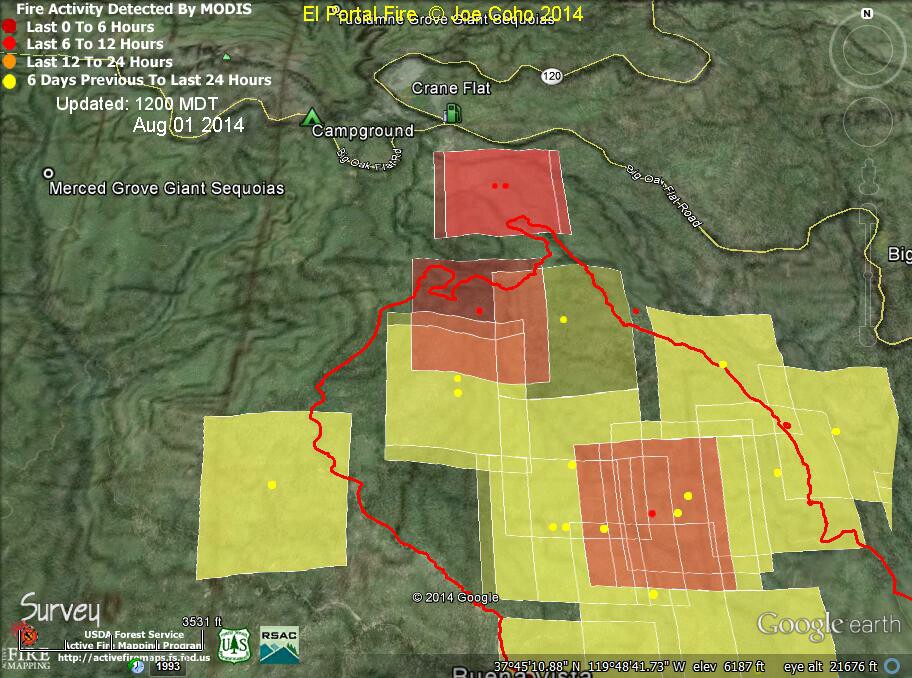 An Unofficial Report has 4,518 acres.

The evacuation order will be lifted for the community of Foresta on Friday, August 1 at 3:00 p.m., after which time the residents are allowed to return to their homes. 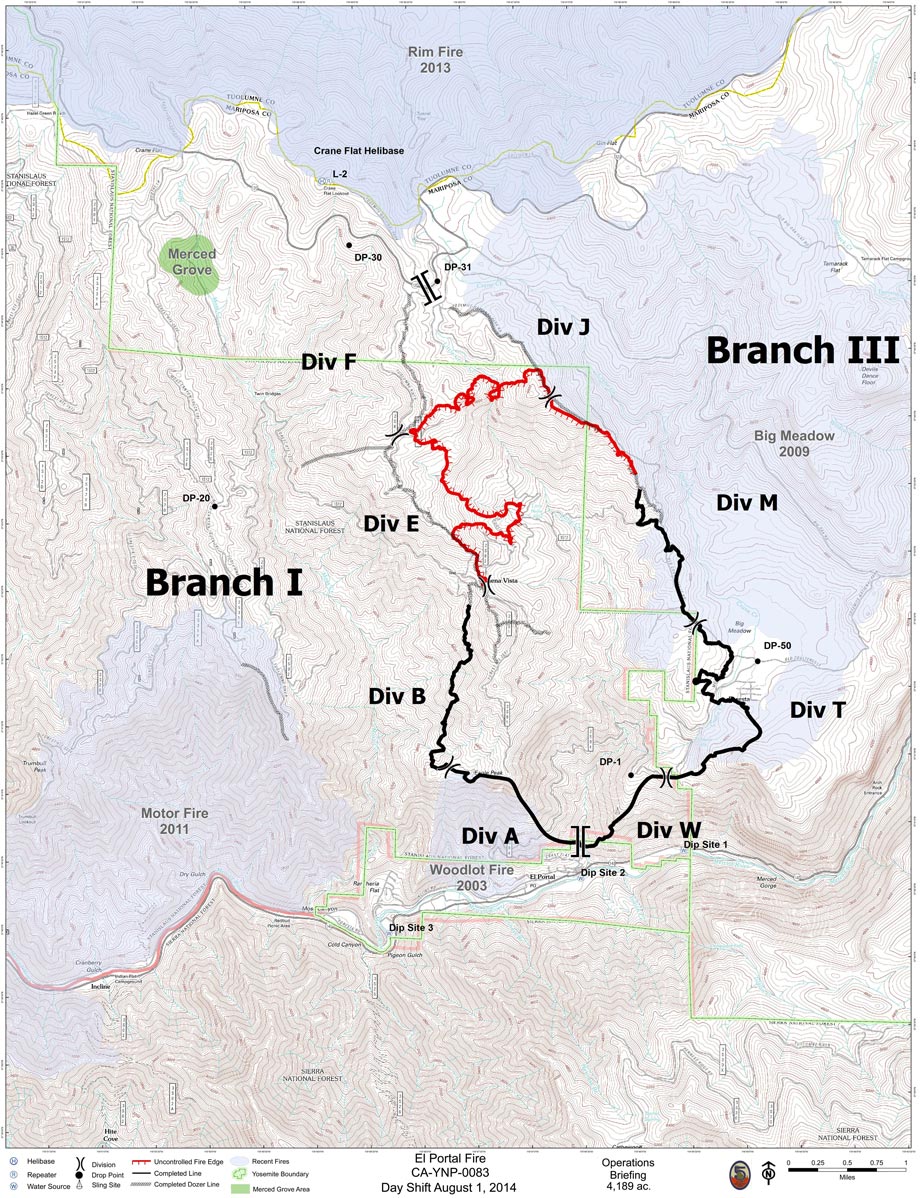 Two satellites, Terra and Aqua, contain MODIS instruments which provide data which can be interpreted regarding fire activity.

NASA says: "MODIS (or Moderate Resolution Imaging Spectroradiometer) is a key instrument aboard the Terra (EOS AM) and Aqua (EOS PM) satellites. Terra's orbit around the Earth is timed so that it passes from north to south across the equator in the morning, while Aqua passes south to north over the equator in the afternoon."

In these maps, the square footprints indicate the accuracy of the center dots. The colors shade from red to orange to yellow as the time from detection increases.

What you need to know: The red dots and footprints are the most recent activity. They indicate possible fire activity based on certain characteristics of the multispectral image. Even though they are carefully interpreted, they don't guarantee an actual fire on the ground. (note by Joe Coho)

Thanks to Joe Coho for the map. 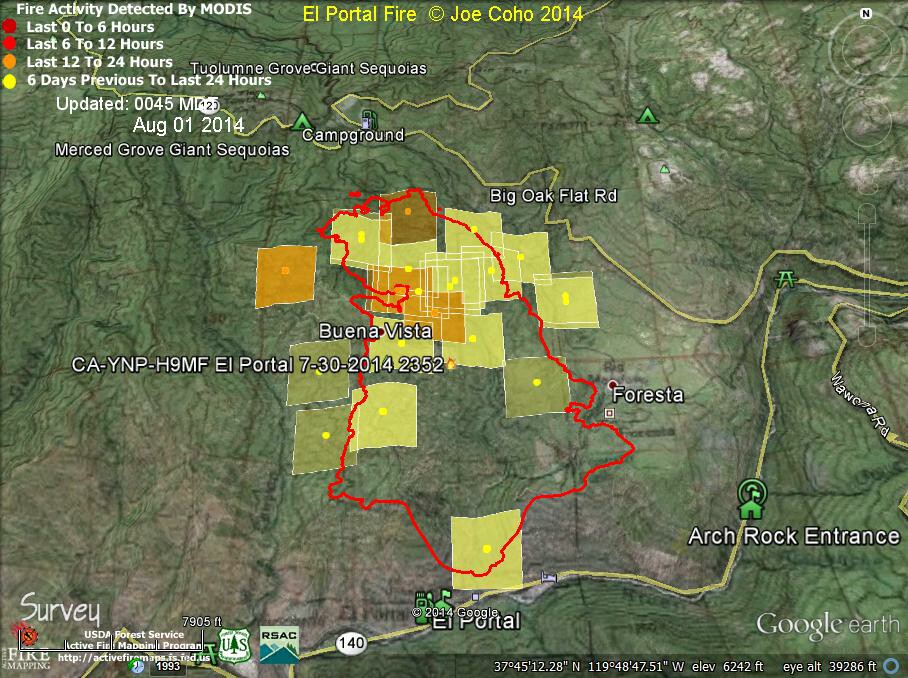 This fire growth happened in part because smoke kept the large helicopters from being able to fly. In addition, severe fire weather aided the growth of the fire.

We can see that the fire moved both North and Northwest during this period. Along the Southern flank it seems to be held by completed fire lines. (note by Joe Coho)

Thanks to Joe Coho for the map. 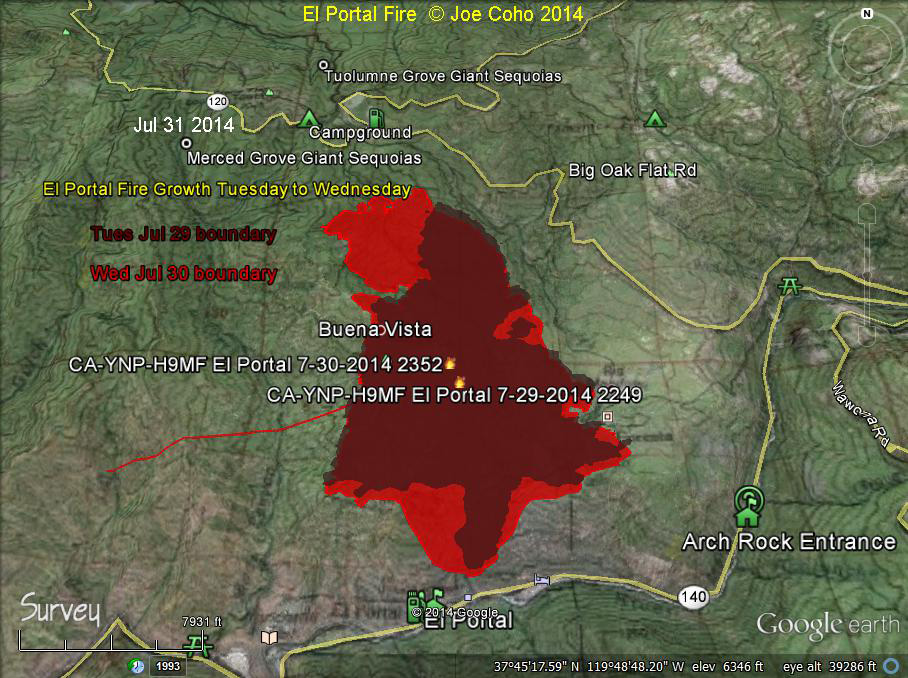