January 30, 2019 - By Christine Souza - Storms during the first three weeks of January brought seasonal rainfall and snowpack levels to average or more, increased reservoir levels and brought cautious optimism to California farmers, who hope to see improved water supplies in the coming year. 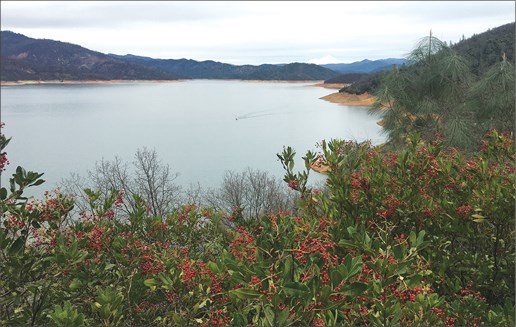 "We've received fair precipitation up until now, so we're hopeful it continues for another two months," said Bill Diedrich, who chairs the board of the Los Banos-based San Luis Water District.

Diedrich farms in Fresno and Madera counties, growing nut crops, pomegranates and processing tomatoes, and said he faces varying degrees of water supply certainty, depending on where his fields are located. The San Luis district and other Central Valley Project contractors south of the Sacramento-San Joaquin Delta ultimately received a 50 percent supply from the CVP last year, and Diedrich said he hopes for something similar in 2019.

"We know that the allocation is likely not going to be dire or drastic such as 0 to 10 percent, but I think most people are feeling pretty confident that there's going to be an allocation somewhere between 40 and 45 percent," he said. "It could go even higher, but there are supplemental arrangements that we have made in the district to where we are going to be fine."

Dan Errotabere, who farms permanent and row crops in Riverdale in the Westlands Water District, said the recent accrual of snowpack and precipitation have taken some pressure off. But, he said, many unknowns remain going into the year, including how requirements for fishery flows and other environmental requirements could affect CVP operations.

"You look at the weather and hope it continues to be favorable in terms of a normal or better-than-normal year," Errotabere said, "but there are so many other components that enter into this decision-making process that lost opportunities can happen very quickly. Any time you have uncertainty, there is no confidence with our processors on how much can you plant."

The U.S. Bureau of Reclamation is expected to issue an initial 2019 allocation for CVP contractors in mid-February. In the meantime, the California Department of Water Resources reports that federal reservoirs such as Shasta—the state's largest reservoir—contain close to average supplies at this point in the season. DWR spokesman Chris Orrock said Shasta Lake stood at 95 percent of the historical average for the date.

Lake Oroville, the principal State Water Project reservoir, was at 60 percent of average storage, having been kept to a low elevation during construction. San Luis Reservoir, a joint federal-state project, was at 109 percent of its historical average, Orrock said.

For SWP contractors, DWR announced last week it had increased 2019 allocations to 15 percent, up from the initial 10 percent, and said the figure would be further revised as conditions change. The final SWP allocation for 2018 reached 35 percent.

Orrock said Southern California has received good precipitation so far this year—a contrast to recent dry years—with reservoirs at or above historical averages.

"Lake Cachuma is actually overflowing its spillway down into the Santa Ynez River for the first time in years," he said.

Despite the improvement, Santa Barbara County avocado and lemon farmer Sam Frye said the region remains "basically into our eighth drought year, and we are not out of it yet."

Frye farms in the Montecito Water District, which relies on Lake Cachuma for a portion of its water supply.

"As long as we have enough supply and the powers that be are willing to pay the price, we're going to continue to farm as we have," Frye said. "We're just trying to maintain the orchards that we have. We don't have groundwater, so we buy everything that we use from the water district. The water is there, but the cost is prohibitive."

Due to the drought, farmers in the region faced severe rationing of water and high penalties for exceeding those rations. Many had to pay a drought surcharge, which doubled the cost for water.

"This little corner of the state has been kind of the hole in the donut for a long time," said avocado grower Ken Doty of Goleta. "We are getting some decent rainfall and I am absolutely grateful. However, our drought status has been reduced one stage, so by no means are we out yet."

"Every time we have surface water supply it benefits groundwater recharge, because you are not running the pumps. That is the best way to put water in the ground," he said.

"Our biggest concern is how the GSA is going to shake out in Madera County," Diedrich said. "We farm in Madera Irrigation District, which is a GSA, but we also farm some in the 'white area,' or out-of-district area, so that's the county GSA and a whole different story. We are trying to get all of the engineering done so that we can have a (groundwater sustainability plan) available for review, so it can be approved in 2020. As water issues go, that is where we—me and my sons as farmers—have the greatest exposure."