November 25, 2019 - By Tim Stephens - The threespine stickleback, a small fish found throughout the coastal areas of the Northern Hemisphere, is famously variable in appearance from one location to 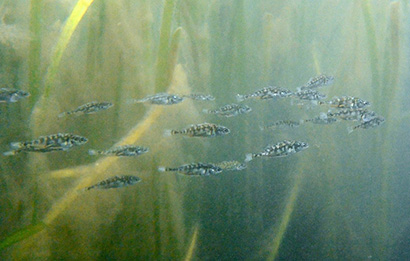 another, making it an ideal subject for studying how species adapt to different environments. A new study shows that stickleback populations in estuaries along the coast of California have evolved over the past 40 years as climate change has altered their coastal habitats.

(Left) The threespine stickleback is found throughout the coastal areas of the Northern Hemisphere. (Photo courtesy of E. Palkovacs)

The study, published November 21 in Global Change Biology, looked at variation in the armoring that protects the stickleback from predators, specifically the number of bony plates along their sides (called lateral plates). Previous research showed that populations in northern California have a more complete set of this armoring than populations in southern California, corresponding to differences in their habitats.

"There's a gradient from drier systems in the south, where the estuaries are more pond-like, with more vegetation, to increasingly more open, river-like systems as you go north," explained coauthor Eric Palkovacs, associate professor of ecology and evolutionary biology at UC Santa Cruz.

The new study found that threespine stickleback in some California estuaries are evolving to have fewer lateral plates as their habitats become more pond-like due to a warmer, drier climate. Stickleback populations at some central California sites are now looking more like the low-plated populations typical of southern California.

"The lateral plates provide armoring, but the downside is it costs energy to build them and they can limit maneuverability," Palkovacs said. The vegetation and other structural features found in slow-moving water are thought to increase the need for maneuverability and decrease the need for armoring because the stickleback have more places to escape or hide from predators.

Palkovacs and first author Simone Des Roches, who led the study as a postdoctoral researcher in his lab at UC Santa Cruz, took advantage of an opportunity to study historical specimens of threespine stickleback from surveys conducted along the California coast by coauthor Michael Bell in the 1970s. Bell, who has spent most of his career studying sticklebacks, recently retired from Stony Brook University in New York and is now affiliated with the Museum of Paleontology at UC Berkeley.

"It's a real treat for me toward the end of my career to have collaborators who are able to get added value out of these collections," Bell said.

Previous research had already established the genetic basis of the differences seen in the lateral plates of threespine stickleback, and genetic testing of the fish Des Roches collected confirmed this.

"We know the genetics underpinning this trait and how it correlates with the environment, so we have these well established relationships of the genes to the morphological traits and the traits to the environment. That allows us to infer that what we're seeing is evolutionary change," said Des Roches, who is now at the University of Washington.

She added that, although this study focused on the lateral plates, other traits are probably also evolving in response to climate-driven changes in the habitat. For example, the fish Des Roches collected in the Big Sur River in 2017 not only have fewer lateral plates than the ones Bell collected in 1974, their overall morphology is also strikingly different.

"Their head shape and mouth shape are completely different, which is consistent with eating different prey. We didn't look at those traits in this study, but I have an idea of what you might find if you did," Des Roches said.

Bell said it's not surprising that stickleback populations in California are evolving in response to climate change, because his previous research had shown how rapidly this species can evolve. He has done extensive research in Alaska looking at what happens when sea-run stickleback colonize freshwater lakes.

"In Alaska, stickleback go from the morphology of sea-run fish to that of freshwater fish in less than ten generations. The difference is that these populations in California are staying in the same place and the environment is changing around them, causing them to evolve," Bell said.

The evidence that climate change is altering the genetic composition of natural populations is significant, he said. Other studies have found morphological changes in plants or animals associated with climate change, but very few have shown changes in traits for which the underlying genetic basis is well established.

Another important aspect of this study is that the changes in stickleback are occurring in response to a climate-driven transformation of their habitat. "We tend to focus on the direct effects on organisms of increased temperatures or changes in precipitation, but we also have to think about how climate change will impact the characteristics of the habitats those organisms rely on," Palkovacs said.

As more stickleback populations become dominated by fish with few lateral plates, the gene variant (or allele) for the completely-plated morphology could disappear from those populations, Des Roches said. This loss of genetic diversity could limit the adaptability of those populations in the future if, for example, a new predator were introduced into their environment.

"They might lack the genetic variation required to adapt, making them more vulnerable to extinction," Des Roches said.

This work was supported by the UC Institute for the Study of Ecological and Evolutionary Impacts (ISEECI); the NOAA Cooperative Institute for Marine Ecosystems and Climate; and the Norris Center at UC Santa Cruz.
Source: UC Santa Cruz