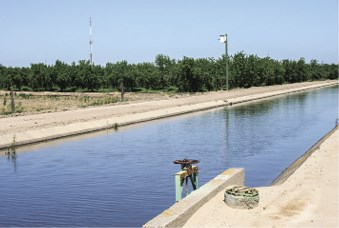 policies related to water supply and water quality, will continue to be priority issues in 2020.

California water policy leaders say balancing the supply of groundwater by implementing the Sustainable Groundwater Management Act, or SGMA, and addressing policies related to water supply and water quality, will continue to be priority issues in 2020.

"In any year, the biggest question of all is always answered by Mother Nature, but fundamental human policy questions are on the horizon for 2020," said California Farm Bureau Federation Senior Counsel Chris Scheuring. "As the first groundwater sustainability plans are revealed, we're going to find out if SGMA is a train wreck or a glidepath to sustainability in many places."

Fresno County farmer Don Cameron, who chairs the State Board of Food and Agriculture, said SGMA implementation begins after the GSPs are submitted in late January. Once GSPs and coordination agreements are submitted, Cameron said, "the GSA will gain substantial power to regulate groundwater."

"This can mean restricting pumping, formation of groundwater trading within GSAs, purchase and importation of available surface water, monitoring of groundwater pumping and maintaining records of water quality and changes in aquifer levels within their areas," Cameron said, noting that each GSA will likely have different approaches that are determined by their local GSA board in conjunction with state regulations. "I think we will see a wide variety of approaches within the different GSAs throughout the state, but we know that we either have to reduce pumping and/or find other water sources to balance our water budget and eliminate overdraft."

After completing the prioritization of 515 groundwater basins in December, DWR said it identified 94 basins that are required to form GSAs and GSPs. The 94 basins account for 98% of the pumping, which is about 20 million-acre-feet and 88% of all irrigated acres.

"DWR's newly released groundwater basin prioritization includes two Southern California basins that went up in priority, so they're going to have to back off on pumping," said Danny Merkley, CFBF director of water resources. "This will be challenging to balance between urban needs and agricultural needs."

Related to surface-water deliveries and the disagreement between the state and federal government over operating rules proposed by federal agencies for the federal Central Valley Project and State Water Project, Scheuring said, "This year, we should learn how federal and state governments reconcile themselves in serving the millions of acres of farmland and tens of millions of Californians that they have committed themselves to deliver water to."

Regarding Newsom's plan for water in the state, Merkley said, those in agriculture are awaiting the release of Newsom's California Water Resilience Portfolio, a framework to guide state administration, agencies and boards on a variety of water issues.

"We're very anxious to see if this administration continues to show a commitment to functional flows and habitat improvements, specifically as part of voluntary agreements that will serve as an alternative to state-mandated 'unimpaired flows' plans being drafted by the State Water Resources Control Board," Merkley said. "Rather than sending a bunch of water down, we're hoping we can work on projects that actually benefit the fishery, such as the addition of gravel in the American River which has led to increased spawning."

Capturing floodwater for recharge, Cameron said, will be an important part of the governor's water plan.

"We have to be more flexible in the state to allow for multi-benefit projects that can capture water during flood periods and store this water underground for periods of drought," Cameron said. "These projects can provide prevention of downstream flooding of our rural communities, while providing benefits for wildlife and rebuild our aquifers."

Merkley added, "It remains to be seen how this administration is going to improve conveyance of water south of the delta without negatively impacting any of our stakeholders delta north."

Expectations for the coming year include a continuation of steps to improve water quality, such as addressing salinity in surface water and salt and nitrates in groundwater. Last October, the state water board set in motion a 35-year program known as Central Valley Salinity Alternatives for Long Term Sustainability, or CV-SALTS, to address nitrate and salt content in Central Valley groundwater. Compliance with the Salt and Nitrate Control Program brings a new layer of requirements that will be folded into the existing Irrigated Lands Regulatory Program.

"As for CV-SALTS, it seems like we have been focused on SGMA so intensely for the past two years that most in the farming community are not that familiar with the implications headed our way," Cameron said. "Unfortunately, growers will need to be prepared for the next round of regulations facing their industry in the coming year."

Federally, CFBF federal policy consultant Erin Huston said the 2015 waters of the U.S., or WOTUS, rule was officially repealed on Dec. 23, and the Trump administration's new WOTUS rule is expected in early 2020.

"Building and maintaining our federal water infrastructure remains a top priority to California's farmers and ranchers," Huston said. "We are encouraged that several standalone bills have been introduced in both chambers and are hopeful that additional legislative proposals as well as WRDA (Water Resources Development Act) reauthorization will include these priorities."

California has the most productive farmland in the world, Cameron said, yet the state's water system is outdated and in need of expansion.

"We know that building aboveground water storage is a very difficult proposition here in California, but we can, however, expand what we already have, increasing capacity of conveyance already in place, build new infrastructure in areas to convey water to areas that are coming up short," Cameron said. "We have outgrown our water-supply system in California and until we have a major change in focus, it will remain difficult to change."