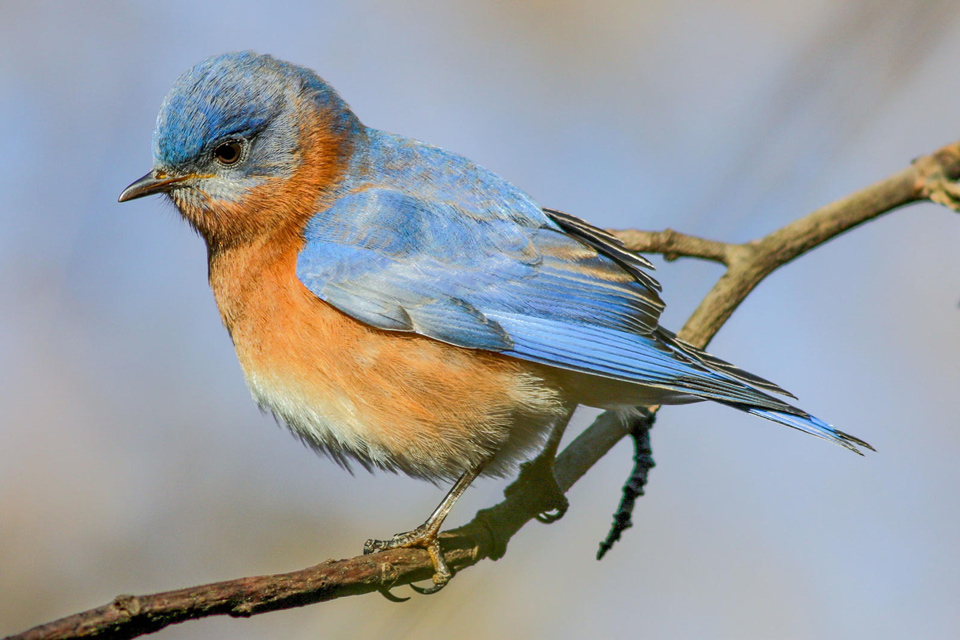 
In the first peer-reviewed study of its kind, participants in Audubon’s Climate Watch program helped determine the ongoing impact of climate change to bluebirds and nuthatches.

April 28, 2020 - NEW YORK - On Monday, the journal Ecological Applications published a final version of a study from National Audubon Society scientists demonstrating that climate change is causing a measurable shift of birds’ ranges during winter and breeding seasons. Years of bird observations gathered by hundreds of volunteer participants in Audubon’s Climate Watch community science program confirm projections made earlier by Audubon that rising temperatures and changing precipitation patterns will likely result in the colonization of new territories by North American birds.

“Climate change is disrupting hundreds of bird species, and thanks to community scientists all across the country, we can visualize these disruptions in real time and plan conservation efforts accordingly,” said Sarah Saunders, PhD, quantitative ecologist at Audubon and lead author of the study.

The study concludes that climate-vulnerable birds are indeed shifting their distributions at pace with changes in climate suitability due to rising global temperatures. The most outstanding examples take place during the birds’ wintering season, which is not unexpected given the more pronounced changes in temperature attributable to climate change taking place in winter months.

Notably, the study is also the first to use independently gathered volunteer observations to validate climate suitability projections. The authors of the study suggest further assessment of the habitat suitability of the newly colonized territories to determine whether these new areas can sustain the avian newcomers.

Climate Watch, an Audubon community science program that invites volunteers to count and identify select species of birds deemed climate vulnerable by Audubon climate science, provides the observation data used in the analysis. Each year, from January 15 to February 15 and May 15 to June 15, community scientists all across the country look for 12 species: White-breasted Nuthatch, Red-breasted Nuthatch, Brown-headed Nuthatch, Pygmy Nuthatch, Western Bluebird, Mountain Bluebird, Eastern Bluebird, Lesser Goldfinch, American Goldfinch, Eastern Towhee, Spotted Towhee and Painted Buntings. The dual two-week windows represent wintering and breeding seasons for the chosen species. The climate-suitable ranges for each of these species are projected to change as their habitats shift, shrink, or expand due to rising global temperatures. Regularly gathered observations allow researchers to track any shifts in species distributions.

“Climate Watch volunteers have confirmed the accuracy of Audubon’s climate projections, which show that two-thirds of North American birds are at risk of extinction by the end of this century,” said Brooke Bateman, PhD, Audubon’s senior climate scientist and lead author of Survival by Degrees: 389 Bird Species on the Brink, a report published in October 2019.

Audubon’s climate suitability projections for each of these climate-vulnerable bird species allows conservationists to protect not only the places birds need today, but also the places birds will need in a climate-altered future.

For further study, five new species have been added to the list of Climate Watch birds—the towhees, goldfinches and bunting listed above—representing birds found across a broader geographic area and in urban areas, which will allow a more in-depth look at the validity of climate suitability projections and invite even more community scientists to participate in the effort.

The National Audubon Society protects birds and the places they need, today and tomorrow. Audubon works throughout the Americas using, science, advocacy, education and on-the-ground conservation. State programs, nature centers, chapters, and partners give Audubon an unparalleled wingspan that reaches millions of people each year to inform, inspire, and unite diverse communities in conservation action. A nonprofit conservation organization since 1905, Audubon believes in a world in which people and wildlife thrive. Learn more about how to help at www.audubon.org and follow us on Twitter and Instagram at @audubonsociety.
Source: National Audubon Society