On Saturday, February 14, 2015 at the Lake Don Pedro Homeowners Association meeting, President Johnathon Oden said they have a Lake Don Pedro Community Services District (CSD) request to drill test wells at two locations in the community. Also noted was the swimming pool water can be used for fire suppression. 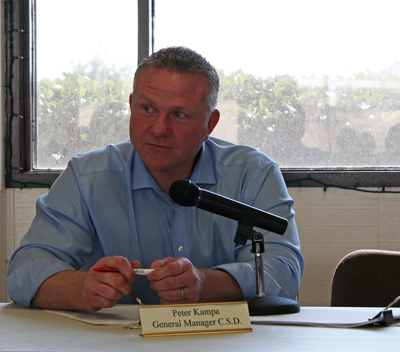 Mr. Kampa said this is a very serious situation as beside Lake McClure the district has one well that produces very little water. He noted Lake Don Pedro has upstream reservoirs where Lake McClure has no upstream reservoirs and that Lake McClure rose 10 feet with the last storm system. Mr. Kampa said NOAA predictions are for increasing drought and there is almost snowpack. Also Instream flow requirements for MID has the MID increasing flows at certain times and they cannot violate the contract. He said 163 million gallons a day are released out of Lake McClure and during January 2015 there was very little coming into the lake. The CSD uses at the peak of summer in July less than a million gallons a day.

The two floating pumps on a barge on the lake are connected to a 10 inch line that flows uphill to the storage tank and then a pump at the storage tank pumps the water to the treatment plant.

The CSD is concerned about the pumps reaching the perceived mud level of the lake. They think the mud is at about 550-560 feet, but silt or growing algae could also plug the pumps. They are planning to only go down to 560 feet because of the mud.

The Merced Irrigation District (MID) has recently been able to reduce the daily outflow out of the lake by 40%. On April 1, MID has to let more water out of the lake for fish spawning.

If there are no changes the district has to plan for the worst case scenario for the end of June 2015 for running out of water.

The CSD is implementing a Mandatory Water Conservation program. The water conservation program produces a big load on office staff time to answer questions instead of doing other work and the field workers spend more time working on the barges as they keep installing longer lengths of pipe instead of tracking down leaks and doing maintenance. The CSD does not have the workers for all the maintenance and fixing leaks that are needed. Mr. Kampa said the smaller water lines were improperly installed in 1967 and as the plastic line moves against the rocks in the ground a leak begins. The pumps coming on and turning off cause the lines to move in the ground.

The intake pumps cost an additional $20,000 a month in electricity during the summer months because of having to pump so high to reach the storage tank.

New well costs are estimated at $1.2 to $1.6 Million. The CSD has selected 11 sites for new groundwater wells and now test wells have to be installed. They are looking for a well to produce 100 gallons a minute. New groundwater wells are coming in at $400,000 each. The wells are all located in Mariposa County. The water then has to be treated so they are looking for sites with a quick hook up to the pipe coming out of the lake. An indirect well could cost another $150,000 for water treatment costs. They are looking for 3 wells and installation could take 60 days to get the wells online.  Mr. Kampa said with the one existing well and the three new wells if they are at 400 gallons a minute by June and they are at 50% to 70% Mandatory Water Conservation the district should make it.

The district needs to look at a long term source for water. A Deep Water Pump System that would run a five mile pump into deeper water in Lake McClure could cost $10-$20 Million. MID supports a Deep Water Pump System for the CSD. This system would allow the pumps to go down another 120 feet as the bottom of the lake is 440 feet. A feasibility study would let the district know their options, possibly including Lake Don Pedro water. Mr. Kampa said if they do not impose Mandatory Water Conservation they will get no grant funding. The Mandatory Water Conservation program will cost $290,000 a year because of staff time for the program and less water to sell to the community. A Water Resource Team cost could come at $100,000.

In 2014 with the Voluntary Mandatory Water Conservation program in place there was a 20% reduction over 2013. In December of 2014 this was boosted to 30%. The state is telling the District that 30% is not enough of a reduction.

The District cannot wait to see if they get grant funded. They have the money in the bank for the first well and the Deep Intake feasibility study. They were awarded a $60,900 grant toward the Barge Pump System through SWRCB in December and they have $200,000 from a grant through DWR for the first well. The District could not afford the debt on a $20 million dollar project.

The District will only run out of water if 4 things happen.
(1) The drought increases
(2) MID is required to release water per contracts
(3) The new groundwater wells do not produce the flow they need
(4) Water users do not follow conservation restrictions

Mr Kampa said the state considers the District the highest priority in the state.

If they were to run out of water:
Bottled water will be used for drinking and cooking
Bulk water stations will be installed
A potential to truck water in to keep the system charged. Estimated cost of $20,000 a day to meet a 50% demand.

Water Restrictions:
If more water per household is needed because of issues like medical needs you will need to contact the district. The reductions will not be a punitive system. The District is at 30% now but it will go up.  A water restrictor could be installed for blatant disregard. 7 Units of water will be allowed for a two person home. Water use over that could be due to irrigation. The CSD is proposing no outside irrigation until the wells come online. This reduction does not include water for horses.

Peter Kampa on the question of installing a private well on the property said there is not a prohibition on this. A citizen said in Mariposa County the Homeowner CC&R's for the Association say no private wells are to be installed.

On answering questions from the public Mr. Kampa said they have one primary contractor for drilling the wells and the older wells are not being looked at as they are not in a convenient location but are considered phase two wells.
He said last year they could have applied for grants but the district decided not to as they hoped for a wet year. Mr. Kampa said there is an existing severed pipeline between Lake Don Pedro and Lake McClure but Lake Don Pedro water is not accessible. It was noted the district uses about 600 acre feet a year. Mr. Kampa is for raising the spillway at Lake McClure. Also noted was the water that is stored in the area in plastic bottles is considered safe and is Mariposa County water stored on pallets for emergency use.

Mr. Kampa has been authorized to spend up to $200,000. The District has $1.3 million in a reserved for infrastructure account.
If the District ran out of water and went broke the state would not take over and the state would mandate that they provide water.

At the end of the meeting Mr. Kampa said he would like a year from now to have four high producing wells and a deep water system installed all being grant funded.Graphics that were presented at the meeting 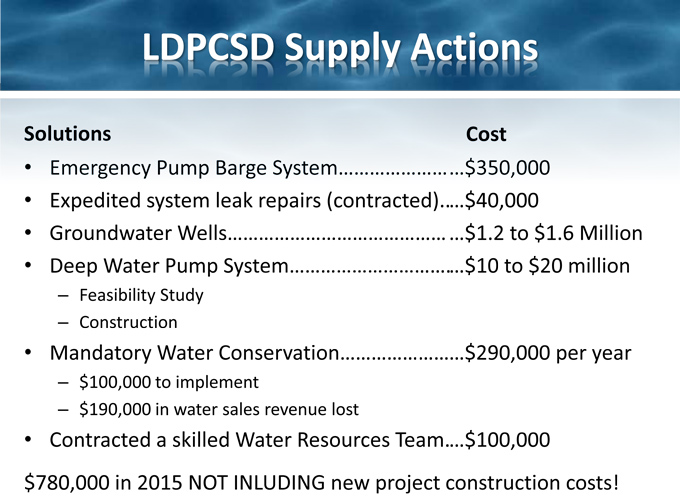 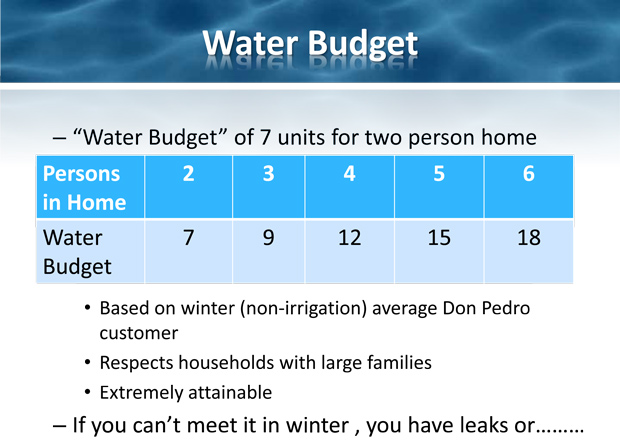 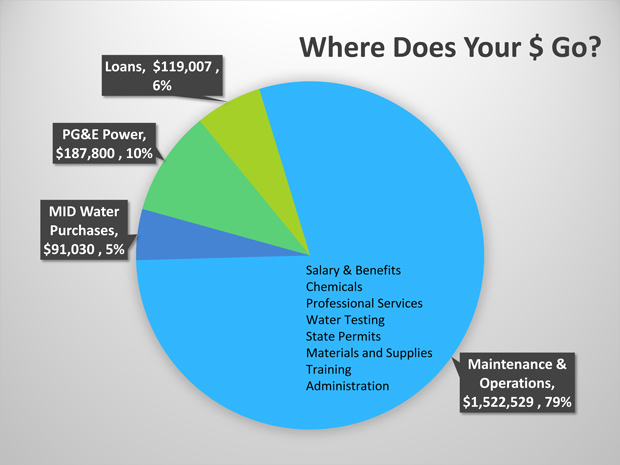