June 27, 2020 - Hatcheries operated by the California Department of Fish and Wildlife (CDFW) in the Central Valley just completed the final 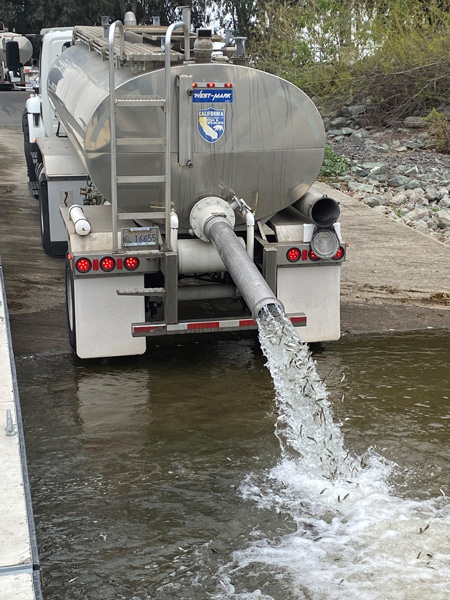 release of young Chinook salmon raised this year. More than 20 million young salmon, called smolts, raised in four state-run hatcheries were released in various locations throughout the Sacramento and San Joaquin River systems, the Delta, San Pablo Bay and into a coastal net pen. These fish will return as adults to Central Valley tributaries to spawn in two to five years. They will provide a bulk of the commercial and sport catch of Chinook salmon off the California coast. Similarly, annual returns of hatchery reared salmon provide a large portion of the in-river sport fishing catch of Chinook salmon.

“This year was especially challenging with the restrictions involved due to COVID-19,” said Colin Purdy. “But rearing, tagging and releasing these young salmon was vital and essential to the future of our Chinook salmon stocks in the Central Valley. The whole process started last fall when eggs were taken at the hatcheries.”

In 2019, an estimated 271,697 Chinook salmon were harvested off the California coast by commercial fishermen, while approximately 88,464 were caught by recreational anglers and inland river fishermen reeled in more than 28,000. The four Central Valley hatcheries operated by CDFW, and Coleman National Fish Hatchery operated by the U.S. Fish and Wildlife Service, produced the bulk of the 2019 harvest. California’s commercial and recreational salmon fishery is estimated to generate more than $500 million in annual income.

Once the hatcheries rear the young salmon, the second phase of CDFW’s work is to tag a defined portion of the total production with tiny coded wire tags to allow scientist to track their eventual contribution to sport and commercial fisheries and their return rates. The last stage is releasing them in a variety of locations and in a manner that balances maximum survival for commercial and recreational fisheries and protection of genetic fitness to ensure long-term survival of the species. Releases take place at various locations along their home rivers, downstream in the Sacramento and San Joaquin rivers, and into net pens in San Pablo Bay or along the coast.

Giant tanker trucks specially modified to carry salmon smolts are used to release millions of smolts from late February until June. They deliver hundreds of thousands of smolts weekly, via more than 50 individual releases. In most cases three to five truckloads of smolts are delivered during each release. The Feather River Hatchery routinely releases smolts into San Pablo Bay, a 250-mile roundtrip, while the longest run is from Mokelumne Hatchery to Monterey, at 340 miles.

“The coordination and logistics of spawning, rearing, tagging, transporting and releasing millions of smolts is a challenging job under normal circumstances,” Purdy said. “More than 100 employees, from fish pathologists to hatchery managers, staff and truck drivers, have to be scheduled throughout the cycle, well in advance of final release of fish. In light of this year’s rapidly evolving conditions and challenges, the completion of our 2020 releases is an especially sweet success.”

Hatchery workers typically have a wide range of job skills, making it possible to keep operations running even though hiring, training and supervising new workers during the last few months was not possible.