UCLA professor Ron Avi Astor: “Social workers are telling us loud and clear that meeting basic human needs for a large number of students is the big issue schools face in the fall.”

July 21, 2020 - Mary Braswell - As school districts nationwide grapple with how and when to safely reopen in the midst of the COVID-19 pandemic, a survey of 1,275 social 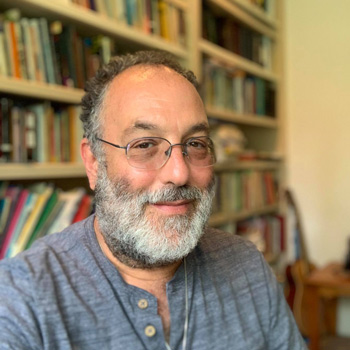 workers across the United States shows the immensity of the challenge ahead.

The results of the survey, conducted by UCLA and research partners from Loyola University Chicago, Cal State Fullerton and Hebrew University, were published today in a research brief that calls on elected officials and other leaders to act quickly and invest heavily to bolster the nation’s schools.

In addition to concerns about online learning platforms and physical distancing protocols, the school social workers reported that many students and their families are struggling with their most basic needs during the COVID-19 era.

“They’re reporting overwhelming numbers of students who don’t have food, who don’t have stable housing or health services, whose families are suffering,” said the study’s co-author, Ron Avi Astor, a professor of social welfare at the UCLA Luskin School of Public Affairs who also has a faculty appointment at the UCLA Graduate School of Education and Information Studies.

“The national dialogue on reopening schools is not focused on this right now, but the social workers are telling us loud and clear that meeting basic human needs for a large number of students is the big issue schools face in the fall.”

The social workers who were surveyed work with students from preschool to 12th grade, mostly in low-income and minority communities. Serving on the front lines in the most underserved schools, the social workers are uniquely equipped to identify the students’ social, mental health and physical needs — and to help address them once states and schools enter  into a recovery phase, he said.

As one social worker who participated in the study noted, “Creating equitable education isn’t about checking off to-do lists. It’s about getting into the work of getting to know the needs of the community and meeting them where they are.”

The brief calls for the creation of a national rapid-response team including  teachers, administrators, medical professionals, counselors, psychologists and social workers to provide guidance for schools as they weigh in-person, online or hybrid learning models.

“Every school district is reinventing the wheel over and over and over again, and we think it would be wise to have a clear national strategy,” Astor said.

The report also recommends that a national technical assistance center be created to help any school adjust its procedures, if needed.

“The reality around this virus is changing day to day,” Astor said. “We can’t just have one plan at the beginning of the year and wait until the end of the next year to find out it didn’t work.”

► Related: Will schools be safe this fall?

The policy recommendations call for the hiring of a massive number of social workers, nurses, psychologists and other professionals in the hardest-hit schools, many of which serve low-income and minority students.

“That’s going to cost money. But the teacher can’t do it alone,” said Astor, who added that state and federal investment is needed to expand support staff in schools that have historically been underfunded.

“If our country has trillions of dollars to bail out large, wealthy corporations, we also have enough to create a Marshall Plan–like program to rebuild and provide basic supports to the nation’s students, schools and communities,” he said.

The report’s authors noted that their findings come amid calls for systemic change spurred by the Black Lives Matter movement. “The question of how to reopen and reinvest in schools that serve under-resourced communities and students of color has gained prominence and urgency,” they wrote.

In addition to providing resources and support for mental health, food, housing, transportation and medical services, a team of professionals is needed to locate and reengage the large number of students — up to 30%, according to some reports — who rarely showed up once classrooms went virtual this spring, the report said.

The recommendations are aimed at avoiding a “lost generation” of students, Astor said.

“That would be the epitome of social injustice,” he said. “We need a campaign to bring students who dropped out or disengaged due to systemic inaction back into the fold. We need to show that our schools are not just about sitting in the classroom and learning math or other academic subjects — that we care about their well-being as a whole.

“That’s a very important message for our country to send this generation of students and their families.”
Source: UCLA