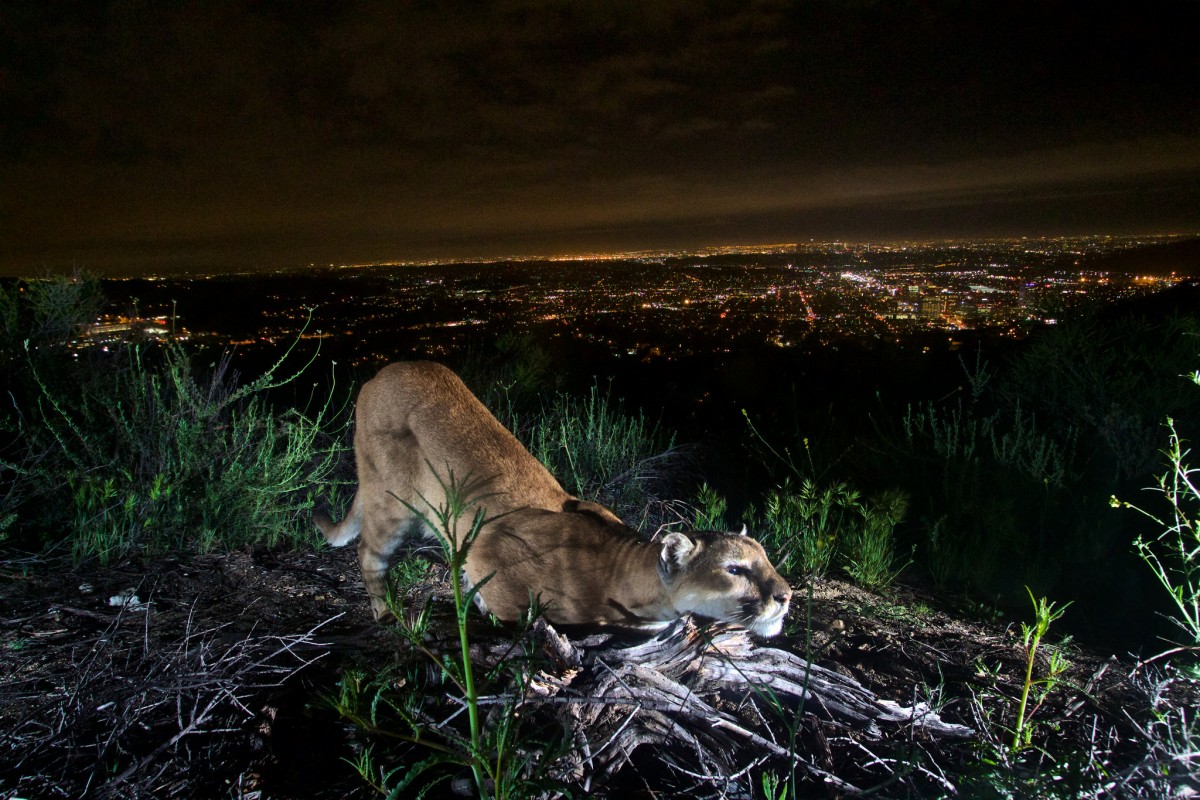 Los Angeles is one of two megacities in the world that have big cats living within the city limits. This photo taken with a motion sensor camera set up by researchers with Santa Monica Mountains National Recreation Area shows an adult female mountain lion cheek-rubbing to leave her scent on a log with the city’s lights in the background. Photo by National Park Service.

connectivity ordinances—the first of their kind in California. Ordinance No. 4537 and Ordinance No. 4539, which increase protections for important designated wildlife corridors connecting the Los Padres National Forest, Santa Monica Mountains and Simi Hills, were challenged in court by industry groups last year.

“Ventura County should be hailed for finding sensible solutions to the crisis facing our local wildlife, particularly mountain lions and other species that travel to and from Santa Monica Mountains National Recreation Area,” said Dennis Arguelles, Los Angeles program manager for the National Parks Conservation Association. “We are proud to defend Ventura County’s innovative wildlife measures, and work with them to ensure these majestic creatures continue to be part of our local landscape.”

“Time is running short for our region’s iconic wildlife as they struggle for survival in an increasingly developed and fragmented landscape,” said Jeff Kuyper, executive director of Los Padres ForestWatch. “The corridor Ordinances ensure a safe future for animals and enjoy broad support amongst scientists and the community. We look forward to diligently defending them in court.”

The ruling, issued by Ventura County Superior Court Judge Kevin DeNoce, comes as the California Fish and Game Commission moves toward protecting mountain lions in Ventura County and throughout southern and central California under the state’s Endangered Species Act.

“The Ordinances give Ventura County a powerful weapon in the local fight to protect wildlife from the extinction crisis,” said J.P. Rose, an attorney at the Center for Biological Diversity. “These are sensible measures that help safeguard mountain lions, red-legged frogs and other cherished and imperiled animals in Southern California.”

The Ordinances were adopted by the Board of Supervisors in March 2019 after a 2-year stakeholder process with landowners, wildlife advocates, industry groups, scientists and county planners. In response, the Ventura County Coalition of Labor, Agriculture and Business, and the California Construction and Industrial Materials Association filed lawsuits attempting to block the Ordinances.

“We are encouraged by this ruling that will ensure wildlife in Ventura County will have better access to habitats and migration routes on landscapes barraged by roads and other infrastructure,” said Pamela Flick, California program director for Defenders of Wildlife. “Defenders will continue to fight to protect these ordinances and are hopeful they will be used as a template for other communities to make space for wildlife.”

The ruling grants “intervenor” status to Los Padres ForestWatch, Defenders of Wildlife, the Center for Biological Diversity, and the National Parks Conservation Association, giving the conservation groups the opportunity to file briefs and ensure that the interests of wildlife are strongly presented to the court. The groups are represented by the Environmental Law Clinic at the University of California, Irvine School of Law.
Source: NPCA