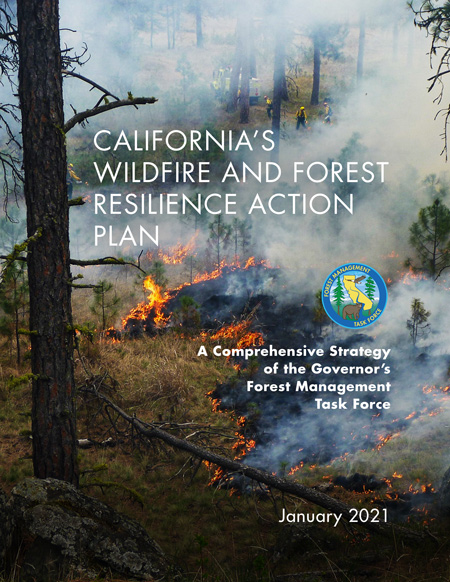 action plan to reduce wildfire risk for vulnerable communities, improve the health of forests and wildlands and accelerate action to combat climate change.

The Wildfire and Forest Resilience Action Plan (PDF download) sets a broadly supported strategy to increase the pace and scale of forest and wildland management to meet the state’s target of completing projects on 500,000 acres annually by 2025 and expanding the use of prescribed fire, particularly on state-owned lands. The plan calls for achieving these goals largely through regional strategies tailored to the environmental conditions, risks and priorities in each area.

Wildfires burned over 4 million acres across California in 2020, more than the 2017 and 2018 fire seasons combined. Hotter, drier conditions in the state’s forests driven by climate change and the consequences of a century-old legacy of fire suppression have disrupted natural wildfire behavior and generated unparalleled risk of catastrophic wildfire across landscapes from coastal redwoods to chaparral and oak woodlands.

“Catastrophic wildfires represent a severe and worsening threat that requires bold action,” California Secretary for Natural Resources Wade Crowfoot said. “To meet this multigenerational challenge, we need to shift our paradigm and invest in a scaled-up, cohesive strategy built on science to restore landscapes and protect communities.”

“Fire has been part of California’s landscape since time immemorial,” California Secretary for Environmental Protection Jared Blumenfeld said. “Our critical partnerships with Tribes across the state have taught us that our relationship with forests requires a deep and holistic engagement which at its core incorporates traditional ecological knowledge and modern science to protect the health of California’s most vulnerable communities.”

The action plan is the product of a two-year collaborative effort and aligns the state’s strategy with other federal, local, tribal, regional and private organizations. It also links the state’s wildfire resilience programs to its climate, biodiversity and economic development goals.

Federal, local, regional and non-governmental organization representatives voiced support for the action plan and the collaboration it represents:

Randy Moore, Regional Forester, Pacific Southwest Region of the U.S. Forest Service: “On behalf of the U.S. Forest Service and the Pacific Southwest Region, I commend the collaboration and work of the Forest Management Task Force during the past two years. This work is a testament to our collective commitment to shared stewardship in California. We have made progress on all lands, but much work remains to be done. This action plan provides a framework for community fire protection and forest resilience. With all of our partners, the Forest Service is committed to implement the plan, which will benefit people and economies in rural and urban communities while also addressing the effects of climate change.”

James Gore, President, California State Association of Counties: “With wildfires setting catastrophic records year after year, the time is long overdue to make substantial, sustainable changes to our forest management practices. We applaud the progress that this report represents, and our counties support the regional approach to building wildfire resiliency and improving the safety of our communities.”

Jay Ziegler, Director of External Affairs and Policy, The Nature Conservancy in California: “Following a record 4.2 million acres burned in 2020, exacerbated by a changing climate, we need urgent investment in proactive measures to save lives and empower conditions necessary to improve wildfire resilience across our state. Governor Newsom’s Wildfire and Forest Resilience Action Plan is absolutely critical to reducing the risk that severe wildfires pose to our communities, air quality, wildlife and water supplies. We look forward to working with the Administration and the Legislature to implement the Plan and shape a resilient future for people and nature.”

John Battles, Professor of Forest Ecology, UC Berkeley: “California’s Wildfire and Forest Resilience Action Plan relies on the best available science to address the pressing forest and wildfire crisis in the state. At the same time, it recognizes that we are confronting novel ecological conditions under a changing climate. Thus, it is not only a call to action but also a charge to understand the forces that threaten our forests and to translate this understanding into effective management and policy.”

The Wildfire and Forest Resilience Action Plan builds on significant progress to date by the Newsom Administration and the State Legislature to tackle California’s forest health and wildfire crisis: