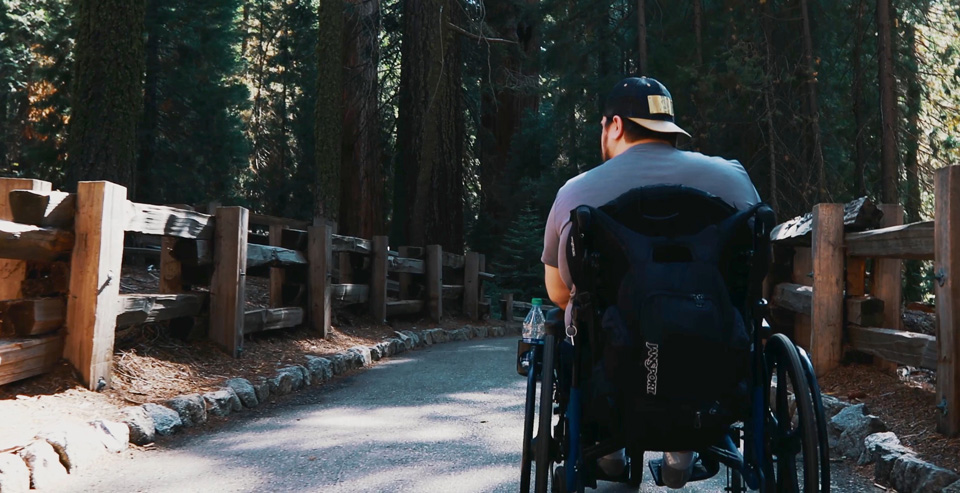 The film series features local visitors speaking about how their experiences in the parks are enhanced by accessibility considerations.
Photo by Brian Peterson

February 21, 2021 - SEQUOIA AND KINGS CANYON NATIONAL PARKS, Calif. – Across the nation, National Park Service sites are working to improve access for people with disabilities. In recent years, Sequoia and Kings Canyon National Parks have modified many trails, features, and facilities to make them more accessible and comfortable for all visitors.

To promote and share information about these improvements with the many people who might benefit from them, the parks are releasing a series of short films showcasing several of the parks’ accessible activities, in partnership with the Independent Living Center of Kern County. The series features people hiking accessible trails such as the Panoramic Point Trail, riding the Sequoia Shuttle, enjoying a Crystal Cave tour, and camping in one of the parks’ many wheelchair-friendly campsites.

Throughout the six films in the series, each of which is about four minutes long, local visitors from California’s Central Valley share their experiences of participating in activities that have accommodations for people with mobility issues, low-vision or blindness, and/or hearing loss. Each short video includes insider tips for planning a trip to the parks and participating in these activities.

The parks will be releasing the six films through a series of Facebook Premiere events, the first of which will take place on Monday, February 22, at 4 p.m. Rangers will be participating in the event and available to answer questions in the comments section. To join, visit www.facebook.com/SequoiaKingsNPS

All six films are also available for viewing, including audio-described versions, at https://go.nps.gov/SEKIaccessfilms

This film series was created by Peterson Film and Photo, with the help of Sequoia Parks Conservancy, and generous financial support from the Jeangerard Family Foundation, which has contributed over one million dollars to the parks’ efforts to improve accessibility.

To learn more about accessible features in these parks, or to get a copy of the parks’ accessibility guide, visit www.nps.gov/seki/planyourvisit/accessibility.htm
Source: Sequoia and Kings Canyon National Parks