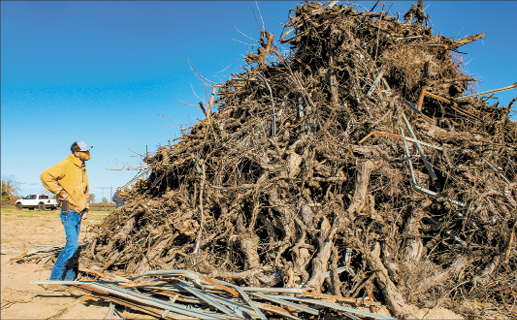 Grape grower Chris Gillespie looks over one of many piles of recently removed zinfandel vines at his Acampo farm. Gillespie and his father, Curt, say no viable option exists for disposal of these vines other than burning, because of the steel wires enmeshed in the vines. The California Air Resources Board has voted to phase out most agricultural burning in the San Joaquin Valley by 2025.
Photo/Kevin Hecteman

March 8, 2021 - By Kevin Hecteman - Curt Gillespie and his son Chris have tall piles of grapevines awaiting disposal at their Acampo farm. The piles won't be going anywhere for a while.

There has been an uptick in vineyard removals in the area, resulting in a backlog of burn requests being made to the San Joaquin Valley Air Pollution Control District.

In the Gillespies' case, it may be six months to a year before the removed vines can be burned.

"If we had a viable option, I'm all for not burning, but I don't know what the viable options are right now," Curt Gillespie said.

Chipping and recycling the vines comes with a hazard: The vines' support wires have enmeshed themselves into the wood over time.

"The old-timers would wrap the cane when it was growing around the wire," Gillespie said. "Eventually, it grows into the wire. The wire becomes part of the vine."

"There's no way that I know of that we can get the steel and the grape material separated other than burning," he said.

The need for alternative means of disposing of removed vineyards and orchards came up repeatedly during a virtual public hearing prior to the Air Resources Board vote, as numerous farmers and agricultural organizations made clear help will be needed to accomplish the phase-out.

The board staff acknowledged as much, noting that $15 million to $30 million in incentive funding from local, state and federal sources will be needed. The San Joaquin Valley air district does have an incentive program in place to help farmers seeking alternatives, with information available at valleyair.org/grants/alt-ag-burning.htm.

Stan Chance, who grows almonds east of Turlock, told the board he made use recently of whole-orchard recycling—grinding up retired trees and incorporating them into the soil—and noted that the equipment involved comes with a million-dollar price tag.

"Our family farm can't afford to own these, so I'm not in control of the timing of when the job gets done," Chance said.

"Shredding services are unable to come to small farms with small blocks of land spread out miles apart," said Holtermann, who serves on the California Farm Bureau Board of Directors. "Doesn't make economic sense for them. For shredders to constantly be moving from small parcel to small parcel across several miles in order to accommodate small farmers, they would be adding additional carbon to the atmosphere for equipment transportation, as well as putting more strain on our rural roads that are already in a state of disrepair."

Holtermann urged the board to consider a clean biomass working group, "and include farmers of all sizes, to understand the true grassroots efforts and the boots-on-the-ground actions that are taking place."

Daniel Bays, who grows almonds, apricots and walnuts near Patterson, said his family also does custom brush shredding for other farms—but that it took "well over 30 years" working with equipment manufacturers to create practical shredders.

"There's still times, especially for small-acreage growers and small fields, where our brush chippers just either can't fit in the field or we can't get to that field in a timely manner," Bays said. "There just aren't enough shredders around to get that acreage covered in a timely manner."

Ryan Jacobsen, chief executive of the Fresno County Farm Bureau, asked the board to remember that trucks, tractors and stationary equipment have been replaced with newer and cleaner models as part of clean-air efforts.

"These farmers and ranchers have spent real money—hundreds of millions of dollars—with the public and private partnerships we've had that have made our air remarkably cleaner today than it was," Jacobsen said.

Robert Spiegel, a California Farm Bureau policy advocate, told the board that "Farm Bureau is committed to finding the solutions to this issue, but the solutions will require further development and dialogue on how to best achieve the benefits desired while simultaneously sustaining the agricultural economies."

In its recommendations, CARB staff noted an uptick in agricultural burning in the valley from 2011 to 2017, attributing it to droughts that prompted farmers to remove orchards and vineyards and the closing of a number of biomass facilities that otherwise could have taken the wood. About 600,000 tons of agricultural waste were burned in the valley in 2020, according to CARB figures.

Efforts to end agricultural burning go back to 2003 and the passage of Senate Bill 705, authored by Dean Florez, then a state senator and now a CARB board member. The bill sought to outlaw the practice by 2010, but several postponements have been granted. The most recent postponement expired Feb. 24, the day before the CARB meeting.

During the meeting, almond grower Chance invited the board and environmental advocates to work with farmers to help meet the 2025 deadline.

"You're trying to keep my air healthy, and I'm totally on board with that," he said. "I'm trying to keep your body healthy by keeping almonds in your granola and almond milk in your coffee. So let's work together."

(Kevin Hecteman is an assistant editor of Ag Alert. He may be contacted at khecteman@cfbf.com.)