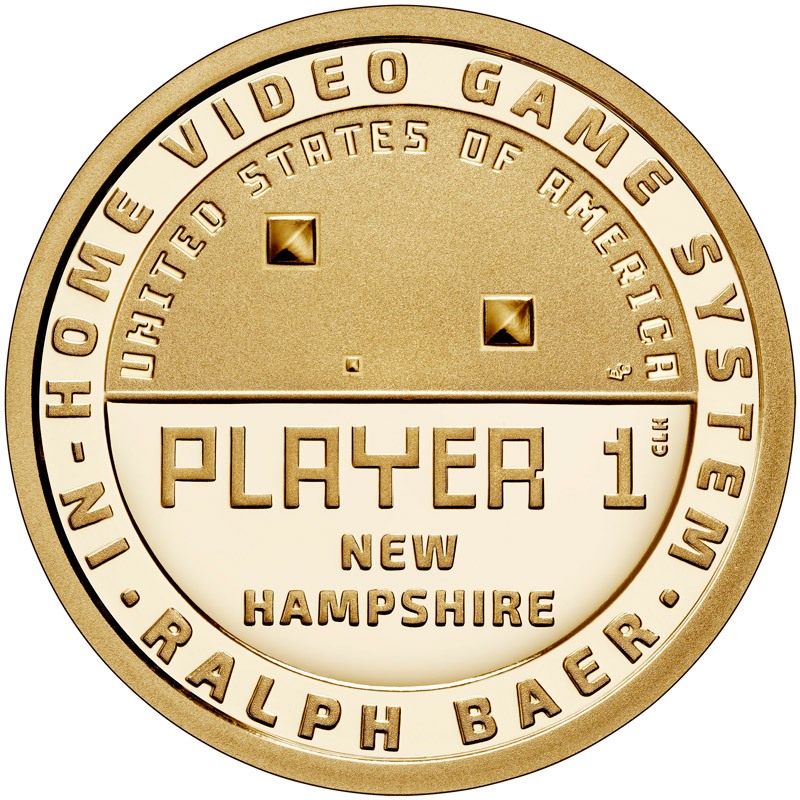 April 11, 2021 - WASHINGTON – The United States Mint (Mint) has officially announced the designs for the 2021 American Innovation® $1 Coin Program. This multi-year series that 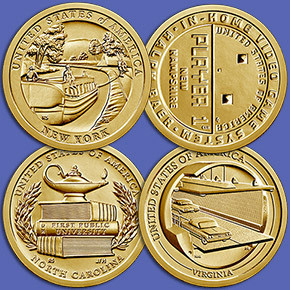 started in 2018 honors innovation and innovators by issuing $1 coins for each of the 50 states, the District of Columbia, and the five U.S. territories. The Mint works with the Governor’s offices of each state along with subject matter experts to determine design concepts emblematic of innovation significant and meaningful to their jurisdiction and/or its role in the nation. After designs are developed and reviewed, the Secretary of the Treasury selects the final design for each coin. The 2021 designs honor innovations and/or innovators from New Hampshire, Virginia, New York, and North Carolina.

“The New Hampshire series of the 2021 American Innovation Coin is a fitting tribute to both Ralph Baer, the Father of Video Games, and the pioneering, innovative spirit that each Granite Stater carries with them,” said Governor Chris Sununu. “Modern technology as we know it – stretching far beyond just video games – exists thanks to the advancements first imagined and made by Ralph Baer.”

“I grew up just a few miles from one of the world’s great engineering achievements, and it makes me proud to see the U.S. Mint honor the Chesapeake Bay Bridge-Tunnel on this Virginia coin,” said Virginia Governor Ralph S. Northam.

“Built in the 19th century, the 363-mile Erie Canal forever changed the trajectory of commercial and agricultural development and set both New York and the nation on a path towards prosperity,” said New York Governor Andrew Cuomo. “I want to thank the United States Mint for New York’s American Innovation Coin, which celebrates the Erie Canal’s rich history and recognizes the Empire State’s innovative spirit and legacy of ingenuity.”

“North Carolina is proud of its legacy of innovation in creating and supporting opportunities for all students to pursue higher education,” affirms North Carolina Governor Roy Cooper.

United States Mint Director David J. Ryder believes that the symbols of innovation chosen by the states and territories will have unifying and educational value. “The very nature of this program provides an opportunity for us to become better connected with each other by learning about the many contributions, thoughts, and ideas Americans continuously mesh together to propel our Nation forward,” he said.

American Innovation – Virginia
Designer: Matt Swaim
Sculptor-Engraver: John P. McGraw
The Virginia $1 Coin recognizes the engineering marvel of the Chesapeake Bay Bridge-Tunnel. This design depicts a view of the Chesapeake Bay Tunnel as a cross section cut away, illustrating the ingenuity involved in constructing it. Inscriptions are “VIRGINIA” and “UNITED STATES OF AMERICA.”

American Innovation – New York
Designer: Ronald D. Sanders
Sculptor-Engraver: Phebe Hemphill
The New York $1 Coin pays homage to the Erie Canal. This design depicts a packet boat being pulled from a city in the East toward the country areas to the West. Inscriptions are “UNITED STATES OF AMERICA” and “NEW YORK.”

American Innovation – North Carolina
Designer: Ronald D. Sanders
Sculptor-Engraver: Joseph Menna
The North Carolina $1 Coin acknowledges the first public institution of higher learning in the United States. The University of North Carolina at Chapel Hill opened its doors in 1795 and was the only public institution to confer degrees in the 18th century. This design features a stack of three textbooks with “First Public University” on the spine of the middle book. A lamp of knowledge is perched atop the books, and olive branches curve around the edge of the design. Inscriptions are “UNITED STATES OF AMERICA” and “NORTH CAROLINA.”

The obverse (tails) design of American Innovation $1 Coins features a dramatic representation of the Statue of Liberty in profile with the inscriptions “IN GOD WE TRUST” and “$1.” The design also includes a privy mark of a stylized gear, representing industry and innovation.

The edge-incused inscriptions are “2021,” the mint mark, and “E PLURIBUS UNUM.”

About the United States Mint
Congress created the United States Mint in 1792, and the Mint became part of the Department of the Treasury in 1873. As the Nation’s sole manufacturer of legal tender coinage, the Mint is responsible for producing circulating coinage for the Nation to conduct its trade and commerce. The Mint also produces numismatic products, including proof, uncirculated, and commemorative coins; Congressional Gold Medals; silver and bronze medals; and silver and gold bullion coins. Its numismatic programs are self-sustaining and operate at no cost to taxpayers.