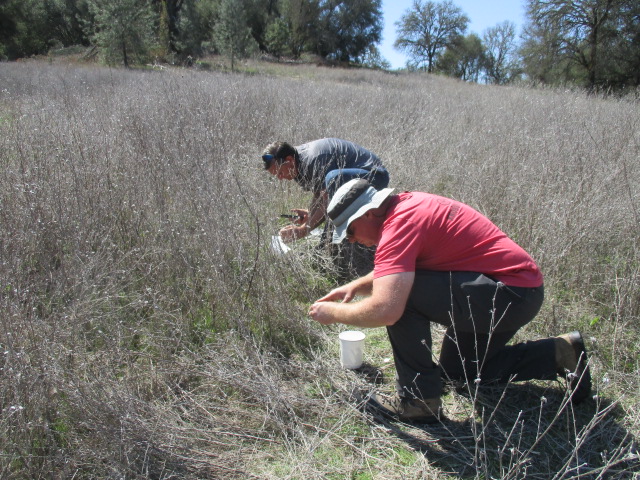 April 27, 2021 - EL DORADO HILLS, Calif. — The Bureau of Land Management, U.S. Department of Agriculture’s Agricultural Research Service and University of California Cooperative Extension have released yellow starthistle rosette weevils to combat the invasive weed, yellow starthistle, at the Magnolia Ranch day-use recreation area in El Dorado County. This is the first time the weevils have been released for biological control on BLM-managed public lands and only the second time the insect has been used in the United States.

“Collaboration, cooperation and partnership have been key for this ground-breaking weevil release to become a reality,” said BLM Mother Lode Field Manager Elizabeth Meyer-Shields. “Yellow starthistle is an invasive weed that can outcompete native plants, harm wildlife habitat, and block public access to our recreational areas.”

Non-native yellow starthistle is a noxious weed with thorny spines that is poisonous to horses and may damage the eyes of grazing livestock. In California, it can grow to shoulder height, forming massive, thorny patches that can block popular trails. The BLM Mother Lode Field Office uses herbicides, targeted sheep grazing, mowing, mechanical removal and controlled burns to fight yellow starthistle and other invasive weeds at Magnolia and Cronan ranches. However, with roughly half of the 735-acre Magnolia Ranch infested with yellow starthistle, BLM staff are turning to other environmentally responsible remedies.

The weevils are a cost-effective control method because they are less labor intensive and can treat large infestations of weeds that are difficult to access. They also are a safe option because they do not attack crops or native plants. The USDA Agricultural Research Service (ARS) in Albany, California provided the plant-eating weevils for the Magnolia Ranch release. Once the weevils are established, it is hoped they will reproduce and expand their range in the coming years.

“These weevils will complement the insects that state and federal partners have previously released in the Pacific west to attack the flowerheads and reduce the seed production of yellow starthistle,” said ARS Entomologist Dr. Lincoln Smith. “It will take several years to see results, since the weevils only have one generation per year. But once established, the populations will grow exponentially.”

Any good experiment needs a catalyst, and that was provided by the UC Cooperative Extension Service. It was their networking and on-the-ground work that brought the BLM and ARS together to arrange the Magnolia Ranch weevil release.

“One of the Cooperative Extension Service’s main purposes is to bring the latest research together in the communities where we work,” said UC Cooperative Extension Farm Advisor Scott Oneto. “Yellow starthistle impacts nearly 15 million acres throughout California and causes significant losses to ranchers and land managers alike.”

Now, the partners will be watching and waiting, instituting an intensive monitoring schedule, measuring vegetation, and pulling up plants to see if the insects are effectively boring holes in the starthistle roots and flowers. The recreating public will not notice any effects, but the BLM will avoid using herbicide application, grazing or prescribed fire which could harm the weevils near the release site.

The BLM is committed to keeping public landscapes healthy and productive. If monitoring shows the weevils are successful at reducing yellow starthistle, the Mother Lode Field Office plans to release more rosette weevils at nearby Cronan Ranch in the future.