May 5, 2021 - By Christine Souza - Boosting flows on San Joaquin River tributaries may not bring the desired benefits to populations of protected 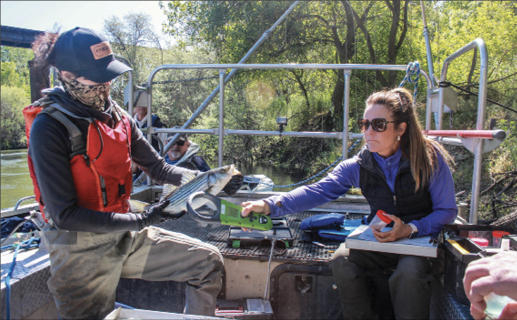 salmon—because predatory bass in the rivers apparently eat half or more of juvenile salmon, regardless of river flow, according to studies by a fisheries consulting firm.

(Left) FISHBIO fisheries biologists Tara Lamb and Chrissy Sonke examine fish collected as part of a predation study along a stretch of the lower Stanislaus River near Riverbank. Predator fish such as striped bass, FISHBIO has found, consume more than 50% of salmon in the tributary, which means salmon are unable to reach the delta.
Photo/Christine Souza

The work on the lower Stanislaus River by the firm FISHBIO ties into a long-running debate about whether more water must be retained in the rivers, and therefore unavailable for human use, to benefit protected fish. In late 2018, the State Water Resources Control Board adopted a plan that would require water users to leave "unimpaired flows" of 30% to 50% in three San Joaquin tributaries: the Stanislaus, Tuolumne and Merced rivers.

Andrea Fuller, senior biologist and principal of FISHBIO, said she and other fisheries biologists have been studying the hypothesis that salmon could be lost to predators "in high numbers."

"Now," Fuller said, "we have the data to say, even in good water years, we still have the potential for the predator population to consume upwards of 50% of the salmon produced."

"The bass are still eating salmon at 5,000 cfs at the same rate that they are at 1,000 cfs, and over a broad range of water temperatures," Fuller said. "No matter what you do with flow, you're still going to have substantial predation."

The study intends to learn the abundance of fish predators in the Stanislaus near the confluence with the San Joaquin. It was authorized in 2016 through the federal Water Infrastructure Improvements for the Nation Act, and conducted in collaboration with state and federal fisheries agencies.

With the use of "rotary screw traps" and fish-tracking technology, the FISHBIO team is estimating the number of juvenile salmon that enter and exit the river's migratory corridor, Fuller said.

"If that mantra is correct, that more flow is going to give you more fish, then where are the fish? They're not here. The numbers have dropped dramatically," she said, adding that the impact of predators "seems to be in conflict with their desire to get more flow—but it shouldn't be mutually exclusive."

As an alternative to the regulatory flow regime adopted by the state water board, water districts have pressed the state to pursue the voluntary agreements, which would include flow, habitat and funding elements.

In early 2020, state water and resource agencies released a framework for voluntary agreements, and interested parties reportedly have continued to work through the specifics.

Those negotiations have been affected by lawsuits filed by the state of California and environmental groups, after federal agencies issued new biological opinions during the Trump administration, which determined that proposed long-term operations of the federal Central Valley Project and State Water Project do not jeopardize continued existence of protected salmon and delta smelt.

In response, the state issued an environmental permit for the SWP that could place its operation in conflict with that of the CVP.

Oakdale Irrigation District General Manager Steve Knell said the delta litigation, on top of the other regulatory actions, mean "there's a lot at stake in getting to voluntary agreements."

"Federal and state (water) exporters also have risks with regard to their ability to settle their Coordinated Operation Plan issues, which are also relying on the agreements," Knell said.

"One thing's clear: With or without voluntary agreements in place, depending on your circumstances, there will be plenty of risk, pain and uncertainty for everyone," he said.

The California Farm Bureau is among the organizations that challenged the state unimpaired-flows plan in court, and Farm Bureau Senior Counsel Chris Scheuring said that unless discussions on voluntary agreements succeed, the question will be "bogged down in court dealing with the regulatory battle over the delta."

Scheuring said delta management "cannot just be a flow-centric approach. We simply cannot afford the luxury of not managing the system for all of the variables."

A second phase of the water board bay-delta plan, affecting Sacramento River tributaries, has not yet been released.