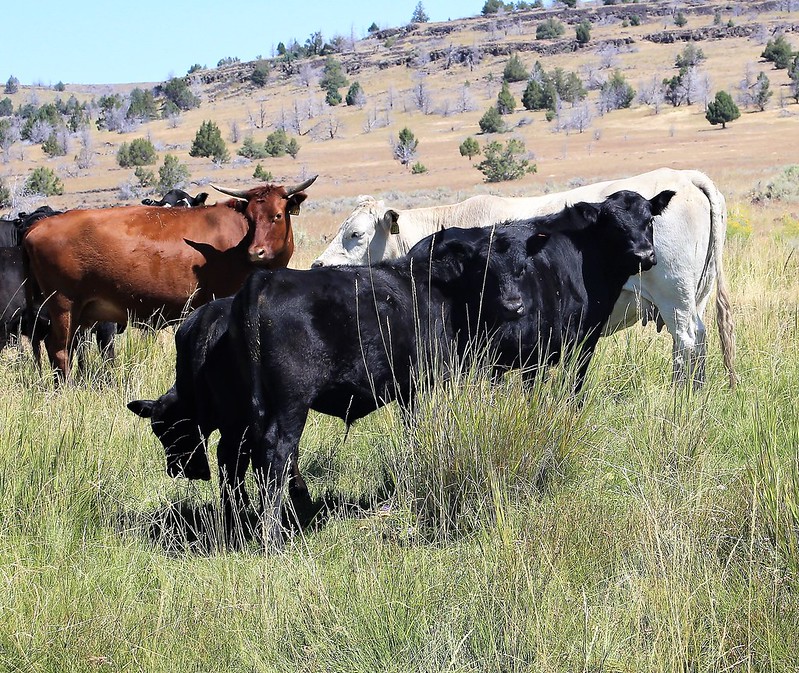 June 6, 2021 - By Ching Lee - Whether they milk cows or raise livestock for meat, ongoing drought conditions in the state have forced ranchers and dairy farmers to downsize their herds as they face soaring costs to sustain their animals.

In regions such as Marin and Sonoma counties, where farmers and ranchers rely heavily on pasture and natural rainfall to grow feed crops and provide drinking water for their livestock, the duration of the current dry spell has been particularly hard.

The U.S. Drought Monitor has classified large swaths of the region as under "exceptional drought"—the highest level of drought intensity—following two years of paltry precipitation.

Even in past dry years when pasture quality was "horrible," Marin County dairy farmer Brian Dolcini said, at least his dam filled. Typically at this time of year, it should have about 25 feet of water, he said, but there's now about 8 feet.

"There wasn't a drop that went in there this year," he said. "That's the biggest difference."

Dolcini, who operates an organic dairy in Nicasio, started hauling water about three weeks ago, to try to conserve as much water as he can from his dam.

One lesson he said he learned from the state's last major drought is not to wait to react. That's why he decided in March to install four 3,000-gallon water tanks, which he said are nearly impossible to find today. The 20,000 gallons he's hauling every week are used for the cows' drinking water and for washing the dairy barn, he noted, not for irrigating his silage crop.

Grazing season in the region typically extends into June and sometimes July, but Dolcini said this year's warmer weather and strong winds dried out springtime grasses a month early—which means he's feeding more hay and silage. With many livestock owners "trying to buy up as much as they can," Dolcini said he expects feed supplies will dwindle in coming months, especially for grain hay. Farmers who planted those crops in January could not make good production due to lack of rain, he said, and reduced water supplies mean fewer acres will be planted.

Lack of rain has shorted not just forage for grazing but the silage dairy farmers grow, with some estimating about a 50% loss on their crop, said Randi Black, a University of California Cooperative Extension dairy advisor for Sonoma, Marin and Mendocino counties. Because silage remains "such a good feed source" for milking cows, she said loss of the crop could reduce milk production and, therefore, dairy farmers' milk checks.

With more livestock owners needing to buy hay, the market has become "incredibly competitive," Black said. Some dairy farmers have reported paying about $100 more per ton compared to last year for quality lactating-cow hay. Plus, many farmers have incurred new costs of hauling water, with estimates of around $15,000 per month to pay for water and for labor and diesel to haul it, she added.

"That's a lot of money to spend," Black said, noting that Marin County has started a cost-share program to help with water-hauling costs, and Sonoma County is working to do the same.

She estimated about 85% of dairies in Sonoma and Marin counties farm organically and must follow National Organic Program rules, which require animals to graze on pasture for at least 120 days a year and obtain a minimum of 30% dry matter intake from pasture during the grazing season.

In the past, the U.S. Department of Agriculture, which administers the program, has issued "temporary variances" on the pasture rule due to drought and natural disasters, and farmers have been submitting the necessary paperwork to their organic certifiers, which will request the variance from USDA.

Categorization of the region's drought as "exceptional" should help in that process, Black noted. The drought designation also makes available additional funding through the USDA for livestock feed and water hauling, she added.

Sonoma County dairy farmer Jennifer Beretta said she has already applied for the organic variance, after ending her pasture season a month early this year. Her family has sold 15 of the dairy's heifers to reduce the herd. Now they're trying to look for organic hay, which she said has been "really hard to find." She noted that the Klamath region, where her family has been buying hay, also has been exceptionally dry this year, and hay supplies from there remain "very uncertain."

"It's just going to be really scary as you start to compete against the conventional guys" for hay, she said.

Recalling the drought of 2013-14, Marin County rancher Loren Poncia, who raises cattle, hogs and lambs, said lack of forage on pasture was a problem then, but there were at least a few storms that filled ponds to provide drinking water for his animals. During the last two years, those ponds have been drying up.

Rather than haul water as many dairies in his area are, he said he thinks many beef producers are simply reducing their herds or selling out altogether.

Poncia said he's already culled some of his cattle and is thinking about selling all his sheep. His pigs, which he described as "a very small part" of his operation, can sustain on grain, prices of which are "going through the roof"; so have a lot of his other costs, including for hay and fuel.

Unlike the state's last serious drought, when cattle prices reached an all-time high, he noted the current market is saturated and ranchers have been selling at much lower prices. Poncia said he expects he'll end up selling a lot more cattle to other states that do have grass, though he noted much of the West also remains dry.

What he won't do, he said, is keep buying feed through a drought.

"I'd rather sell all the cattle and start over than drought-feed and never know when it's going to rain again and basically empty my bank account," Poncia said.

Contra Costa County rancher John Ginochio said the last thing he wants to do is liquidate his herd, saying it's taken him decades to build its genetics. So far, he's culled about a fourth of his herd, though he said he knows many ranchers who have reduced their numbers much more dramatically.

"I just never bought so much hay in my life," he said, noting he's trying to buy enough to get him through to December, with the hope range conditions would improve by then.

Even though the cost of that hay is already "higher than heck," he said he expects prices will skyrocket further because of water cutbacks to farmers, which means "even less hay being produced."

"Everybody's in the same boat," he said. "They've got to make those decisions."

(Ching Lee is an assistant editor of Ag Alert. She may be contacted at clee@cfbf.com.)

ABOUT CALIFORNIA FARM BUREAU FEDERATION
The California Farm Bureau Federation works to protect family farms and ranches on behalf of nearly 32,000 members statewide and as part of a nationwide network of more than 5.5 million Farm Bureau members.
Source: CFBF