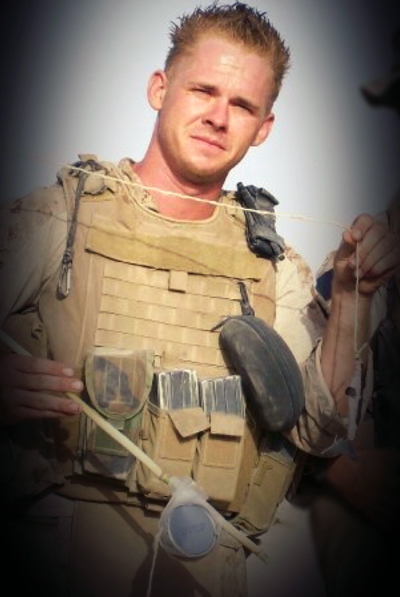 An Afghanistan combat veteran, he was an avid catch and release fly fisherman, a loving brother, friend, dad and a true American Hero.

“Billy” grew up in the Sierra Nevada Mountains of Mariposa County with his parents, Ed and Mary Ann, and his little sisters, Megan and Kayla.  Billy attended Mariposa County High School where he graduated in 2000. As a young man, you could always find Billy hiking the Hites Cove trail down into the Southfork of the Merced River with his beloved dog, “Trails,” where he would fly fish until dusk.

After graduating high school, Billy often gave credit to the Mariposa County High School Grizzlies Fire Department (GFD) for paving his way to a profession with the U.S. Forest Service and eventually joining the Sierra Hotshots. He valued his time as a Sierra Hotshots and the brotherhood he formed there. Billy implemented the Sierra Hotshot values in everything he did in life and helped instill those values in others.

In 2006, Billy temporarily left the fire service and joined the United States military with the desire to serve his country. Billy served eight years in the military, with the majority of his duty as a Navy Corpsman attached to the Marine Corps 1st Battalion 6th Marines. He served as a doc for a Marine Scout Sniper Unit while in Afghanistan. Billy fought during Operation Enduring Freedom in Afghanistan received the Combat Action Ribbon, First Good Conduct Medal, National Defense Service Medal, Afghanistan Campaign Medal, Global War on Terrorism Service Medal, Sea Service Deployment Ribbon, Nato Medal, and the Fleet Marine Force Warfare Specialist.

As an avid outdoorsman, Billy always had a dream of being in Field & Stream magazine. That dream became a reality in 2009 when Billy and his veteran brother, Nate, were in the deserts of Afghanistan and crafted fly fishing rods and reels made out of tuna cans, sticks and string. A photo of two soldiers casting fly fishing rods in the deserts of Afghanistan was published in Field &Stream Magazine. It captured Billy’s love for the sport of fly fishing and the happiness it brought him among the adversity of combat.

In 2010 he became a father to his son, Colby, who he loved beyond words. Colby has his daddy’s eyes and shares the same love that Billy had for animals and the outdoors. He inherited his dad’s love for drawing. Shortly after Colby was born, Billy joined the Tatanka Hotshots, as his desire to fight fire ran deep in his blood.

He often spoke of the beauty of the Black Hills of South Dakota and the freedom it cultivated. He was one to truly enjoy the beauty of home and the offerings of mother nature, specifically in the rivers which he enjoyed to the utmost. Most recently, Billy continued his fire journey and started his own business, “Blackfoot Fire,” where he devoted his time into preparing homeowners for fire season. In addition, he had a true passion for art and would get lost in his drawings, which captivated the soul and spoke a thousand words. To say that Billy loved giving back would be a huge understatement. Billy’s kind soul and genuine heart always outweighed the negative and the heartbreak that he experienced in his life.

The struggle of losing his brothers in arms to the negative effects of war always weighed heavy on his heart. Billy was an advocate for aiding those suffering from PTSD due to combat. There is no doubt that Billy will continue his journey of loving and protecting from the Heavens.

Billy’s mom, Mary Ann Redding, preceded him in death in 2014.

A Celebration of Billy’s Life is set for Saturday, July 28, 2018 at noon at the Circle Nine Ranch in Mariposa, a place where Billy spent the majority of his childhood making lasting memories. A private burial is set for July 30, 2018, where Billy will be laid to rest with full military honors in Igo, Calif., surrounded by his immediate and military family.  Billy will be dearly missed by all who loved him.

Here is a quote which Billy held close to his heart: “The brave never die, though they sleep in dust: Their courage nerves a thousand living men.”

In lieu of flowers, the family respectfully requests that a donation in the name of “Doc Harris” be made to the 22tooMany Foundation (www.22toomany.com), which serves veterans and strives to raise awareness of Post-Traumatic Stress Disorder, honoring the fallen and supporting their families.