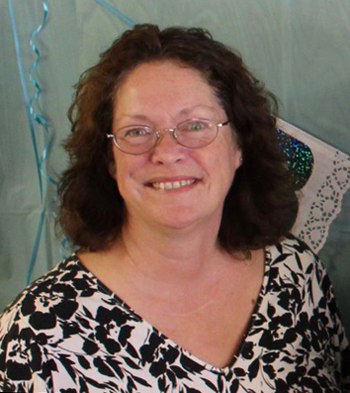 Margaret “Margie” Lynn (Allmon) Robinson, was born October 6, 1957 in Los Angeles to Larry and Margaret (Boyd) Allmon. Their ﬁrstborn child and the ﬁrstborn grandchild of Carl and Shirley Allmon and Henry and Margaret Boyd, she was joined later by ﬁve siblings.

As a child she traveled to Tangier, Morocco and Madrid, Spain with her missionary parents. Returning to the US she attended numerous schools in Southern California, graduating from Carlsbad High School in 1974.

Margie married her high school sweetheart, Terry Bruce Robinson in 1975. She worked as a travel agent in the early part of her marriage, while Terry attended art school. Twin sons were born to them in Pasadena, CA.

In 1990 the family moved to Mariposa, CA. Later their daughter was born, completing their family.

Margie worked for many years as a Paraprofessional for the Mariposa County School District only recently retiring. Although she’d been struggling with some chronic conditions for the last few years, her death came suddenly on October 24th.

Margie loved animals, would take in strays, and had an inexplicable fondness for cows. She loved musicals, lilacs and any shade of purple. She loved nearly everyone who crossed her path and wouldn’t let you get away without a hug. She eagerly reconnected with old friends when she had the chance. She loved children, especially her own and would do anything for them. She is deeply missed.

Margie was preceded in death by infant sons, Noah and Aaron, and her father, Larry. She is survived by husband, Terry; son, Matt (Mandee) McElwee; son, Chris Robinson; daughter, Emmy Robinson and her ﬁancé, Nik Ketvirtis; and two grandchildren, Emmalynn and Jackson McElwee.

In lieu of ﬂowers donations may be made in her memory to Heifer International or the charity of your choice.