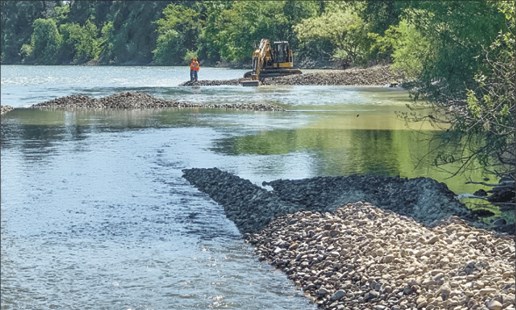 Machine operators place 12,000 tons of gravel into the upper Sacramento River near Redding to improve spawning habitat. The project is one of many projects by the Sacramento River Settlement Contractors, which include federal Central Valley Project districts in Northern California who are working with government agencies and others to improve fisheries.
Photo/Courtesy of Reclamation District 108

September 4, 2019 - By Christine Souza - To improve the ecosystem and recover fish populations, California water users and water managers routinely collaborate with state and federal fishery and water agencies and conservation groups to build habitat improvement projects that they believe will lead to a better water future for the state.

Reclamation District 108 Deputy Manager William Vanderwaal said that to complete the $429,000 project, 12,000 tons of gravel were placed into the river and developed as new spawning habitat for chinook salmon and steelhead trout. It is one of many Sacramento Valley Salmon Recovery Program projects to be completed in the past four years, he said, adding that more projects are being planned. A similar gravel project was done at the Market Street location in 2016, and another near Keswick Dam in July.

"There are four runs of salmon on the Sacramento River and the most endangered or threatened one is the winter-run chinook," Vanderwaal said. "They used to spawn upstream of Shasta Reservoir, but the installation of Shasta and Keswick dams cut off their traditional spawning grounds, so part of the Central Valley Project Improvement Act (CVPIA) includes putting in gravel for spawning in locations downstream."

John Hannon, a U.S. Bureau of Reclamation fisheries biologist, said a big part of the agency's focus is cold water management for winter-run chinook that spawn in the summer.

"The more we can restore habitat and improve fish populations, the fewer constraints there will be on water availability," Hannon said.

"Market Street is an augmentation spot where we put gravel in and as high flows come down they wash it downstream and we continuously replace the gravel," Hannon said. "It maintains about a 10-mile reach of habitat in the river there in Redding so winter-run chinook can spawn close to the dam and maintain as high a survival as we can get with the cold water that we provide."

"Biologists that do the redd (gravel nests where female salmon and steelhead deposit eggs) surveys say that although not many redds were seen initially at Market Street, at a later date, they did see a number of them," Davis said. "Gravel projects are considered to be beneficial because during high-water events the gravel will be washed downstream and create more habitat. This is why the Keswick Gravel Project upstream and Market Street will be repeated at intervals to provide gravel for the redds and to be spread further downstream."

To enhance these efforts, Vanderwaal said, at least three more projects are planned for this fall that involve adding side channels to provide rearing habitat for juvenile salmon.

"These projects are showing success with fish spawning in the gravel areas and juveniles using the side channels," Vanderwaal said.

Orland almond and prune farmer Mike Vereschagin, president of the Orland-Artois Water District, said he is happy to see that restoration funds from his water rates are being spent on projects that appear to be yielding positive results.

"We're doing our part to save the fisheries," said Vereschagin, a California Farm Bureau Federation board member. "Our water rates include a restoration fund that we all pay into, so we're accessing some of those dollars and getting more bang for the buck by the districts loaning the personnel and equipment that they have instead of hiring it out at a more costly rate. We're getting more done than if we would have hired outside contractors."

Sacramento River Settlement Contractors and others pay a "Restoration Charge" as part of their water rates to the Bureau, Vanderwaal explained, adding that this money funds the CVPIA program operated by the Bureau and U.S. Fish and Wildlife. Through that program, he said, a grant is provided to California State University, Chico, Geographic Information Center to work with Settlement Contractors and others to execute the projects.

These habitat-enhancing projects, Vanderwaal said, are the types of projects that will be included in voluntary agreements being negotiated between the state and representatives of Sacramento Valley water agencies. Water managers say they're hopeful the agreements will serve as an alternative to state-mandated "unimpaired flows" plans being drafted by the State Water Resources Control Board.

A proposal affecting Sacramento Valley tributaries would be the second phase of the water board's Bay-Delta Water Quality Control Plan. The plan affecting Sacramento River tributaries has not been released, but water-resource managers in the region said they have been collaborating with government agencies and environmental groups to develop voluntary agreements that would accomplish the goals of the state board's flows-only methodology.

"I'm optimistic that projects like this and future ones, hopefully through voluntary agreements that are set up, will restore the fish populations and make significant progress towards achieving the original CVPIA goals," Vanderwaal said. "Our water supply is heavily contingent upon the recovery of the fish runs, so we're taking steps to be proactive about helping bring back the fish run populations."

Referring to this latest round of projects on the Sacramento River, California Farm Bureau Federation Environmental Policy Analyst Justin Fredrickson said, "The hands-on, multi-tiered approach of restoring and mimicking habitats historically used by the fish is not limited to the Sacramento River.It's an on-the-ground, win-win approach that is rapidly delivering results that theorists in planning rooms have only talked about for years."

"This is what makes voluntary agreements different from the State Water Board's flows-only approach," Fredrickson said. "Tackling the many stressors that challenge the fish is also happening in places like the Stanislaus, Tuolumne and Merced rivers."