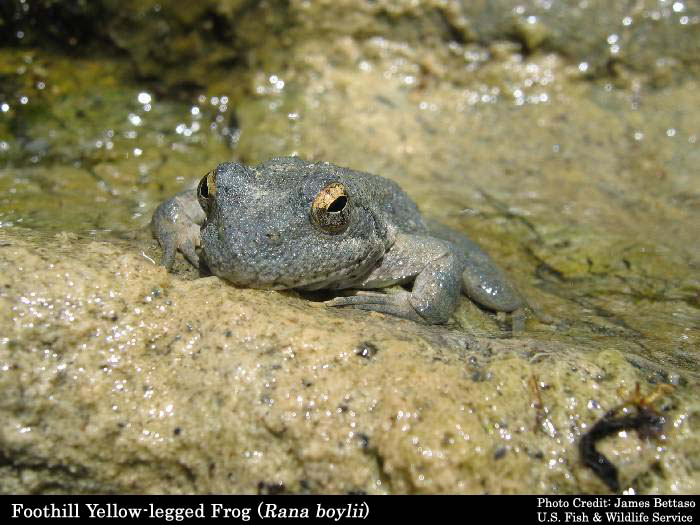 June 22, 2017 - SACRAMENTO— The California Fish and Game Commission voted on Wednesday to advance the foothill yellow-legged frog as a candidate species under the California Endangered Species Act, responding to a petition from the Center for Biological Diversity.

Candidates receive all the protections of a listed species for a year while the commission and staff decide whether to provide permanent endangered species protections. That’s good news for the foothill yellow-legged frog, which has disappeared from more than half its former locations in California.

“It’s a huge relief that these stream-dwelling frogs are finally being protected,” said Jenny Loda, a reptile and amphibian staff attorney with the Center. “Foothill yellow-legged frogs have been in trouble for years because of habitat damage caused by dams, climate change and pollutants. To save these colorful little creatures, we’ve got to take strong steps to protect the streams where they live.”

Foothill yellow-legged frogs were once found in many of California’s streams and rivers at low to moderate elevations in Pacific Coast drainages, as well as the lower western slopes of the Sierra Nevadas from the Oregon border to at least as far south as Los Angeles County and possibly to San Diego County. The species has now disappeared from all coastal streams south of San Luis Obispo County and is nearing extinction in the southern Sierra, south coast, central coast and San Francisco Bay Area regions.

“Foothill yellow-legged frogs need habitat protections and recovery efforts to avoid more population declines and stem the risk of extinction,” said Loda. “Protecting these frogs will also benefit other wildlife and many river and stream ecosystems in California that we already love and rely on for recreation, open space and drinking water.”

In addition to petitioning for California protections, the Center petitioned in 2012 to protect the foothill yellow-legged frog under the federal Endangered Species Act. The U.S. Fish and Wildlife Service will make a decision by 2020 on whether the species warrants federal protection. Two related species of native frogs that inhabit high elevation Sierra lakes and streams, the Sierra Nevada yellow-legged frog and the mountain yellow-legged frog, are already federally and state listed as endangered or threatened.

Background
Adult foothill yellow-legged frogs are moderately sized — between 1.5 and 3 inches long — with a distinctive lemon-yellow color under their legs. They inhabit partially shaded, rocky perennial streams and their life cycle is synchronized with the seasonal timing of streamflow conditions. Adult frogs move throughout stream networks from winter refugia to mating habitat where eggs are laid in spring and tadpoles rear in summer. They breed in streams with riffles containing cobble-sized or larger rocks as substrate. These frogs need perennial water where they can forage through the summer and fall months.

The largest foothill yellow-legged frog populations in California are in the north coast range, particularly in the Smith River, tributaries of the Klamath River, the South Fork Trinity River, the South Fork Eel River, Redwood Creek, coastal tributaries in Mendocino County and Russian River tributaries. However, few sites in Northern California have populations exceeding 100 breeding females per kilometer of river — what scientists consider needed for large, stable frog populations. Even in the north coast region, which is considered a stronghold for the species, frogs are gone from one-quarter of historical sites where they formerly lived.

Significant foothill yellow-legged frog populations also remain in the Diablo Range, throughout Sonoma County and in the upper Sacramento River basin. Healthy frog populations persist in many river basins in the northern and central Sierras, including the American, Clavey, Cosumnes, Feather, Merced, Mokelumne, Stanislaus, Tuolumne and Yuba rivers. But many former Sierra populations have been lost, and the majority of recent observations in Sierran national forests are of small and scattered populations with limited evidence of successful reproduction. At least half the known historical locations have been lost in every northern and central Sierra county except Plumas County.The Center for Biological Diversity is a national, nonprofit conservation organization with more than 1.3 million members and online activists dedicated to the protection of endangered species and wild places.
Source: Center for Biological Diversity