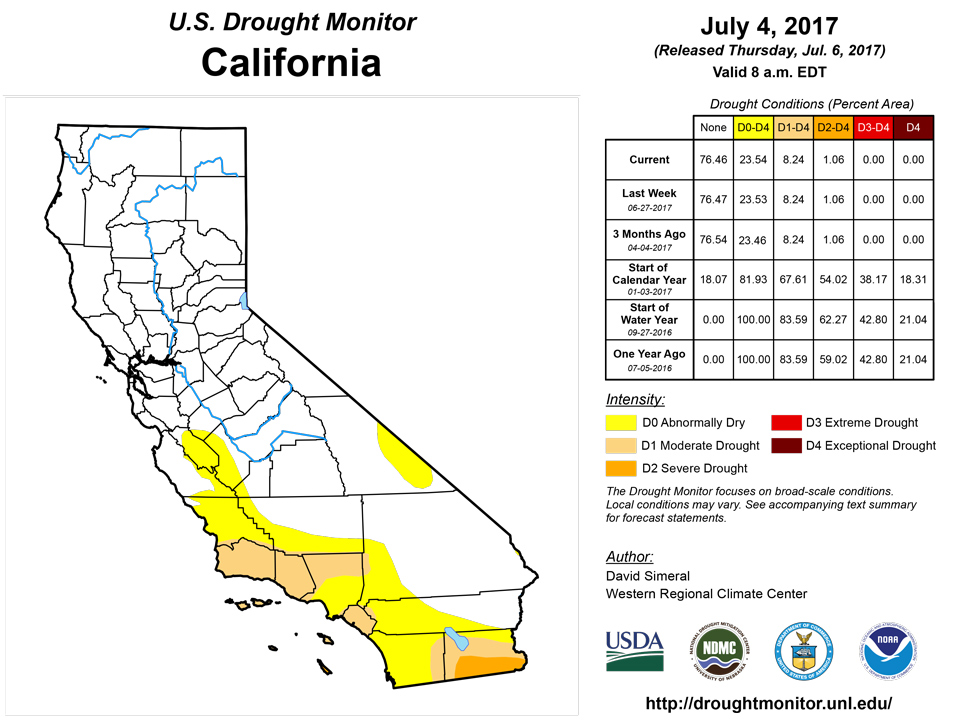 July 6, 2017 - This U.S. Drought Monitor week saw scattered showers and thunderstorm activity across portions of the central and southern Plains, Gulf Coast, lower Midwest, northern half of New England and the Southeast. Heavy rainfall was observed across northern Missouri where severe thunderstorms produced widespread accumulations ranging from 3 to 5 inches as well as two isolated areas receiving 8 to 10 inches. In the southern Plains, some improvement in drought conditions occurred in southeastern Oklahoma where 4 to 11 inches of rain fell during the past week. In the drought-stricken northern Plains and eastern Montana, rainfall accumulations were generally less than 1 inch providing little relief. Early this week, temperatures in eastern Montana soared into the 90s exacerbating already dry conditions and further stressing crops, pastures, and rangelands. Across the remainder of the West, generally hot and dry conditions prevailed with areas of the Pacific Northwest experiencing temperatures up to 10 degrees above normal. In the desert Southwest and Great Basin, firefighters have been battling large wildland fires in Arizona, Nevada, and Utah. In the South, heavy rains fells across the Gulf Coast of Alabama, Louisiana, and Mississippi. In the Mid-Atlantic, some areas of dryness have developed in portions of Delaware, Maryland, and northern Virginia. In the Northeast, heavy rains were observed in Upstate New York as well as northern portions of New Hampshire and Vermont.

On this week’s map, short-term precipitation deficits during the past 30 days led to the introduction of an area of Abnormally Dry (D0) in the eastern portion of Long Island. During the past week, the northern half of the region received significant rainfall accumulations ranging from 3 to 6 inches across the Adirondack Mountains and northern portions of New Hampshire and Vermont. Average temperatures across the region were generally slightly below normal (1 to 4 degrees) during the past week.

On this week’s map, short-term precipitation deficits, low streamflows, and dry topsoil moisture conditions led to the expansion of areas of Abnormally Dry (D0) in Delaware as well as northern portions of Maryland and Virginia. According to the U.S. Department of Agriculture (USDA) for the week ending June 25th, 56% of topsoil moisture was rated short to very short in Maryland. For the week, northern portions of the region were generally dry with the exception of some minor precipitation accumulations (generally less than 1/2 an inch) in the Delmarva Peninsula and northern portions of Maryland and Virginia while parts of North Carolina saw 1 to 3 inch accumulations with the heaviest rains falling in the Blue Ridge Mountains. For the seven-day period, average temperatures were slightly below normal across most of the region.

On this week’s map, the remaining area of drought in the region (northeastern Georgia) was removed marking the first time since April 19, 2016 that Georgia has been drought-free on the map. During the past 30 days, the region has experienced above normal precipitation with areas in southern Alabama and northern Florida receiving accumulations of 10 to 15 inches above normal for the period. Overall, soil moisture and streamflow conditions have improved considerably across the region. For the week, average temperatures were 2 to 5 degrees below normal across most of Alabama, Georgia, and South Carolina while Florida experienced temperatures 2 to 5 degrees above normal.

On this week’s map, an area of Moderate Drought (D1) was removed in Texas Panhandle in the vicinity of Lubbock where precipitation has been above normal during the past 30 days. Elsewhere in the state, dry conditions led to expansion of areas of Abnormally Dry (D0) and Moderate Drought (D1) in the Hill Country, eastern portions of the Panhandle, and South Texas. Below normal precipitation, dry soils, and low streamflows led to the introduction of an area of Severe Drought (D2) in the eastern portion of the Panhandle. Elsewhere in the region, significant rainfall accumulations (ranging from 2 to 7 inches) were observed during the past week along the Gulf Coast of Louisiana and Mississippi. Average temperatures were 2 to 5 degrees above normal in the western half of Texas while eastern portions of the region were near to slightly below normal.

On this week’s map, some minor improvements were made in an areas of Abnormally Dry (D0) and Moderate Drought (D1) in north-central Missouri in response to heavy rains late last week. According to the U.S. Geological Survey, the daily mean discharge (in cubic feet per second – CFS) on the Grand River near Gallatin, Missouri rose from ~300 CFS to nearly 60,000 CFS in response to severe thunderstorm late last week in northwestern Missouri. In Iowa, short-term precipitation deficits (30-90 days), low soil moisture, low streamflows, and reports of poor pasture conditions led to the introduction of an area of Moderate Drought (D1) in southeastern Iowa. Another area of Moderate Drought (D1) was introduced in northwestern Iowa where precipitation deficits during the past 30 days ranged from 3 to 4 inches. In west-central Illinois, an area of Abnormally Dry (D0) was added to the map to reflect below precipitation (past 60 days) and below normal soil moisture. Average temperatures for the week were generally a few degrees above normal in southern portions of the region while northern portions were slightly below normal.

On this week’s map, areas of Severe Drought (D2) and Extreme Drought (D3) expanded across eastern Montana, south-central North Dakota, and northwestern South Dakota where hot and dry conditions persisted. In northwestern South Dakota, South Dakota State University Extension staff reported poor pasture and range conditions as well as deteriorating crop conditions (corn). In eastern Montana, hot and dry weather continued to deteriorate pasture, rangeland, and crop conditions as temperatures soared above 90 degrees. On July 1st, the National Weather Service Office in Glasgow, Montana reported several dry precipitation records were broken for Glasgow including: the driest May and June (0.72 inches) since 1918; the driest April, May, and June (1.24 inches) since 1918; and the driest January through June (2.75 inches) since 1983. According to the USDA for the week ending June 25th, topsoil moisture (percent short to very short) is as follows: Montana - 69%, Nebraska – 56%, North Dakota – 53%, and South Dakota – 63%. In the southern Plains, areas of Abnormally Dry (D0) and Moderate Drought (D1) were reduced in eastern and southern portions of Oklahoma where heavy rainfall accumulations were observed with some localized accumulations in south-central Oklahoma ranging from 8 to 10 inches. Across most of the region with exception of western portions of the Dakotas, average temperatures were slightly below normal (1 to 4 degrees).

During the past week, a dry pattern continued across most of the West. Some lesser rainfall accumulation (less than 1 inch) were observed across northern New Mexico, northern Wyoming, and southwestern Montana. In the Pacific Northwest, hot and dry conditions prevailed with average temperatures 2 to 10 degrees above normal. In the Southwest, a number of large wildland fires continued to burn in Arizona, Nevada, and Utah where monsoon moisture has been limited during the past week. In southeastern Arizona, the Frye Fire has burned ~46,000 acres (51% contained) of timber, brush, and chaparral according to the National Interagency Coordination Center. In southwestern Utah, the Brianhead Fire has burned approximately 67,000 acres and is currently 75% contained. On this week’s map, areas of Abnormally Dry (D0) were added in western Arizona, northwestern Colorado, southeastern Nevada, northeastern Utah, and southern Wyoming in response to above average temperatures (past 30 days), short-term dryness, and below normal soil moisture.

On this week’s map, no changes were made in Alaska or Puerto Rico. In the Hawaiian Islands, continued dry conditions led to the expansion of Moderate Drought (D1) onto the windward side of the Big Island where impacts to range and pasture lands are being reported by the Farm Service Agency as well as reports of water hauling for some residents reliant on rainwater catchment systems. Average temperatures were slightly above normal across the Hawaiian Islands during the past week with the largest departures observed on the windward side of the Big Island and Kauai. In Alaska, the state was generally dry across much of the Far North, Interior, Southcentral, and western Alaska (with exception of Kodiak Island which received over 5 inches this week). Modest rainfall accumulations (less than 1.5 inches) were observed in Southeast Alaska and some coastal areas around Prince William Sound. Average temperatures were slightly below normal across much of Southcentral and Southeast Alaska while the Interior and Far North were above normal during the past week.

The NWS WPC 7-Day Quantitative Precipitation Forecast (QPF) calls for moderate precipitation accumulations (1 to 3 inches) across much of the Eastern Tier of the conterminous U.S. with some heavier accumulations (3 to 4 inches) forecasted for portions of the Mid-Atlantic. Lesser accumulations (less than 1.5 inches) are forecasted for the central and southern Rockies as well as portions of the desert Southwest including eastern Arizona and southwestern New Mexico as monsoonal moisture returns to the region. The CPC 6–10 day outlooks call for a high probability of above-normal temperatures across the western half of the conterminous U.S., upper Midwest, and Florida while the Eastern U.S. is forecast to be normal. Below-normal precipitation is forecast for the Pacific Northwest, northern Rockies, and the Plains while above-normal precipitation is expected in the portions of the Intermountain West, Arizona, western Colorado, Utah, and the eastern third of the U.S.