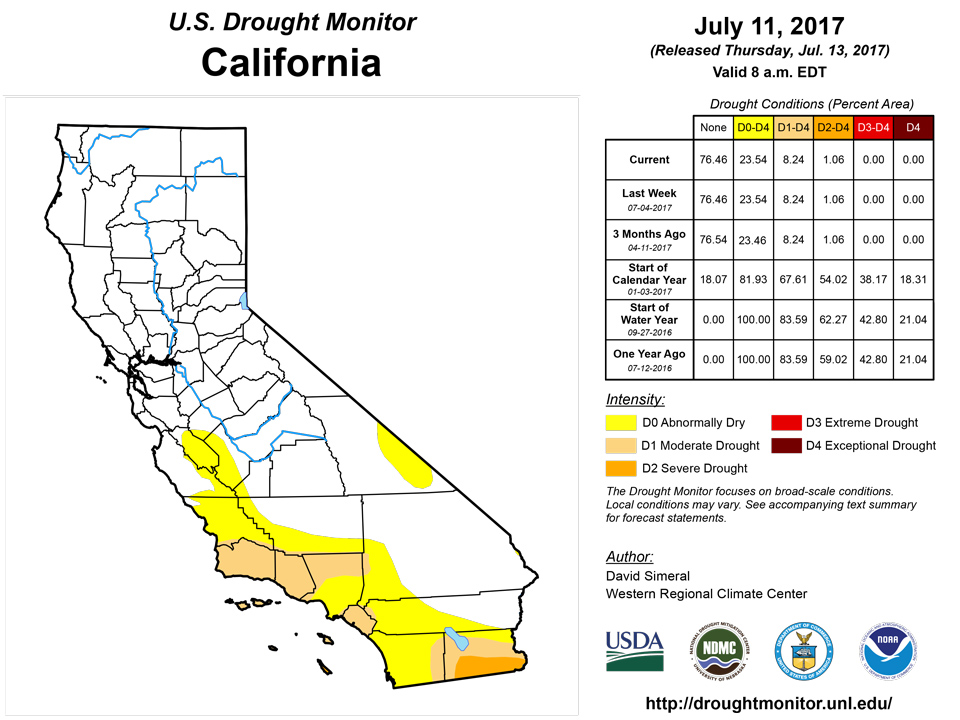 July 13, 2017 - This U.S. Drought Monitor week saw hot and dry conditions persist across the western U.S as a ridge of high pressure anchored over the region exacerbated drought conditions in eastern Montana as well as elevating fire danger across the region. According to the National Interagency Fire Center, ~70 large wildfires are currently burning across the West. On Friday and Saturday, daily high-temperature records were broken at various locations including: Las Vegas (116°F), Los Angeles (98°F), Phoenix (118°F), Reno (104°F), Boise (104°F), and Salt Lake City (104°F). Some relief from the heat came as monsoonal circulation returned to the Southwest bringing scattered showers and thunderstorms to portions of the Southwest and eastern Great Basin, although accumulations were generally less than 1 inch for the week. In drought-stricken areas of eastern Montana and the Dakotas, excessive heat continued to deplete soil moisture and further stressed rain-fed crops, pastures, and rangelands. In South Dakota, 72% of the spring wheat crop is currently rated as poor to very poor while Montana is not far behind at 62%, according the U.S. Department of Agriculture (USDA). Overall, declining conditions have resulted in the U.S. spring wheat crop being rated at 39% in poor to very poor condition. Further south in Oklahoma, rainfall during the past several weeks has led to improvements in soil moisture in eastern and southern portions of the state. Elsewhere, short-term precipitation deficits and dry soils led to expansion of areas of moderate drought in Iowa while the eastern U.S. remained drought-free on this week’s map.

On this week’s map, minor changes occurred in Long Island where the combination of short-term precipitation deficits and low streamflows led to expansion of Abnormally Dry (D0). According to the U.S. Geological Survey (USGS), streamflows in the eastern portion of Long Island are currently flowing in the 6th to 21st percentile range. During the past week, the region was relatively dry with the exception of an isolated pocket in northern Maine where heavier accumulations of 3 to 6 inches were observed. Average temperatures across the region were slightly below normal (1 to 3 degrees).

On this week’s map, areas of Abnormally Dry (D0) were reduced in response to rainfall activity (2 to 5 inches) in northern Virginia and Maryland during the past week. In northeastern North Carolina, some locally heavy rainfall accumulations (3 to 5 inches) were observed in Cape Hatteras. Average temperatures were generally above normal (1 to 4 degrees) across most of the region with the exception of western portions that were slightly below normal.

On this week’s map, the region remained drought-free. Overall, the region was relatively dry with rainfall accumulations of 1 to 2 inches across most of Alabama and Georgia while central Florida and eastern South Carolina received some heavier accumulations (3 inches). For the week, average temperatures were 1 to 3 degrees above normal across most of Florida, Georgia, and South Carolina while southern Alabama saw temperatures 3 to 5 degrees above normal. Northern portions of Alabama and Georgia were slightly below normal.

On this week’s map, improvements were made in Texas in areas of Severe Drought (D2) in the eastern Panhandle as well as in an area of Moderate Drought (D1) in the Hill Country. In the south Texas Plains, areas of Abnormally Dry (D0) and Moderate Drought (D1) were expanded in response to short-term precipitation deficits, scattered low streamflows, and dry soils. Average temperatures were near to slightly below normal across most of the region with the exception of central Texas and the northern Panhandle where temperatures were 2 to 5 degrees above normal.

On this week’s map, some deterioration in conditions occurred in the southern and northwestern portions of Iowa where precipitation has been below normal during the past 90 days with deficits ranging from 3 to 6 inches. According to the USGS, median flows on the Chariton River are well below normal (7th to 13th percentile range) in south-central Iowa. Additionally, areas of low soil moisture are showing up on the North American Land Data Assimilation System (NLDAS) in southeastern Iowa, central Illinois, and western Minnesota where new areas of Abnormally Dry (D0) were introduced on this week’s map. Average temperatures for the week were above normal (2 to 5 degrees) across western portions of the region while Indiana and Ohio were slightly below normal. Overall, the region was generally dry in western portions with some areas of west-central Illinois, northern Indiana, and northern Ohio receiving 2 to 4 inch accumulations.

Areas of Moderate Drought (D1), Severe Drought (D2), and Extreme Drought (D3) expanded across eastern Montana, North Dakota, and South Dakota where hot and dry conditions continued as well as reports of declining crop conditions and hay shortages. In South Dakota, “soybeans statewide are showing thin stands, slow growth, and small size for this time of time year” according to the South Dakota State University (SDSU) Extension. In North Dakota, small grain crop failures are being reported as well as reports of producers selling off livestock. According to the USDA’s latest Crop Progress, the percentage of topsoil rated very short to short is as follows: Montana (89%), South Dakota (79%), Nebraska (65%), and North Dakota (62%). In eastern Montana, hot and dry weather persisted with limited precipitation. According to the July 10th Montana Crop Progress (USDA), “Haying is running at least two weeks ahead of schedule in some parts of the state, but little is on the market as livestock operations are hesitant to sell given that much of the state is experiencing drought.” In the southern Plains, some minor improvements were made in areas of Abnormally Dry (D0) and Moderate Drought (D1) in Oklahoma where precipitation has been above normal during the past 30 days in contrast to below normal precipitation in central and western portions of the state where areas of Moderate Drought (D1) expanded. During the past week, average temperatures in the northern Plains and eastern Montana were 4 to 10-plus degrees above normal with the greatest anomalies observed in eastern Montana where temperatures soared into the low 100s. Overall, the region saw some isolated storms which produced only minor accumulations – generally less than 1 inch.

During the past week, the hot and dry pattern continued across most of the West with record-breaking high temperatures reported from Phoenix to Boise during the weekend. In the Southwest, the monsoon has been off to a slow start overall. Since the beginning of the month, storm activity has been spotty across portions of Arizona, Nevada, and New Mexico yielding limited precipitation amounts and elevating fire risk with dry lightning and high wind gusts. In central Arizona, a new area of Moderate Drought (D1) was added to the map in Yavapai County where short-term dryness and surface water flows are well below normal on the Agua Fria and Verde rivers. In central Utah, an area of Moderate Drought (D1) was introduced in response to below normal precipitation during the past 90 days as well as low streamflows on the Sevier River and below normal reservoir storage levels at the Sevier Bridge Reservoir (36% of average). Areas of Abnormally Dry (D0) were expanded across southwestern Utah in response to short-term dryness, dry vegetation, and pockets of below normal soil moisture. In western Colorado, short-term precipitation deficits and dry soils led to expansion of areas of Abnormally Dry (D0). In California, despite having a very wet winter, the USDA is reporting the extent of topsoil moisture rated very short to short at 70% with subsoil moisture very short to short at 75%.

On this week’s map, no changes were made in Alaska or Puerto Rico. In the Hawaiian Islands, an area of Moderate Drought (D1) was added to the central leeward side of Molokai where the Farm Service Agency is reporting deteriorating pasture conditions. Across the island chain, dry conditions prevailed with the exception of areas of the central windward and leeward sides of the Big Island that received rainfall accumulations of about 0.5 inch. Average temperatures hovered within a few degrees of normal across the islands this week. In Alaska, the state was generally dry across much of the Far North and western portions while portions of the Interior, South-central, and southeastern Alaska received 1 to 3 inch accumulations. Average temperatures were slightly below normal in southeast Alaska while the Interior and Far North saw positive anomalies ranging from 3 to 9 degrees during the past week. In Puerto Rico, 7-day rainfall accumulations in central, northern, and eastern portions ranged from 3 to 10 inches with the heaviest accumulations in the capital of San Juan.

The NWS WPC 7-Day Quantitative Precipitation Forecast (QPF) calls for moderate precipitation accumulations (1 to 3 inches) across portions of the Southwest and Central Rockies as monsoonal moisture is expected to return while the remainder of the West will continue in a dry pattern. Much of the Eastern tier of the conterminous U.S. is expected to receive accumulations ranging 1 to 3 inches with the heaviest accumulations forecasted for south Florida, eastern portions of the Carolinas, and southern New England. In the Midwest, widespread accumulations of 1 to 2.5 inches are expected across eastern and northern portions of the region. The CPC 6–10 day outlooks call for a high probability of above-normal temperatures across the northern half of the conterminous U.S., Gulf Coast, and California. Below normal temperatures are expected in southeastern Arizona, northern Texas, Oklahoma, and Arkansas. Below-normal precipitation is forecast for the Pacific Northwest, central Plains, Midwest, Mid-Atlantic, and Northeast while there is a high probability of above-normal precipitation across the Southeast, South, Southwest, Great Basin, and Intermountain West.