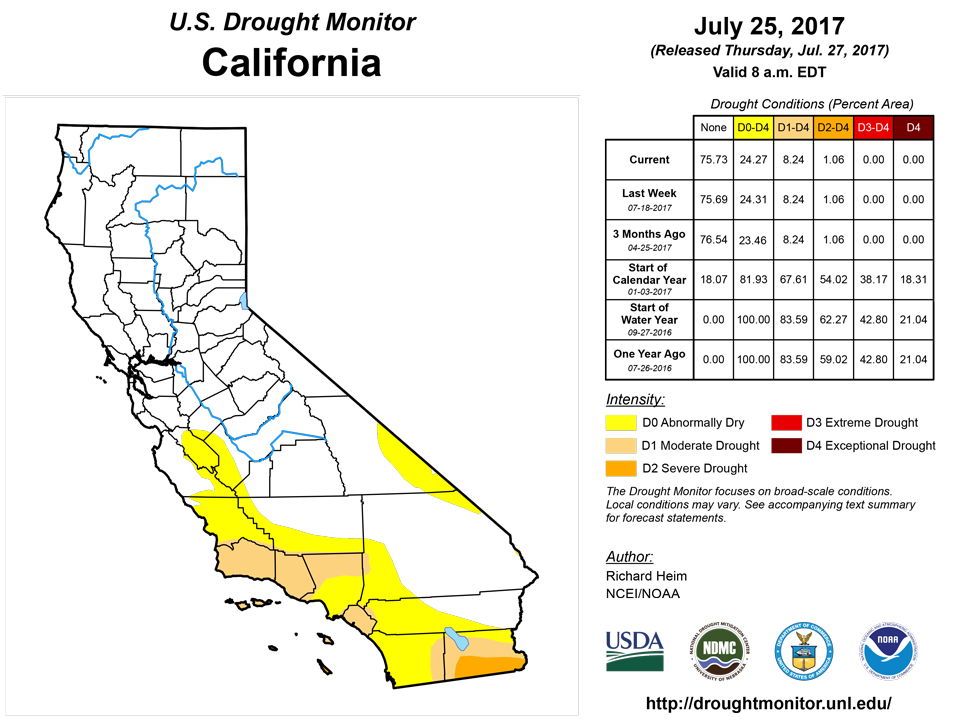 July 27, 2017 - An upper-level ridge of high pressure maintained its grip across the contiguous U.S. (CONUS) during this U.S. Drought Monitor (USDM) week. The ridge kept temperatures warmer than normal from coast to coast, with the highest temperature departures from the High Plains to Mid-Atlantic States. Weather systems moving in the jet stream flow rode over the top of the ridge, taking their surface lows and Pacific fronts along a northerly track into a trough over the eastern CONUS where they stalled out across the Midwest. Showers and thunderstorms developed as the fronts moved across the northern Plains and into the Midwest, but rainfall amounts were mostly below normal. Above-normal precipitation fell in places along the North Dakota/South Dakota border, from northeast South Dakota to northern Illinois, from the Ohio Valley to Mid-Atlantic States, and across parts of Nebraska and Kansas. Above-normal precipitation fell across parts of the southern Plains to Southeast as afternoon heating triggered convective storms, and a front near the end of the week sagged south. The Southwest Monsoon continued this week, bringing above-normal precipitation to much of the 4-Corners States and contracting drought and abnormal dryness. But drier-than-normal weather dominated the rest of the West, most of the Plains, much of the Midwest and South, and parts of the Mid-Atlantic and New England. Soils continued to dry out and crops suffered as drought and abnormal dryness continued to expand or intensify across the Plains, Midwest, northern Rockies, and Virginia.

Widespread 2+ inches of rain fell across parts of West Virginia, Maryland, Pennsylvania, New Jersey, and southern New York this week, but the rest of New York and New England generally had less than half an inch of rain. D0 was deleted around the D.C. area and trimmed in West Virginia, but D0 expanded in Maine up along the coast and then north along the New Brunswick border where 30-60-day precipitation deficits and low streamflows dominated.

Localized thunderstorms resulted in a patchwork pattern of precipitation anomalies, with below-normal areas next to areas receiving several inches of rain. Above-normal precipitation for the last 7-90 days prompted deletion of the D0 in eastern GA near Augusta. But persistent dryness over the last 1-2 months, low streamflow, and growing agricultural impacts resulted in the expansion of D0 in much of Virginia, where the percent of the state experiencing short or very short (dry or very dry) topsoil moisture rose from 42% last week to 59% this week. A fourth (26%) of Virginia’s pasture and range land was rated in poor to very poor condition by the U.S. Department of Agriculture (USDA) as of July 23. D0 was added to parts of southeast and northern North Carolina where 14-60-day precipitation deficits, decreasing soil moisture, recent heat, and declining streamflows were cited as impacts.

A few areas of above-normal precipitation contracted D0 in parts of Texas, but most areas in the South had less than half an inch of rain, with many locations reporting no rainfall. D0-D2 expanded in parts of Texas and Oklahoma, reflecting dryness and heat of the last 2 months. July 23rd USDA reports indicated more than half of the topsoil/subsoil moisture short or very short in Oklahoma (61%/67%) and Texas (55%/52%). The last 30-60 days have been dry across parts of Arkansas and northern Mississippi, drying soils. No change to the USDM depiction in these states was made this week, but it should be noted that topsoil/subsoil moisture was short to very short in 61%/41% of Arkansas and 44%/36% of Mississippi.

Showers and thunderstorms associated with a cold front dropped heavy rains from southern Minnesota to northern Indiana this week, with rainfall totals exceeding 5 inches in places. Most of this heavy rain fell outside of drought and abnormally dry areas, but it did clip some, resulting in D0 being deleted in northeast Illinois and trimmed in central Illinois and southwest Minnesota. But the drought areas that needed the rain received below-normal to no precipitation. D2 was added to Iowa, D0-D1 expanded in Iowa, and D0 expanded in much of Missouri and parts of Illinois in response to dryness and heat that has persisted over the last 2 to 2 months. The state climatologists of Iowa, Illinois, and Missouri noted that significant agricultural impacts were developing. July 23rd USDA reports revealed 52% of the topsoil and 46% of the subsoil moisture was short to very short in Iowa, with the topsoil/subsoil statistics 41%/32% in Missouri and 33%/32% in Illinois. In Iowa, 29% of the pasture and rangeland were in poor to very poor condition.

In the Southwest, several inches of rain fell with monsoon showers and thunderstorms in much of Arizona and parts of New Mexico, with 1-2 inches common across parts of western Colorado. With SPI indicators in Arizona wet at several time scales from 1 to 6 months and longer, D1 in Yavapai County was deleted and D0 or D1 were pulled back in parts of the west and south. D0 or D1 were trimmed in parts of western New Mexico and southern Nevada. But other areas were not as fortunate, with below-normal precipitation common this week across parts of New Mexico, northern Nevada, and northern Utah, where D0 was expanded. USDA statistics indicate topsoil/subsoil moisture was short or very short in 62%/60% of New Mexico, 52%/42% of Utah, 35%/25% of Nevada, and 75%/75% of California, and 41% of the pasture and rangeland was in poor to very poor condition in New Mexico. No change to the depiction was made in California.

No rain fell this week across most of the Northwest and northern Rockies, with only a tenth of an inch or two tenths recorded at coastal stations in Oregon and Washington, and at a few stations in the Rockies. The continued dryness further eroded soil moisture, with USDA reports indicating topsoil/subsoil moisture short or very short across 71%/44% of Washington, 62%/51% of Oregon, and 52%/47% of Idaho. A fifth of the pasture and rangeland was rated in poor to very poor condition in Washington (22%) and Oregon (20%). D0 was added to the interior coastal area of Washington where streamflow and modeled soil moisture were below normal, and D0 expanded across western Montana and parts of north central Idaho, and D1 added to the mountains of northwestern Montana, where 2-3 month dryness was acute and growing worse. Numerous large wildfires have broken out in this area.

Reports of worsening drought conditions have been received by the National Weather Service in Hawaii. The Dept. of Water Supply put Upcountry Maui into a Stage 1 water shortage last week which requests conservation of public water use. Vegetation and pastures in the leeward areas are also drying out per FSA report. This resulted in development of D1 across most of Maui. Agricultural impacts were worsening on the Big Island, including impacts to sweet potato farmers on the windward side and poor condition of pastures and vegetation in the interior. This resulted in the expansion of the northern D2 area toward the east to cover most of Mauna Kea and the Hamakua and North Hilo Districts. In Alaska, Nome had its wettest July day on record on the 23rd, with 1.74 inches of rain. The previous record had been 1.68 inches on July 21, 1920, and July 19, 1953. Nome also had a wet day on July 17, when 0.94 inch fell. D0 was contracted in the Seward Peninsula as a result; otherwise, no change was made to the depiction in Alaska. No change was made to the depiction in Puerto Rico.

In the 2 days since the Tuesday morning cutoff time of this week’s USDM, heavy rains moved across parts of the northern and central Plains and Midwest, and monsoon showers and thunderstorms brought additional rain to parts of the Southwest. For July 27-31, 1-2 inches of rain is forecast for parts of the Midwest to Mid-Atlantic region, coastal Southeast, and Southwest to southern High Plains. Rainfall amounts may be locally as high as 3 inches from the Midwest to Mid-Atlantic, as high as 5 inches in the coastal Southeast, and as high as 6 inches in the central Rockies to southern High Plains. Less than an inch is predicted for much of the Plains, Northeast, Great Lakes, and Lower Mississippi Valley, while no rain is expected for most of the Far West and parts of the northern and southern Plains. Temperatures are predicted to be warmer than normal in the West and cooler than normal in the East. For August 1-9, odds favor drier-than-normal weather in the Northwest, northern Plains, and Upper Mississippi Valley, and wetter-than-normal weather across the Southwest, southern Plains, and Southeast, as well as parts of Alaska. The Northeast likely will start out drier than normal but end up wetter than normal. Odds favor warmer-than-normal temperatures for Alaska, the West, northern Plains, and parts of the East Coast, and cooler-than-normal temperatures for the southern Plains to Ohio Valley.