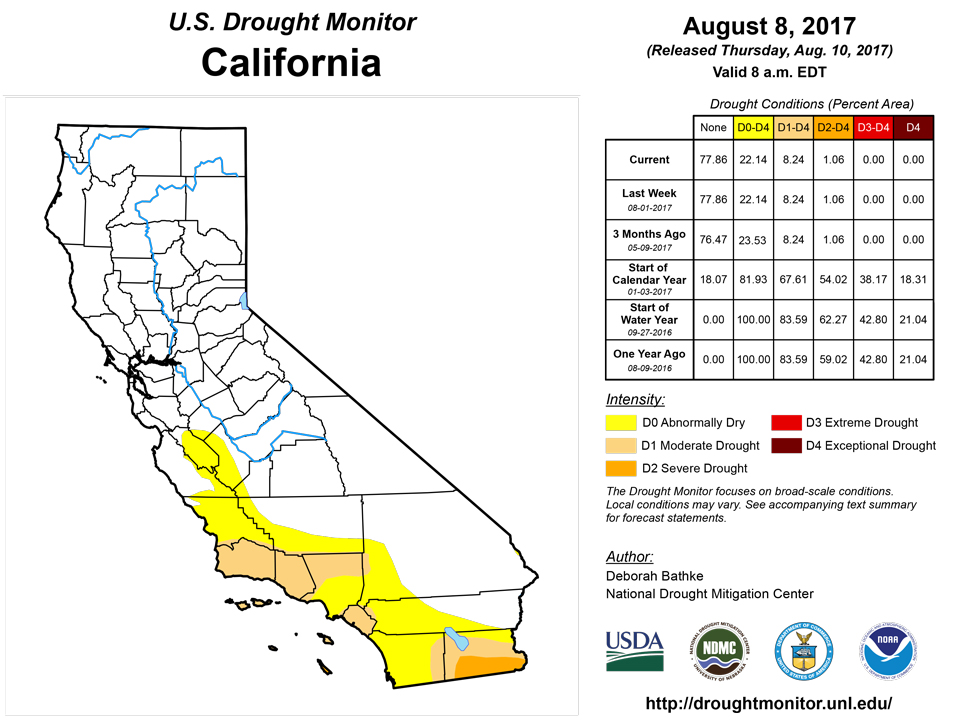 August 11, 2017 - This week was marked by torrential rains and flooding in cities such as New Orleans, Houston, Kansas City, and Las Vegas. Heavy rainfall over the Gulf Coast and into the Mid-South kept drought conditions at bay while scattered showers and thunderstorms over the southern Rockies erased pockets of abnormally dry conditions. In the drought-afflicted Plains, rains brought relief to a few areas, slowed deterioration in others, and had minimal impact on areas suffering from long-term impacts. Once again, rain bypassed the Pacific Northwest, where record-breaking high temperatures and the prolonged dry spell deteriorated drought conditions.

Much of the Northeast remains drought free with the exception of coastal Maine, which has been plagued by below-normal precipitation over the summer. While long-term totals are near normal, short-term deficits during the growing season are impacting agriculture and lawns. Abnormally dry conditions (D0) and moderate drought (D1) expanded in the areas where 30- to 60-day rainfall amounts have been less than 50 percent of normal.

Several places across south central Texas saw a month’s worth of rainfall last week, resulting in a one-category improvement for much of the area, with the exception of a few areas that missed out on the rain such as the counties located near the Rio Grande. Two-category improvements were made in a localized area that saw 4 to 8 inches of rainfall. Moderate (D1) and severe (D2) drought remain in the eastern half of the Panhandle, with some small areas of improvement in the areas receiving heavier rainfall. In Oklahoma, heavy rains (1.5 to 8 inches) in the northeast part of the state erased the abnormally dry (D0) areas. Moderate rains in central and western Oklahoma brought small shrinkages of moderate (D1) and severe (D2) drought. Rainfall deficits in northern Mississippi led to the introduction of abnormally dry conditions (D0) in areas where 30-day totals were less than 25 percent of normal.

Another week of below-normal rainfall in northern and southern Minnesota brought slight expansions to abnormally dry (D0) areas in the northwest and south central part of the state. Iowa generally saw expansions as rainfall amounts continued to fall below normal values and deficits grew. Northwest Iowa saw the addition of severe drought (D2) in areas where rainfall shortages are the greatest and crops are showing stress. The continued dryness has also resulted in the slight expansion of the band of abnormally dry conditions (D0) and moderate drought (D1) that spans the state from northwest to southeast. Increasingly dry soils and poor vegetation conditions in southwest Iowa resulted in the expansion of severe drought (D2) in this region. In Missouri, a heavy rain event over the weekend erased the abnormally dry conditions (D0) that extended from the Ozarks to the south central part of the state. The heavy rain event mostly missed the St. Louis Metro area and surrounding counties, so this region remains in moderate drought (D1). The remaining states in the Midwest remain drought free with persistent pockets of abnormal dryness (D0) in central Indiana and across southern Michigan.

Hit-and-miss rainfall throughout the High Plains brought changes in this week’s Drought Monitor to every state. In east central North Dakota, abnormally dry conditions (D0) were expanded because of continued rainfall deficits and reports of crops showing signs of drought stress. The entire state now has some level of dry/drought depiction. While other parts of the state received beneficial rainfall, it was typically just enough to “string crops along” and keep drought conditions from further deterioration in these areas. The only exception was a small area of improvement to the extreme drought (D3) conditions in the south central part of the state along the South Dakota border. This area has consistently received above-average rainfall and has 30-day totals in excess of 200 percent of normal.

South Dakota also saw a mix of improvements and degradations due to the spotty nature of last week’s rains. Locally heavy rainfall brought a full category improvement to an approximate one-to-two county wide band extending from northeast to central South Dakota. Counties along the southwestern edge of South Dakota’s drought-afflicted region missed out on the rains and saw an expansion of moderate and severe drought. The tri-state area of South Dakota, Nebraska, and Iowa also saw an expansion of severe drought (D2) conditions as rainfall deficits grew and crops began to see stress. However, Nebraska saw improvements on this week’s map. Locally heavy rainfall of 3-plus inches brought improvements to the abnormally dry (D0) areas in the northwest and southeast part of the state and the moderate (D1) and/or severe drought (D2) in the southwest and north central regions. Counties in eastern Kansas received a month’s worth of precipitation in one week, erasing abnormally dry conditions. Central Kansas saw an expansion of moderate drought (D1) as continued rainfall deficits dried out soils, lowered streamflow, and stressed vegetation.

Scattered showers and thunderstorms over the southern Rockies and Southwest brought improvements to abnormally dry (D0) regions of Colorado, New Mexico, and Arizona and the removal of moderate drought (D1) in southeastern Wyoming.

Much of the Northwest saw a degradation in conditions as the region’s hot, dry weather continued to dry out soils, stress vegetation, and cause fire restrictions to be put in place. In Washington and Oregon, abnormally dry conditions (D0) were expanded to cover the majority of both states. Montana saw an introduction of moderate drought (D1) in the northwest part of the state, which has seen increased temperatures and precipitation deficits, high wildfire activity, low surface water supplies, and fishing restrictions. The central part of Montana also saw an expansion of moderate (D1) and severe (D2) drought. Rains in the eastern part of the state primarily kept conditions from additional deterioration.

No changes were made to the map in Hawaii and Puerto Rico this week. In Alaska, increased rainfall and improvements to river levels led to the removal of moderate drought (D1) and a reduction in abnormal dryness (D0).

Since the Tuesday morning cutoff for this week’s map, rain has continued to fall on the central and southern High Plains and over a swath from south central Texas to the mid-Atlantic. For August 9-15, the National Weather Service’s Weather Prediction Center forecasts more rain across the drought-stricken regions of the upper Midwest and Great Plains. The upper Midwest and northern Plains can expect to see about an inch of rain while locations in the southern Plains and Mid-Atlantic may see amounts approaching 3 inches. Rainfall should keep temperatures in these regions near or below normal. Conditions in the Pacific Northwest are not expected to show considerable improvement over the coming week with the forecast of minimal rainfall amounts and continued warm temperatures.