September 19, 2017 - By Devon Ryan - After the wettest winter on record in 122 years, California’s waterways and reservoirs are finally replenishing to reverse the previous years of drought. But as the memory of the driest four-year period in the state’s history fades, Stanford researchers warn not to relax water conservation practices. 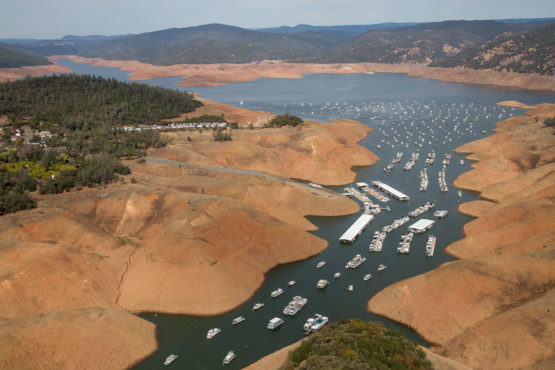 “Out of the past 50 years, more than half have been dry years in California. So at a certain point, we’re going to have to accept that extremes are actually the norm and learn to adapt to our new climate reality,” said Newsha Ajami, Director of Urban Water Policy at Stanford’s Water in the West program. “The fear is that even though we just went through the worst drought in history, people are already losing momentum in conserving water and being prepared for the next dry period.”

In order to motivate continued action on water conservation and drought preparedness, Ajami and her team developed a new interactive web portal using data from almost 400 utilities from across the state that visualizes how they performed between 2014 and 2017.

Just as the state experienced unprecedented drought, it also saw unprecedented water conservation at the local level. In 2015, Governor Brown gave the first-ever mandate to conserve water with the goal of reducing water use by 25 percent. Cities and towns across the state responded with policies to limit outdoor watering and other measures to lower water consumption.

The web portal allows users to look up how different water utilities in the state did in terms of water conservation during the drought, as well as their region’s performance and whether there was backsliding once the mandated conservation targets were lifted.

“We found marked improvement in conservation in 2015 when the mandate was in place but in 2016, once the mandatory targets were lifted and the state allowed water utilities to switch to lower self-certified goals, we saw a lot of backsliding among utilities into heavier water-use practices,” said Patricia Gonzales, a PhD student in Stanford’s Civil and Environmental Engineering Department who collected and analyzed the drought performance data.

However, even with the backsliding, the researchers explain, there are still lower demand levels for water than in 2013 and water consumption per capita is going down. The analysis found that much of the water savings experienced by utilities were from policies to limit outdoor watering to a couple days per week and behavioral changes around outdoor water use.

A tool for everyone

“The media piece is particularly valuable in our analysis because it shows that it’s people, not just policy, driving water use,” said Gonzales.

The web portal can be accessed by anyone interested in how their utilities performed, but the team hopes that decision-makers and water utilities will use the tool to understand their progress toward sustainability in the long term.

“Climate scientists are predicting that California will continue to experience intense dry periods punctuated by wet weather extremes,” said Ajami. “Californians must continue to be vigilant about conservation to enable a sustainable future.”Newsha Ajami is director of urban water policy at Stanford’s Water in the West Program and co-leads the Urban Water Systems & Institutions Thrust at the NSF-ReNUWIt Engineering Research Center. Patricia Gonzales is a PhD student in Stanford’s School of Engineering.
Source: Stanford