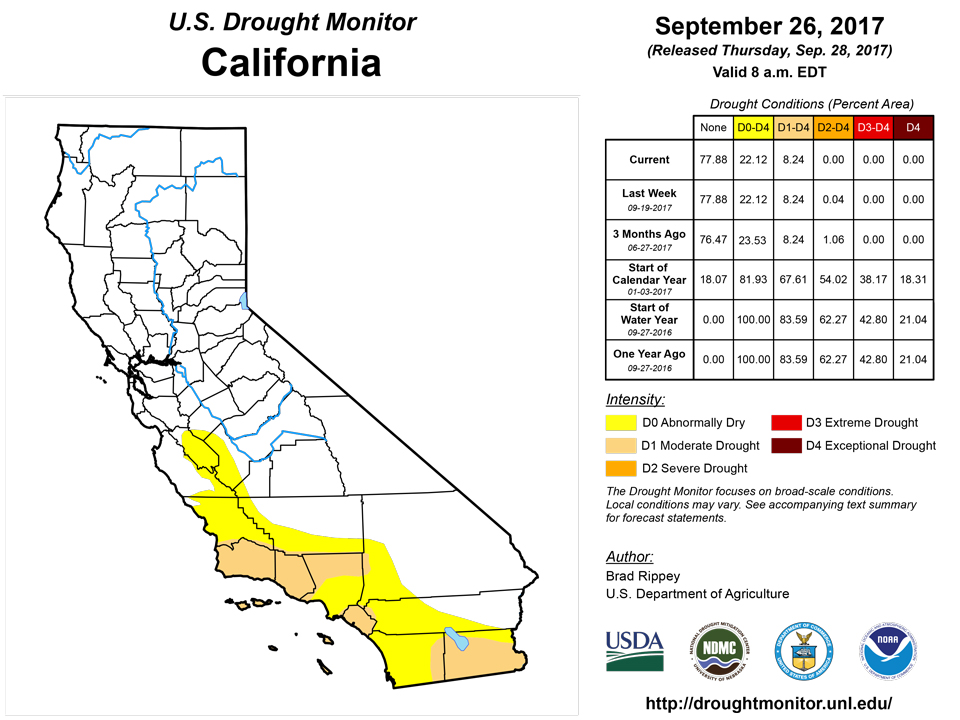 September 28, 2017 - Relatively quiet weather prevailed for much of the drought-monitoring period. Record-setting warmth accompanied the tranquil weather across the Midwest and Northeast. However, very cool weather and locally significant precipitation affected the Northwest, including the Cascades and northern Rockies, boosting topsoil moisture and further aiding wildfire containment efforts. Starting on September 23, heavy rain erupted along an axis stretching from the southern High Plains into the upper Great Lakes region. The rain put a significant dent in rainfall deficits for areas still experiencing dryness or drought.

Another week of mostly dry weather, accompanied by late-season warmth, led to the introduction of abnormal dryness (D0) in several areas. In addition, moderate drought (D1) persisted in eastern Maine, while dryness was expanded to include the remainder of coastal New England. By September 24, the U.S. Department of Agriculture reported that topsoil moisture was 77% very short to short in Maine, along with 46% in Vermont and 40% in West Virginia. Through September 26, month-to-date rainfall totaled just 1.04 inches (33% of normal) in Elkins, West Virginia, and 0.77 inch (24%) in Massena, New York.

Warm, mostly dry weather prevailed, although a few showers dotted the eastern Gulf Coast region. Hurricane Maria lurked offshore but provided showers (and gusty winds) only along the southern Mid-Atlantic coast. Pockets of Southeastern dryness (D0) expanded but remained mostly limited to Virginia and North Carolina. In Virginia, topsoil moisture rated very short to short doubled to 48% during the week ending September 24, according to the U.S. Department of Agriculture.

Heavy rain moved into the upper Great Lakes region and parts of Iowa, but the remainder of the Midwest experienced an extended period of mostly dry weather and record-setting heat. Coverage of dryness (D0) and moderate drought (D1) was further trimmed across northern Minnesota, but many other areas of the Midwest experienced an expansion of those categories. One exception was Iowa, where heavy showers led to locally significant improvement in the drought situation. From September 16-21, Ottumwa, Iowa, received 3.65 inches of rain. In many other areas, warm, dry weather was nearly ideal for promoting the maturation of developmentally delayed corn and soybeans. Despite the favorable weather, the U.S. corn crop was just 51% mature by September 24, compared to the 5-year average of 64%. However, topsoil moisture shortages were becoming acute by September 24, according to the U.S. Department of Agriculture, with very short to short ratings encompassing 77% of Illinois and 73% of Michigan. Also on the 24th, nearly one-half of the pastures were rated very poor to poor in Iowa (48%) and Illinois (45%). Chicago, Illinois reported a remarkable streak of 7 consecutive days with 90-degree heat from September 20-26. Previously, Chicago’s latest such streak of 7 days or longer had occurred from August 24 – September 3, 1953, and August 25 – September 3, 1973.

A stripe of heavy rain cut across the region from the central High Plains into the eastern Dakotas. On September 23-24, rainfall totals reached 4.04 inches in Huron, South Dakota, and 3.42 inches in North Platte, Nebraska. All dryness- and drought-affected areas within the region experiencing heavy rain saw improvement in the drought situation. This area of improvement included western and central Kansas; central Nebraska; and the eastern Dakotas. There was some minor improvement noted in areas outside of the heavy rain band. Most of the region’s rangeland and pastures continued to improve. However, lingering effects from the Dakotas’ punishing summer drought left 57% of the rangeland and pastures rated very poor to poor on September 24 in both states, according to the U.S. Department of Agriculture. In addition, South Dakota continued to lead the nation (among major production states) in very poor to poor ratings for sorghum (33%) and corn (27%).


Most of the South was dry, but heavy rain edged into western and central sections of Oklahoma and Texas late in the drought-monitoring period. Except where the rain fell, there were general increases in the coverage of dryness (D0) and moderate drought (D1), especially from northeastern Texas into western Arkansas. On September 24, topsoil moisture was at least one-half very short to short in Arkansas (57%) and Texas (52%), according to the U.S. Department of Agriculture. Louisiana’s topsoil moisture rated very short to short jumped from 6 to 40% during the week ending September 24.

Unsettled weather continued for several days from the Pacific Northwest to the northern Rockies, leading to some further reductions in the coverage of dryness (D0) and moderate to severe drought (D1 to D2). Early-season precipitation has been especially generous in west-central and northwestern Oregon; northern, central, and southeastern Idaho; western Wyoming; southern and westernmost Montana; and parts of northern Utah. From September 18-22, Stanley, Idaho, received 2.00 inches of precipitation. In Oregon, Meacham netted 2.29 inches from September 18-20. Similarly, Pocatello, Idaho, collected 2.09 inches of rain from September 19-22, aided by a daily-record total of 1.04 inches on the 21st. Snow developed across parts of the Intermountain West, where Alta, Utah, measured daily-record snowfall totals (3.4 and 11.0 inches, respectively) on September 22 and 24. However, following last week’s much-needed precipitation in the heart of Montana, drier weather returned to northern and eastern sections of the state. As a result, the areas of extreme to exceptional drought (D3 to D4) were unchanged from last week. Rangeland and pastures rated very poor to poor on September 24 included 68% in Montana and 55% in Washington. However, topsoil moisture rated very short to short by the U.S. Department of Agriculture improved in Montana from 99 to 61% during the two weeks ending September 24, while Idaho improved from 68 to 24%. The improvements in topsoil moisture should benefit recently planted winter wheat; Washington led the nation with 53% of its wheat planted by September 24. Farther south, abnormally dry (D0) conditions expanded across parts of Arizona and New Mexico due to sub-par shower activity during the second half of the monsoon season. From August 13 – September 26, Tucson, Arizona, received rainfall totaling just 0.18 inch—on the heels of a record-wet July. During the same period, Safford, Arizona, collected just 0.16 inch, which was less than 10% of normal. And, Winslow, Arizona, received only 0.59 inch (30% of normal) from August 1 – September 26.

Hawaii continued to experience warmer- and drier-than-normal weather. Lihue, Kauai, on a pace for its driest September on record, registered a daily-record high of 89°F on September 20. Through the 26th, Lihue’s month-to-date rainfall of 0.12 inch was 7 percent of normal and well below the September 2007 record low of 0.44 inch. With regard to the depiction on Kauai, severe drought (D2) was introduced along the southern coast, while moderate drought (D1) was expanded, largely due to poor pasture conditions. Meanwhile, there is neither dryness nor drought in Alaska. And, Puerto Rico continues to slowly recover from the devastating wind- and flood-related impacts of Category 4 Hurricane Maria, which struck on September 20.

In the next day or so, a cold front will push eastward across the Midwest and Northeast, bringing to an end a late-season heat wave. Meanwhile, significant precipitation will fall across southern sections of the Rockies and Plains, with 5-day rainfall totals reaching 2 to 4 inches or more from New Mexico into western and southern Texas. Some flooding can be expected in parts of the middle and lower Rio Grande Valley, where rainfall could locally total at least 4 to 8 inches. During the weekend, dry weather should return to the south-central U.S., while late-season warmth should return (or continue) across most parts of the country. An exception will be the northern Plains and the Northwest, where cool, showery weather will develop over the weekend. Little or no rain will fall during the next 5 days in the Midwestern and Eastern States (except across Florida’s peninsula), as well as California and the Great Basin.

The NWS 6- to 10-day outlook for October 3 – 7 calls for the likelihood of above-normal temperatures nationwide, except for cooler-than-normal conditions in California, the Great Basin, and the Northwest. Meanwhile, below-normal rainfall from the mid-South into the Northeast should contrast with wetter-than-normal weather in southern sections of Texas and Florida and from the Pacific Northwest into the upper Great Lakes region.