October 3, 2017 - SACRAMENTO – Sen. Bob Hertzberg, D-Van Nuys, announced on Monday that Gov. Jerry Brown has signed his legislation to ensure that Californians can continue to mark boxes on their state tax returns to contribute money to 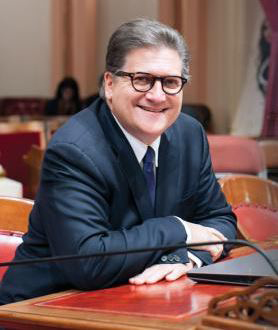 “Californians know that cancer research is a very important cause that deserves our support,” Hertzberg said. “This bill continues a significant voluntary funding stream that will help advance scientific understanding of cancer and how to defeat it.”

Each of the two funds receives about $400,000 a year from the tax checkoffs. The University of California Office of the President (UCOP) oversees the two funds and how they distribute grants, using the money for high-impact research.

The California Cancer Research Fund supports research relating to the causes, detection and prevention of cancer, including expanding community-based education on cancer and providing prevention and awareness activities for communities that are heavily afflicted by the disease.

Cancer is the second leading cause of death in California and the United States after heart disease. More than 57,000 Californians died of cancer in 2013, the most recent year for complete statistics on causes of death. The bill was sponsored by the UCOP and the American Cancer Society Cancer Action Network.

SB 1476 was the result of a Senate Governance and Finance Committee oversight hearing held in December 2015 that found problems with how the donations are managed. The committee learned that contributions could take years to reach the intended recipient and sometimes money that wasn’t spent ended up reverting to the state general fund.

The state Legislature created the tax checkoff system in 1982, and it has raised more than $102 million for charitable causes. State tax returns currently list 19 checkoffs, and those funds collect, on average, between $4 million and $5 million each year.