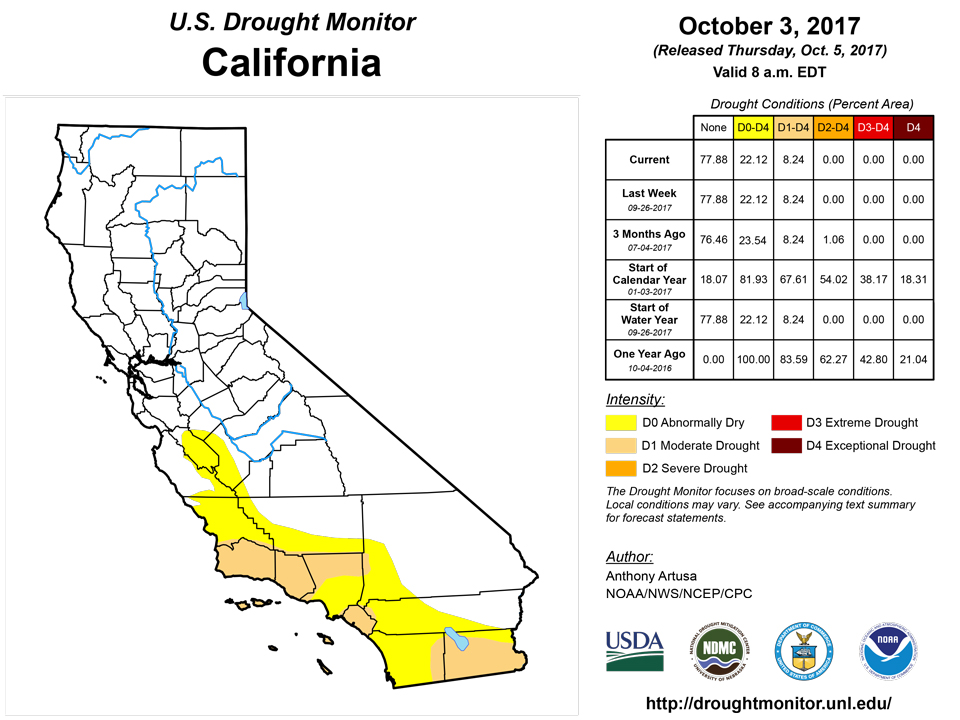 October 5, 2017 - A cold front approached the Eastern Seaboard early in the drought week, which drove Tropical Storm Maria farther away from the mid-Atlantic coast, keeping substantial impacts to a minimum. About the same time, the western edge of this cold front moved through southern Texas and New Mexico, bringing significant upslope precipitation (0.5-3.0 inches, locally greater) to the southern Great Plains and adjacent Rockies. Another cold front then moved southeastward out of central Canada, accompanied by primarily light precipitation (0.75-inch or less) to the Great Lakes region and Northeast. Towards the end of the drought week, yet another cold front progressed eastward across the Rockies, and the northern halves of the Great Plains and Mississippi Valley, bringing 1-2 inches of rain to much of the region.

Below normal precipitation was observed across the Northeast during the past 7-days. Temperatures generally went from midsummer levels to autumn levels during this time. The AHPS 60-day and (especially) 30-day Departure from Normal Precipitation (DNP) maps clearly depict the drying trend in this region. While coastal New England had already been experiencing dryness (D0) and moderate drought (D1), more recent dryness has also been showing up across interior portions of the Northeast (such as Vermont, New York, and Virginia). Stream flows throughout most of New England, and other parts of the Northeast region, range within the lowest quartile of the historical distribution, and ACIS SPI's for the past 30-days and 60-days are negative. NLDAS soil moisture anomalies currently show deficits of 1-3 inches for the top 1-meter of soil (root zone). A sampling of the latest USDA percent short to very short topsoil moisture numbers reveals 69% for Vermont (an increase of 23% from last week), 62% for Pennsylvania (up 31% from last week), and 45% for Maryland (up 7% from last week). Wetting rains (at least 0.10-inch) have not fallen in the Windsor Locks, CT, area for several weeks now. Therefore, this week's drought depiction in the Northeast shows increased spatial coverage of abnormal dryness across much of New England, portions of New York, northern and western New Jersey, extreme southeastern and extreme northwestern Pennsylvania, and eastern parts of West Virginia. Should the drying trend continue across the Northeast through the early autumn, possible impacts could include an increased fire threat for dried-out, dead leaves, and a lack of moisture for producers planting cover crops or winter grains.

Dryness in Alabama during the past two weeks resulted in rapid deterioration of conditions, though this is not all that uncommon for this time of year. AHPS Percent of Normal Precipitation (PNP) southwest of a line that stretches from Lamar to Covington Counties is below 50% for the past 30-days. ACIS 30-day (and to a lesser extent, 60-day) SPIs, and current NLDAS soil moisture anomalies, depict the dryness in this region. Therefore, D0 was added to the counties of Walker, Tuscaloosa, Bibb, Marion, Lamar, Washington, and Mobile. Abnormal dryness was also expanded across portions of western and south-central Virginia, based on these same general indicators. Browning grass has become more widespread in the past 2-4 weeks. Dryness is encroaching on the Washington/Baltimore Metro areas, but the most pronounced dryness remains west of there. In neighboring North Carolina, D0 was expanded into the western Piedmont and northern Coastal Plain. Over the past 30 days, widespread dry conditions were reported across this region with less than 50% of the normal rainfall in most areas. Stream flows have declined into below normal or much below-normal levels, reservoir inflows in the upper Cape Fear and Neuse river basins have been limited, and reports from observers indicate a drying of soils, grasses, and other plants beyond what they usually see this time of the year. Conditions are being closely monitored across the central and northern Piedmont, where precipitation has been very limited since the early summer. For now, no moderate drought (D1) has been introduced. The depiction for Georgia and Florida remains unchanged this week, pending the future evolution of what could be the next tropical storm (Nate) developing over the southwestern Caribbean.

The rapid increase in dryness across eastern Oklahoma, northern and western Arkansas during the past 30-days warranted an expansion of D0 conditions, and the introduction of several areas of moderate drought (D1). The adjusted depiction for this week is based on 30-day and 60-day PNPs, 30-day and 60-day ACIS SPIs, high wildfire potential, soil moisture deficits (1-4 inches) and local expertise. Preliminary data for southeastern portions of Oklahoma suggest this past September could be the driest on record. Generous rains fell over the drier portions of Texas this week, resulting in some improvements in the drought depiction. Light winds helped to minimize wildfire impacts. In northwestern Louisiana, a slight southeasterly shift of the D0 and D1 categories was rendered to the drought depiction. This general area has seen little to no measurable rainfall during the past 30-days, with Shreveport reporting their driest September on record (a trace). In south-central portions of Louisiana, D0 was introduced to account for the increasing dryness. Additional degradation may be needed next week across western Arkansas.


Soil moisture deficits within the root zone currently range from about 1-5 inches below normal, ACIS SPI values span 0 to -2.5, and 30-day DNPs range from 2-4 inches, across a large fraction of this region. One-category degradations were made to the drought depiction in northern and central Ohio, far western Kentucky, northern and eastern portions of Wisconsin, southern and eastern Iowa, parts of northwestern, northeastern, and south-central Missouri, and western Upper Michigan. Where positive rainfall departures (DNPs) during the past 30-days generally ranged from 2-4 inches (or more), one-category improvements were made. This included Minnesota and portions of northwestern Iowa. One of the challenges of this Midwestern depiction is how to appropriately balance earlier rainfall with ensuing dryness; the latter of which is important for crop harvesting. A short-term impact (S) label was placed in Ohio to describe the short-term nature of the dryness and drought. Illinois finished its 5th driest September, and its 4th driest August-September periods since 1895. USDA reports "very short" topsoil moisture values increased from 32% last week to 36% this week across the state. Short topsoil moisture values increased from 45% last week to 48% this week, and very short subsoil moisture values increased from 23% to 32% during the past week. Should the dryness/drought trend continue, possible impacts could include delays in planting/germination of winter wheat and cover crops, trouble with water supplies, and shallow groundwater wells running dry. In central and eastern portions of Missouri, a local expert in plant species notes increasing concern for non-irrigated Kentucky bluegrass and other turf species. The lack of precipitation has severely hampered seeding efforts for cool season turfgrasses. Late August to early October is the prime time for seeding tall fescue and Kentucky bluegrass on lawns, sportsfields, and sod farms. Without consistent, supplemental irrigation, seed may germinate but not establish due to insufficient water. Weeds such as lespedeza have been greatly encouraged by the current drought situation.

Beneficial rains (generally 2-5 inches) in the past 14-days have resulted in drought depiction improvements across North Dakota and eastern South Dakota this week. Accordingly, the impacts line was adjusted to better reflect the updated conditions across this area. In North Dakota, rainfall and cold temperatures halted agricultural progress where rainfall was significant. Short-term precipitation has been helpful, but needs to be weighed against long-term drought impacts.

In southeastern Arizona, the D0 "hole" in the depiction was filled in with D0, as there is little difference in conditions between that area and its surroundings. In Colorado, D0 was removed from the Denver area, and some D0 was trimmed away from Lake, Chaffee, and eastern Gunnison Counties. These locations received ample precipitation in September, and SPIs are mostly positive across multiple timescales. In eastern Utah (Uintah County), the western part of the moderate drought area (D1) was trimmed away. This area ended the Water Year with near average precipitation, and received above average precipitation in September. In Montana, welcome precipitation and increasing soil moisture warranted significant improvements statewide this week.

Conditions continue to deteriorate in most of Hawaii, with the core of the rainy season still several months away. In Oahu, dry conditions during September spread into the northern portion of the Koolau Range, warranting D0 expansion northward to include Laie, Kahuku, and Turtle Bay. For the Big Island, the lower-than-normal frequency of the trade winds resulted in below average rainfall and low streams along windward slopes of the Kohala Mountains. This is affecting wetland taro growth and production in the Waipio Valley, justifying a one-category degradation from D0 to D1. The Kona side of the Big Island has seen the return of significant rainfall, enabling the removal of D0 along the lower slopes (from about Kailua-Kona to Captain Cook). A small portion of the moderate drought area (D1) near the Kona Airport was trimmed back to D0 on the depiction. There is currently no drought in either Alaska or the commonwealth of Puerto Rico.

During the upcoming 5-day period (October 5-9), a meandering baroclinic zone is predicted to bring 1-4 inches of rain (locally greater amounts possible) from New Mexico across the south-central Plains, the north-central Mississippi Valley, and Great Lakes region. This may be enough to warrant some improvements across Kansas next week, if this forecast verifies. Across the eastern half of the Gulf Coast region, 2-4 inches of rain are generally anticipated, but these amounts could be exceeded if Tropical Depression 16 (TD-16) moves into that region. As of 2pm EDT, Oct 4, TD-16 is located near the coast of Nicaragua. This scenario would certainly help with some of the dryness across Alabama.

During the 6-10 day period (October 10-14), odds for above normal precipitation are elevated above climatological odds from about the western slopes of the Appalachians to the Atlantic Coast, and over extreme southern Texas. This would be expected to at least offset additional degradation across this region. From about the Mississippi Valley westward to the Pacific Coast, sub-normal precipitation amounts are favored.