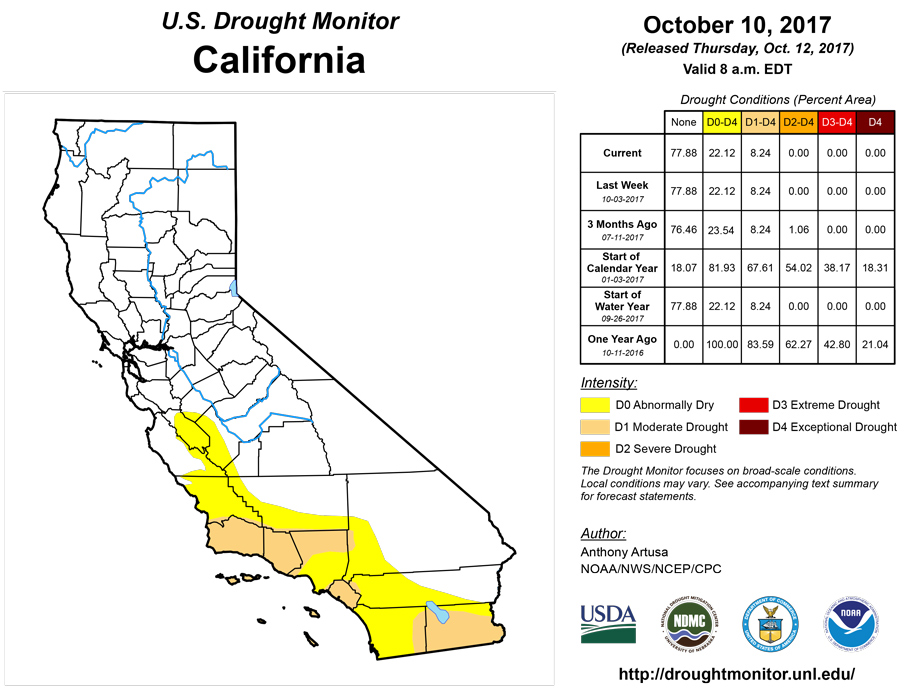 October 12 ,2017 - At the beginning of the drought week, a cold front stretched from the Upper Mississippi Valley southwestward across the Central Plains and far southern Rockies. East and south of this front, daytime temperatures reached the 70’s and 80’s, with the exception of New England which topped out only in the 60’s. During the ensuing 48 hours, the progressive northern portion of the cold front reached the New England coast, while the southern portion remained over the Central Plains. This area, from the Northeast across the Midwest to the south-central Great Plains, served as the focus for much of this week’s precipitation. By Saturday, the southern portion of this frontal boundary made some eastward progress, apparently in response to an approaching 500-hPa shortwave trough. This overall setup was conducive to steering Hurricane Nate northward from the central Gulf of Mexico to the central Gulf Coast, where it made landfall as a category-1 hurricane near the mouth of the Mississippi River, on Saturday night. The remnants of Nate brought additional rainfall to the Appalachians and Atlantic Coast states on Sunday and Monday.

According to the Advanced Hydrologic Prediction Service (AHPS), moderate rain amounts (0.5-2.0 inches) were generally reported over most of this region during the past 7-days, with parts of West Virginia and northern New York observing somewhat greater amounts (2-4 inches). The tropical moisture that worked its way into the Northeast during the second half of the drought week helped to stave off what would have been the introduction of abnormal dryness (D0) in areas such as the eastern West Virginia panhandle and northern Maryland. In the former area, abnormal dryness (D0) was trimmed out of Grant and Hardy Counties. No rain was observed in parts of the eastern West Virginia Panhandle since the middle of September, with very little precipitation during the preceding two-week period. Less precipitation (0.25-1.0 inch, locally greater) was reported in much of the Baltimore-Washington area, with little to no precipitation even farther east. In the absence of significant rainfall this week, the depiction of the I-95 Corridor region may need to show D0 next week. With the beneficial rains from Nate remaining largely west of the I-95 Corridor, the introduction of D0 was warranted for most of Delaware. This was based on 30-day and 60-day Departure from Normal Precipitation (DNP), Standardized Precipitation Indices (SPI) out through 120-days, and below normal CPC Soil Moisture values from July 31-October 9. Short-term dryness (30-days) is especially prominent in this area. Abnormal dryness was also expanded to include western Long Island, NY, as this area’s conditions appear similar to those of its surroundings. Interestingly, a USGS stream flow gauge in Valley Stream in Nassau County reported above-normal flow on October 10th and near-normal flow on October 11th, perhaps in response to very recent, localized shower activity.

South-central and southeastern Virginia were downgraded to abnormal dryness after another week of little to no rainfall. SPIs out through 120-days, 30-day and 60-day DNPs, below-normal CPC Soil Moisture from July 31-October 9, and (in the general vicinity of Richmond, VA) low stream flows all pointed toward the need for deterioration. Abnormal dryness was also extended into northeastern North Carolina, which had similarly dry conditions. Moderate drought (D1) was introduced to south-central Virginia and the adjacent North Carolina Piedmont, based on significant AHPS DNPs out through 90-days. In North Carolina, other justifications for the downgrade included lower and declining stream flows and reservoirs, and persisting dryness across the Piedmont at timescales of 1-12 months. SPIs show some hint of dryness in the south-central Virginia/central North Carolina area extending back 180-days. Objective short-term drought blends even put this area in “D2”. This week’s drought map emphasizes the longer-term nature of the drought over central Virginia and central North Carolina, with lower emphasis on the “front-loaded” (shorter-term, 30-days) drought near the coast. This week’s rainfall largely missed out on the Piedmont region of South Carolina, warranting the widespread introduction of D0. Rain associated with Hurricane Nate (about 6 inches) over southwestern Alabama justified the elimination of the D0 area over portions of Mobile and Washington counties. Coverage of D0 was reduced in west-central Alabama, confining it to the northwest portion of Tuscaloosa County. In nearby Pickens, northern Greene, and northern Sumter Counties, which was on the outskirts of the heavier rainfall, D0 was extended to merge with the D0 in eastern Mississippi.

In northern Mississippi, indicators such as DNPs and SPIs out to 6-months, and stream flows generally below-normal for at least the past 28-days, prompted the introduction of D0 across parts of Lafayette, Union, Pontotoc, and Benton counties. Deteriorating conditions justified widespread expansion of D0 across much of central Mississippi and northeastern Louisiana. An area of moderate drought (D1) was added to the depiction in eastern Mississippi. A challenge for this week’s U.S. Drought Monitor involves trying to balance a mixture of shorter-term intense dryness (Louisiana recently reported its driest September on record) with some wetness in the 45-60 day timeframe associated with Hurricane Harvey. In southwestern Arkansas, it was decided to hold off a bit longer on introducing severe drought (D2) to the region, though some drought indicators are pointing in that direction. In Oklahoma, one-class improvements were rendered to the depiction in northern and eastern portions of the state based on the reception of ample precipitation (generally 1-3 inches, but 5 inches or more was noted in southern Osage and Pawnee Counties). In contrast, in southeastern Oklahoma, some deterioration was noted in Atoka and Pushmataha Counties, where significant deficits remain (PNPs 25%-50% for past 30-days). In Texas, a number of small-scale degradations and improvements were made, with more widespread improvements rendered over northeastern Texas.

Three to four inches of rain, or more, fell across the “tri-state” area where Minnesota, Iowa, and Wisconsin meet. This resulted in a (mostly) one-class improvement in the drought depiction across this area. One-class improvements were also made for most of the remainder of Iowa, with the exception of the far southeast, where it has been very dry over the past 5-6 weeks, warranting expansion of D1 conditions. In Illinois, 3-5 inch rains occurred south and southeast of Decatur this past week. This prompted the removal of residual D0 in this area. With the exception of the improvement over the extreme southeast corner of Minnesota, no other alterations were made in “The Land of 10,000 Lakes” this week. In Missouri, areas of D0 or D1 that received two inches or more of rain this past week saw one-category improvements. In extreme western Kentucky, portions of the D0 area were trimmed away based on recent rainfall.

In much of northern and central Kansas, a one-category improvement was rendered to the depiction, in areas that received 1-3 inches of rain above their normal weekly amounts. In contrast, D0 was introduced to southeastern Kansas, which experienced another dry week coupled with warmer-than-normal temperatures. In southeastern Nebraska, D1 was removed this week, and the “S” impact label in the western panhandle was changed to “L”, primarily due to recent wetness and the end of the growing season for summer crops. In southeastern South Dakota, additional trimming of the D0 area was performed, as anywhere from 2-6 inches of precipitation has fallen in the past two weeks. The Impacts line was adjusted accordingly. A hard frost (28 degrees F or colder) was reported on the morning of October 10th, bringing the growing season to an end for most of the state.

During the past two weeks, PNPs in most of California remained below the 25th percentile. At 30-day and 60-day timescales, the PNP pattern reveals isolated areas of 150% or more in the Sierras, southwestern, and far southern California. Rivers and streams remain in the lowest quarter of the observed distribution statewide. Firefighting resources have been taxed severely this week with the wildfires raging across north-central California; especially in and around Santa Rosa (Sonoma and Napa Counties). Precipitation that fell in the past 1-2 weeks favored the trimming away of some D0 in western New Mexico this week. However, D0 was retained in much of Caltron and Cibola counties, based on ACIS SPIs out through the past 120-days, low stream flows, and AHPS PNPs out to 60-days. In Arizona, the short-term drought status report for September, produced by the State Drought Monitoring Technical Committee, provided a recap of the Southwest Monsoon season. It noted that the majority of monsoon season rainfall fell between mid-July and early-August. This was followed by below-average rainfall and warm temperatures, which contributed to late-summer dryness. With the monsoon season therefore ending earlier than usual, much of southeastern, eastern, and central Arizona ended up with D0. In western Colorado, small-scale improvements were made thanks to beneficial precipitation that fell during the past two weeks. All short-term SPIs, and most longer-term SPIs are now showing conditions have returned to near-normal in these areas. Some one-class improvements were made in central and northeastern Montana this week. Reassessment of conditions next week in western and southeastern Montana may yield additional changes as well.

No changes to the depiction were deemed necessary in Hawaii this week. There is no dryness/drought in either Alaska or Puerto Rico at this time.

During the upcoming 5-day period (October 12-16), a band of heavy rain (2-3 inches) is predicted from southeastern Iowa across Lower Michigan to extreme northern Maine, with similar totals anticipated over extreme southeastern Florida, and the Cascades of the Pacific Northwest. One to two inches of rain is forecast over portions of the mid-Atlantic region. This raises the possibility of drought relief next week from the Midwest into northern Maine.

During the 6-10 day period (October 17-21), odds for above-normal precipitation are elevated over the Pacific Northwest and northern Rockies, as well as over Florida. Odds for below-normal precipitation are enhanced across most of the Great Plains, the southern Rockies, eastern portions of the Southern Intermountain Region, from the Ohio Valley and central Great Lakes region to the New England coast, and southwestern and south-central Alaska.