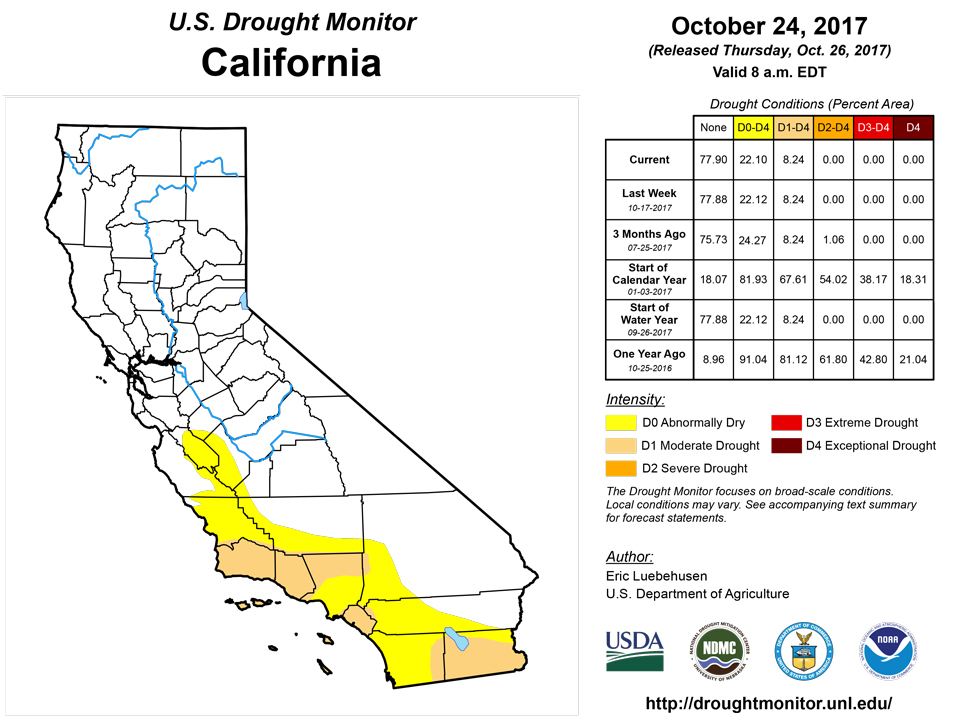 PLEASE NOTE – The Drought Monitor reflects observed precipitation through Tuesday, 1200 UTC (8 am, EDT); any rain that fell after the Tuesday 1200 UTC cutoff will be reflected in next week’s map.

October 26, 2017 - During the 7-day period (ending Tuesday morning), widespread moderate to heavy rain eased drought from eastern Texas and the southeastern Plains to the Great lakes and central Appalachians. Furthermore, a vigorous storm system brought much-needed rain and snow to the Northwest and northern Rockies. Conversely, hot, dry weather exacerbated developing drought in the lower Four Corners Region, while unseasonably warm, dry weather continued to worsen drought conditions across much of the Northeast.

Encroaching rain from the southwest did not arrive in time to be incorporated in this week’s analysis. As of Tuesday, October 24, 90-day precipitation stood at a meager 35 to 50 percent of normal from southern New York and northern New Jersey into southern and western Maine; consequently, Moderate Drought (D1) was expanded over large portions of New England. The corresponding Standardized Precipitation Index — which puts the precipitation values into a drought-intensity equivalent — are D2 to D4, indicating if precipitation does not fall soon drought expansion and intensification are likely. Current impacts range from diminishing streamflows to wells going dry. Farther south, increasingly dry conditions over the past 60 days (45-65 percent of normal) necessitated the expansion of D0 (Abnormally Dry) from central Pennsylvania into northern Maryland.

Locally heavy rainfall from east-central Gulf Coast into the central Appalachians contrasted with lingering dryness from southeastern Georgia into the central and eastern Carolinas. Moderate to heavy rain (1-4 inches, locally more) eased or alleviated Abnormal Dryness (D0) from northeastern Georgia through the Carolinas into west-central Virginia. In east-central Virginia, additional assessment of updated rainfall data in conjunction with this week’s showers (0.5-1.0 inch) supported the removal of D0, while increasingly dry conditions over the past 60 days (locally less than 60 percent of normal) led to the expansion of D0 from eastern North Carolina into the southeastern tip of Virginia.

Highly variable conditions were observed across the region during the monitoring period. Soaking rain (1-4 inches, locally more) was reported over eastern portions of Texas and Oklahoma, supporting the reduction or removal of Abnormal Dryness (D0) and Moderate Drought (D1). However, rain bypassed the increasingly-dry portions of central and eastern Louisiana, with D1 added to locales where 60-day rainfall has totaled 20 to 50 percent of normal. Furthermore, despite this week’s showers in western and northern Arkansas’ D1 areas, 60-day precipitation totals still averaged a meager 5 to 50 percent of normal; consequently, more rain will be needed over the upcoming weeks to prevent drought expansion or intensification. Across central and western Texas, short-trend dryness was becoming more pronounced, particularly on the Edwards Plateau, while a small but discernible area of pronounced short-term drought (D1) was noted farther north along the North Wichita River, where 60-day rainfall has totaled less than 40 percent of normal.

Well-placed rainfall further eased Abnormal Dryness (D0), Moderate Drought (D1), and Severe Drought (D2). Continuing a month-long wet trend, another round of soaking rain (1-3 inches, locally more) facilitated to removal or reduction of D0 to D2 from Iowa and Missouri into Michigan and Indiana. However, several pockets of pesky D1 drought lingered from eastern Missouri into central Illinois, where 60-day precipitation totals averaged locally less than 60 percent of normal. However, even these locations have received some rain over the past month, and further assessment of conditions in the field may warrant additional drought removal over the upcoming weeks.

Dry, warm weather prevailed across the region, with no significant changes to the region’s drought depiction. However, feedback from the field coupled with additional data assessment led to small modifications of the drought areas in western South Dakota into southwestern North Dakota. In particular, satellite-derived vegetation health data as well as pasture and crop condition reports necessitated expansion of the Moderate, Severe, and Extreme Drought (D1-D3).

Heavy rain and snow were reported early in the period from the northern Pacific Coast into the northern Rockies, while hot, dry weather continued in the region’s southern tier. From the Cascades into the northern Rockies, heavy rain and mountain snow (1-6 inches liquid equivalent, locally more) led to widespread reductions of Abnormal Dryness, Moderate Drought, and Severe Drought (D0-D2). Meanwhile, a disappointing end to the Southwestern Monsoon resulted in the expansion of D0 and D1 from central and eastern Arizona into neighboring portions of New Mexico; rainfall departures of 3 inches or more are common in the aforementioned locales (25-60 percent of normal). Similar dryness was noted over the northern shores of the Great Salt Lake, where D0 was likewise expanded.

In Alaska, the state remained free of dryness and drought as cool, unsettled weather prevailed. In Hawaii, unsettled weather for much of the period was followed by locally heavy rain Tuesday morning. Windward rainfall over the past couple of weeks has helped conditions on the north through east-facing slopes of the state, while little, if any, rainfall has made it to the leeward sections. There are currently no concerns for drought in Puerto Rico as recovery efforts from the extensive catastrophic damage caused by Hurricane Maria continue.

Wet weather across parts of the East will contrast with mostly dry weather elsewhere. Welcomed showers falling across the Northeast as of Wednesday, October 25, will be followed by a potentially soaking rainfall over the weekend. Forecast guidance suggests 7-day rainfall could top 5 inches across much of New England, while somewhat lesser amounts (1-3”) fall from the central Appalachians into the Mid-Atlantic States. Rain and snow will accompany a storm system in the Great Lakes, while showers along a trailing cold front sweep across the interior Southeast. Otherwise, mostly dry weather is expected across the central and western U.S. The NWS 6- to 10-day outlook for October 31 – November 4 calls for near- to below-normal precipitation across much of the nation, with wetter-than-normal weather confined to the nation’s northern tier save for the Northwest. Colder-than-conditions are expected from the Plains to the Appalachians and Gulf Coast, while above-normal temperatures prevail in New England and the central and southern Pacific Coast into southern Texas.