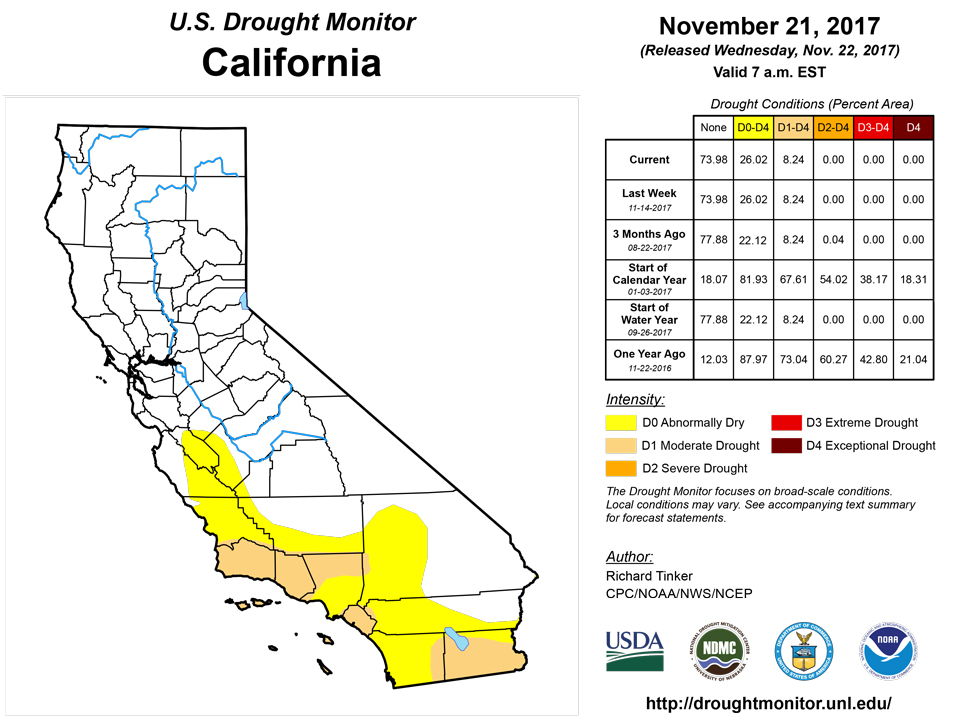 November 22, 2017 - With a few exceptions, dry weather dominated the contiguous 48 states this past week, particularly in areas already experiencing dryness and drought. Heavy precipitation fell on the orographically-favored areas in the West (specifically, the Sierra Nevada, windward slopes of the Cascades, and much of the coastline from northern California to the Canadian border). Anywhere from 4 to locally 12 inches doused much of these areas. Between 2 and 4 inches fell from central and eastern Illinois eastward across central and northern sections of Indian and Ohio, Michigan, and northwestern Pennsylvania, and similar amounts were more isolated across the higher elevations of the northern Idaho Panhandle, south-central Idaho, western Wyoming and adjacent areas, and a few scattered areas in northern sections of Nevada and Utah. Southern New England and eastern Maine recorded 1 to locally 3 inches of precipitation. Elsewhere - the vast majority of the country from the Great Basin and Southwest eastward across most of the Rockies and Plains, the Mississippi Valley, the Southeast, and the mid-Atlantic region – only a few tenths of an inch of precipitation was recorded, if any.

Abnormal dryness in northwestern Pennsylvania was eradicated by 1.5 to 3.0 inches of precipitation. No other changes were introduced. Light to locally moderate precipitation was not enough to change things in the Northeast, and while very little precipitation fell on the mid-Atlantic region, cooler weather kept significant deterioration at bay.

From northwestern Florida northward through southern Virginia, almost no precipitation fell, allowing dryness and drought to spread and intensify. Dryness expanded into southeastern Georgia, crept northward in central and west-central Georgia, developed in part of north-central Georgia, and pushed westward in central North Carolina. Moderate drought was introduced in the central Florida Peninsula and southwestern Georgia and part of south-central Georgia, and expanded slightly in the central Carolinas. Over the last 60 days, near or less than half of normal precipitation has fallen, with less than 25 percent of normal reported in scattered small areas from near the Georgia/Florida/Alabama border eastward through extreme southern South Carolina.

Negligible precipitation, if any, was observed in areas of dryness and drought from Missouri and Kansas southward through Texas and Louisiana. As a result, short-term dryness continued to intensify at a fairly rapid clip, particularly from central Arkansas and adjacent Oklahoma southward. D1 and D2 conditions expanded in southeastern Oklahoma, part of southern Arkansas, northeastern Texas, the northern half of Louisiana, and west-central Mississippi. More limited growth of D0 and a small D1 areas was assessed from central Kansas southward through central and western Texas. For the last 3 months, accumulated precipitation deficits exceed 8 inches in most areas across northeastern Texas, central and western Arkansas, southeastern Oklahoma, and southern Missouri; shortfalls one foot in a small part of west-central Arkansas.

The swath from central and northern Ohio westward through central Illinois was one of the few wet areas last week, with 2 to 4 inches of precipitation common. This brought an end to the small area of moderate drought in western Indiana, and eliminated  abnormal dryness in northeastern Ohio and part of central Illinois. Farther west, dryness and drought were unchanged in southeastern Iowa.

Very little precipitation fell on northern Minnesota, the Dakotas and the dry areas of Montana, but this is a dry time of the year climatologically for the region, so no substantial increase in precipitation deficits was noted, and last week’s depiction was not changed.

In the northern Intermountain West, light to moderate precipitation fell on the D0 areas in southern Idaho and interior Washington, with only scattered light amounts reported across interior Oregon; however, despite this week’s unimpressive precipitation, impacts resulting from below-normal precipitation have gradually eased over the past several weeks, and all abnormal dryness was removed from the region. Farther south, little or no precipitation fell on the Four Corners States and Southwest, as was the case in most of the other dry areas across the country. Drought evolves more slowly in this part of the country than in the climatologically wetter parts of the country, but some limited deterioration seemed appropriate in a few areas. Abnormal dryness was introduced in central Utah, leaving only the northwestern part of the state free from dryness. Farther east, moderate drought expanded into southwestern and west-central Colorado, east-central Utah, and the adjacent fringe of northwestern New Mexico.

An uneventful week kept areas of dryness and drought unchanged across Hawaii following the significant improvements introduced the prior week.

The next 5 days (November 22-26) look similar to this past week, with most of the contiguous 48 states expecting little if any precipitation. Marginal relief may come to northern Florida and southeastern Georgia, where up to 1.5 inches of precipitation are forecast, and similar amounts should moisten the dry areas of eastern Maine. Moderate precipitation is also possible in far northwestern Montana and adjacent Idaho, but for the rest of the country, including the vast majority of the Nation’s dry areas, little or no precipitation is anticipated. In addition, the dry weather may be exacerbated by well-above-normal temperatures from the Plains westward to the Pacific Coast. Temperatures are expected to average at least 9 degrees F above normal across the western half of the 48 states, reaching as high as 20 to 24 degrees F in central and northern sections of the Rockies and High Plains, as well as the central Intermountain West.

During the 6-10 day period (November 27- December 1), abnormally light precipitation once again looks to dominate the 48 states. Odds favor below-median precipitation in the Southwest, central and southern sections of the Rockies and High Plains, most of the Great Plains and Mississippi Valley from South Dakota and central Minnesota southward to the Gulf Coast, and throughout the Nation east of the Mississippi River, save part of the northwestern Great Lakes Region. Odds favor above-normal precipitation in North Dakota and Montana, which would bring some needed moisture into the broad areas of D2 and D3 covering much of those states. The warmth observed in the central and western U.S. is expected to spread eastward to cover the entire country west of the Appalachians, though the intensity of the abnormal warmth may modify.