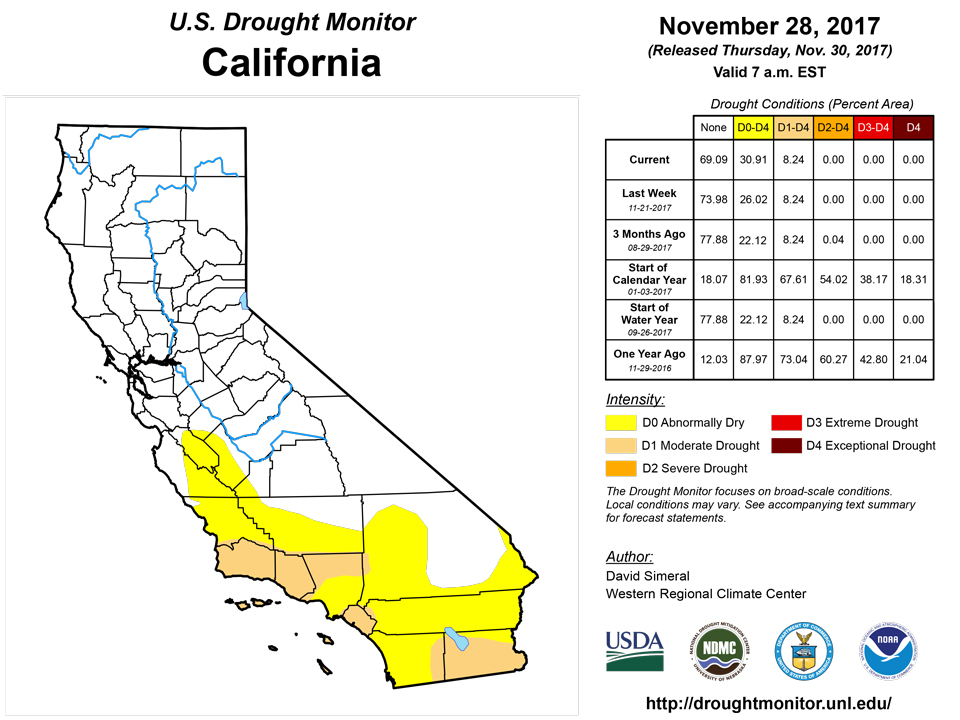 November 30, 2017 - This U.S. Drought Monitor week saw a series of storms impact the Pacific Northwest, northern California, and northern Rockies. The heaviest precipitation was observed across the Olympic Mountains and North Cascades of western Washington where precipitation accumulations (liquid) ranged from 4-to-12 inches. In the Puget Lowlands of western Washington, runoff from the storm event led to severe flooding on the Skagit River that peaked at 5 feet above flood stage on Friday. Elsewhere in the West, unseasonably warm temperatures were observed across parts of the region including record-breaking high temperatures reported across southern California, the Desert Southwest, western Great Basin, and along the Front Range of Colorado. In the Southwest, the warm and dry pattern of the past several months led to expansion of areas of moderate drought in Arizona, New Mexico, and Utah while drought-related conditions improved in western Montana. In the High Plains, conditions were very dry this week, and temperatures were well above normal across the entire region. In the South and Southern Plains, the overall dry pattern during the past 30-to-60 days led to expansion of areas of moderate-to-severe drought across portions of Arkansas, Louisiana, Mississippi, eastern Oklahoma, and eastern Texas. In the Mid-Atlantic states, short-term precipitation deficits during the past 30 days led to deterioration of conditions across portions of North Carolina and Virginia.

On this week’s map, minor changes occurred in northern New Jersey, northeastern Pennsylvania, and southeastern New York where the combination of short-term precipitation deficits and low streamflows led to expansion of areas of Abnormally Dry (D0). In eastern Maine and northeastern Massachusetts, areas of Abnormally Dry (D0) were removed. During the past week, the region was relatively dry with the exception of Upstate New York as well as coastal areas that received generally less than 1 inch (liquid) accumulations. Average temperatures across the region were slightly below normal (1-to-2 degrees) with the exception of western portions of New York and Pennsylvania where temperatures were 1-to-3 degrees above normal.

On this week’s map, short-term precipitation deficits during the past 30-to-60 days, and below normal streamflow activity led to expansion of areas of Moderate Drought (D1) in west-central Alabama, the Florida Panhandle, southeastern Georgia, Piedmont of North Carolina, and central South Carolina. Overall, the region was dry with the exception of northern Florida where rainfall accumulations ranged from 2-to-4 inches. For the past week, average temperatures were near to slightly below normal across the region with the greatest negative anomalies (2-to-4 degrees) observed in eastern portions of the Carolinas and western Alabama.

On this week’s map, conditions continued to deteriorate in the region as a result of short-term precipitation deficits, below normal streamflow activity, and low soil moisture. Areas of Moderate Drought (D1) expanded in Arkansas, Louisiana, Mississippi, and Oklahoma while areas of Severe Drought (D2) spread in northwestern Arkansas, southeastern Oklahoma, and northeastern Texas. An area of Extreme Drought (D3) was introduced in southwestern Arkansas where precipitation deficits (past 90 days) ranged from 10-to-12 inches. In this area, 28-day average streamflows are currently well below normal (1st to 9th percentile range). Furthermore, the North American Land Data Assimilation System (NLDAS) is showing total column soil moisture lower than the 5th percentile. In the eastern half of Texas, short-term precipitation deficits (3-to-5 inches) during the past 30-to-60 days led to expansion of areas of Abnormally Dry (D0) and Moderate Drought (D1). According to the USDA, topsoil moisture is currently rated as 75% short to very short in Oklahoma while Texas is rated 67% short to very short. Overall, the region was dry during the past week, and average temperatures were near to slightly below normal across Louisiana, Mississippi, and eastern Texas while above average temperatures (5-to-14 degrees) were observed in western portions of Oklahoma and Texas.


No changes were made on the map this week. Overall, the region was generally dry with the exception of some light snowfall activity in Upper Peninsula Michigan. Average temperatures for the week were above normal (2-to-14 degrees) across most of the region with the greatest positive anomalies observed in Iowa, Minnesota, and Missouri.

On this week’s map, conditions deteriorated in central and eastern Kansas as well as in western North Dakota. In North Dakota, areas of Moderate Drought (D1) and Severe Drought (D2) expanded in response to below normal precipitation during the past 30-to-60 days as well as reports of signs of negative impacts to the winter wheat crop. According to the USDA World Agricultural Outlook Board, winter wheat conditions are currently rated as 38% poor to very poor for South Dakota. In Kansas, scattered below normal streamflows and below normal precipitation during the past 30 days led to expansion of areas of Moderate Drought (D1) in south-central. During the past week, the region was dry and temperatures were well above average especially in western portions of the Dakotas where temperatures were 15-to-18 degrees above normal.

During the past week, the warm and dry pattern continued across the Southwest, southern Rockies, and eastern portions of the Intermountain West while northern California, western Oregon and Washington, and the northern Rockies were impacted by several storms that delivered locally heavy rainfall and mountain snow to the higher elevations. According to the Natural Resources Conservation Service SNOTEL network, snowpack conditions are above normal in the following areas: Cascades (Washington), Sawtooth Range (Idaho), northern Rockies (Montana/Wyoming), and portions of the central Sierra (California). Conversely, snowpack conditions were well below normal in the mountain ranges of the Arizona, western Colorado, eastern Nevada, New Mexico, and Oregon. On the map, areas of Moderate Drought (D1) expanded in central and northern Arizona, western Colorado, western New Mexico, and across Utah in response to short-term precipitation deficits (30-60 days), poor snowpack conditions, and anomalously warm temperatures. According to the USDA, California’s topsoil moisture is currently rated as 75% short to very short. During the past week, average temperatures were well above normal (5-to-18 degrees) across the region with numerous daily high temperature records broken from California to Colorado.

No changes were made on this week’s map in Alaska or Puerto Rico. In the Hawaiian Islands, one-category improvements were made in areas of Severe Drought (D2), Moderate Drought (D1), and Abnormally Dry (D0) on Kauai. On the windward side of the Big Island and leeward side of Kauai, 3-to-5 inch accumulations were observed this this past week, and average temperatures across the island chain were a few degrees below normal. In Alaska, the state was generally dry with the exception of Southeast Alaska where 1-to-2 inches of precipitation were observed. Average temperatures were below normal across much of the state with the exception of western Alaska and the North Slope that saw positive anomalies ranging from 4-to-14 degrees above normal during the past week.

The NWS WPC 7-Day Quantitative Precipitation Forecast (QPF) calls for liquid precipitation accumulations of 2-to-5 inches in western Washington and 1-to-2 inches across the Northern Rockies of Idaho and Montana. Accumulations of 0.5-to-1 are forecast for the central and southern Rockies. Accumulations of an inch are expected in the lower Midwest and northern portions of the South. The CPC 6–10-day outlook calls for a high probability of above-normal temperatures across the eastern half of the conterminous U.S. as well as in western Arizona, California, and western Nevada while below normal temperatures are expected in a swath extending from west Texas to eastern portions of the Pacific Northwest. In terms of precipitation, below normal precipitation is expected across the western third of the conterminous U.S. while a high probability of above normal precipitation is forecast for the eastern third of the U.S. and eastern portions of the Desert Southwest.