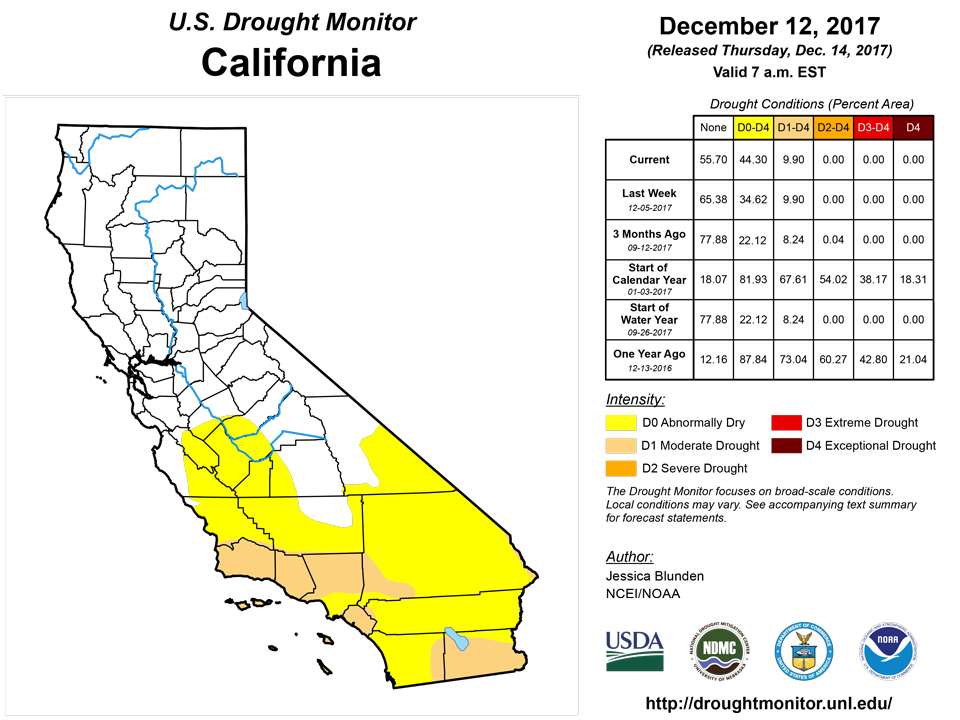 December 14, 2017 - Conditions were dry and windy across much of the western United States over this past drought week, December 5-12. Wildfires, fueled by strong Santa Ana winds, destroyed hundreds of structures and burned well over 100,000 acres, enhancing the state’s deadliest and costliest wildfire year on record. An unprecedented purple flag (wind) warning was posted on the 8th. Red flag warnings were posted from Colorado to Illinois on the 11th. Daily temperatures were above average across the western two-thirds of the U.S., particularly notable across the Southwest stretching into the High Plains. Snow fell across the South and Southeast, a rarity in many places, including southern Texas eastward into Georgia. The storm unexpectedly dumped more than a foot of snow in parts of northern Georgia and North Carolina, with at least several inches widely reported. The storm continued to track across the mid-Atlantic and Northeast, leaving several inches on the ground there as well. Temperatures were as much as 15-25°F below average from parts of the Southern Plains to the Gulf Coast. Overall, with respect to drought, continued lack of moisture led to more degradation across parts of the West, High Plains, Midwest, and the South. A few areas improved, mainly in some of the far southern areas, where plentiful precipitation fell this past week.

Temperatures were near to above average over the past week, with the northern areas 2-6°F above average. Continuing a pattern over the past few months, much of the Mid-Atlantic into southern New England had below-average precipitation, in many places less than 50% of what is typically received in the given period. Some precipitation did fall over the past week over the region and so most of the region remained in its current status. However, with streamflow declining, eastern Pennsylvania saw an expansion of abnormally dry conditions, which now cover Allentown and Philadelphia.

Most of the swath of abnormally dry and moderate drought conditions stretching from Virginia southward to the Florida panhandle, Alabama, and southern Mississippi received adequate rainfall this week. Several areas from Georgia to Virginia received 2-3 inches of precipitation. Despite the short-term benefits, longer-term dry conditions remain. For example, large areas in Virginia have still received just 25% or less of average rainfall over the past 1-3 months. Consistent precipitation or another large event is needed to improve conditions. Thus, no changes were made across North Carolina, South Carolina, and Virginia. Conditions improved across parts of northern Florida and southern Georgia, while northern Georgia saw no change.

While it was dry across much of the South, some southern regions saw welcome precipitation around the 7th to the 8th. Snow fell across south Texas. Corpus Christi recorded snow for just its ninth day on record, with 1-3 inches falling around the area. Drought conditions improved from southern Texas to southern Mississippi. However, it remained dry around the rest of the South, leading to the expansion of abnormally dry (D0) conditions across the Texas Panhandle. Moderate drought also spread westward across the Oklahoma Panhandle. Since October 6, Boise City has received a total of only 0.02 inch of precipitation. Normal for this period is about 2 inches. Numerous stations in the Panhandle reported no precipitation in the past two months. The lack of precipitation led to degraded conditions across other parts of central and northern Texas, parts of Oklahoma, northern Louisiana, and eastern and southern Arkansas. The area of extreme drought (D3) that was mainly centered in Arkansas last week creeped west into southeast Oklahoma, eastern Texas, northwest Louisiana, and farther east in Arkansas. Shreveport, Louisiana, in Caddo Parish, observed its fourth driest fall on record, with only 19% of normal rainfall recorded in the last three and a half months. Additionally, extreme drought (D3) was introduced to several counties in north central Arkansas and south central Missouri. Severe (D2) and extreme drought now encompass the vast majority of Arkansas. Jonesboro (Craighead County), in northeastern Arkansas, reported 2.66 inches of precipitation in the past 90 days, just 20% of normal and its driest such period on record. To the east, abnormally dry conditions were introduced in western and northern Tennessee.

Dry conditions remained in Missouri, leading to an expansion of abnormally dry (D0) conditions in the west central portion of the state. In the south central region, a small area around Howell County deteriorated from severe (D2) to extreme (D3) drought. Several impacts were reported across the severe drought regions in Missouri. For  example, producers are feeding hay due to minimal fall grass growth and little to no hay cuttings; some producers are moving cattle or hauling water because of low or empty ponds, or little to no flow in creeks and springs (many are saying it’s worse than 2012); there have been failures of fall sown crops germinating, and annuals such as oats and turnips have not produced well; wheat is not germinating properly. Dry conditions over the past couple of months led to the introduction of abnormally dry conditions across all of southern Kentucky and part of southern Illinois. The abnormally dry conditions in Iowa crept northeastward into the northwest corner of Illinois and into north central Iowa. It has been very dry since early to mid-October, resulting in dry surface conditions.

Most of the region had above-average temperatures and little to no rainfall. The lack of precipitation continues a pattern of dryness in the region over at least the past couple of months. Lincoln, Nebraska, has received only 0.08 inch of precipitation since October 15, its driest such period on record. Abnormally dry conditions (D0) expanded greatly over Colorado into western Kansas, and northeastward into Nebraska. Moderate drought (D1) deteriorated to extreme drought (D2) in south central Kansas, adjoining the already extreme drought condition in north central Oklahoma. Abnormally dry conditions were expanded across the remainder of southeastern Kansas. Moisture there is less than half of average. Soil moisture levels are down and surface water supplies (stock ponds) are shrinking.

In November, California’s South Coast climate division reported its second and third highest monthly minimum and average temperatures, respectively, and an average of just 0.10 inch of rainfall (average is 1.51 inches for that period). This heat and dryness continued into early December. Fueled by these conditions and Santa Ana winds up to 80 mph that resulted in numerous Red Flag Warnings. These drought and weather conditions were also a contributing factor in the explosive growth of the fires that started in Southern California the first week of December. Inland, along the southeastern California/Nevada border region, abnormally dry conditions (D0) were extended northwestward into southern Inyo County (CA) and most of southern and central Nye County (NV). It has been be extremely dry across the Mojave Desert this fall. For the first time since records began in 1937, Las Vegas reported no measurable rainfall in October and November, and was on its 89th consecutive day without rain as of the writing of this report. Several other areas were also reporting no rainfall for at least two months: Death Valley (86 days); Barstow-Daggett (69 days); Needles (72 days); Kingman (67 days). In Utah, the continuing dry conditions warranted degrading the remaining abnormally dry conditions in the southeastern portion of the state to moderate drought (D1). In New Mexico, the lack of precipitation over the past two months has taken a toll on soil moisture at 2-8 inch depths at most monitoring sites. Abnormally dry conditions spread across most of the eastern part of the state, save a small area in the southeastern corner.

No changes were made to in Alaska, Hawaii, or Puerto Rico this week.

The precipitation pattern across the contiguous United States over the next week appears to be somewhat similar to the pattern seen over this past week: dryness from California stretching over to eastern Texas and Kansas. The far Pacific Northwest is poised to see heavy precipitation and some precipitation is expected over other parts of the Northwest and the High Plains. Most of the East Coast should also see some precipitation, with the heaviest amounts likely in New England. Looking further ahead, the Climate Prediction Center’s (CPC) 6-10-day forecast (December 19-23) indicates probable dryness across the western U.S., and parts of the Midwest, Mid-Atlantic, and Florida. Temperatures are expected to be above normal during this time across most of the contiguous U.S.; however, New England may be colder than average. Wet conditions are expected across the northern tier of the U.S. and in the Southeast, from Mississippi to Georgia. Looking even further out, CPC’s 8-14 day forecast (December 21-27) suggests dryness will prevail across the western U.S. and southern Florida. Wetness is projected across much of the northern U.S. most of the High Plains, and much of the South and Southeast. Warmer-than-average temperatures are expected across most of the Southwest and the Southeast, while cooler-than-average conditions may occur across most of the rest of the contiguous U.S.