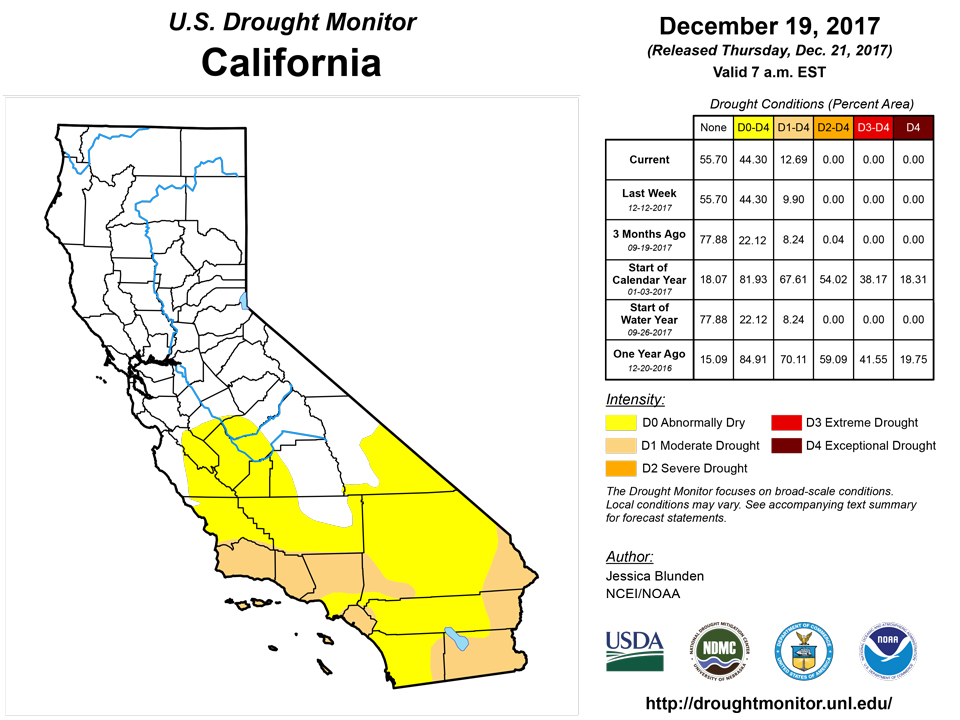 December 21, 2017 - Snow fell across most of the Northeast, but it was dry across most of the contiguous United States, with much of the country receiving less than 0.10 inch of precipitation and many areas receiving nothing at all. Part of the South, from eastern Texas to western Alabama, did receive more than an inch of rain, with locally heavier amounts, which helped improve dry conditions. Temperatures were generally below average across the eastern third of the U.S. and above average across most of the western two-thirds. Warmth was notable in eastern Montana and the Dakotas where temperatures were up to 20°F above normal. It was around 5-10°F above normal in the central U.S., an area that continued to see dry conditions this past week. In general, drought expanded across parts of the West, Southern Plains, Midwest, Southeast, and Mid-Atlantic and contracted across part of the South.

While snow fell across parts of the Northeast, most of the Mid-Atlantic to southern New England region received less than 50 percent of its typical precipitation for the week. Below-average temperatures accompanied the dryness. Abnormally dry (D0) conditions expanded slightly to the west in eastern Pennsylvania and southeastern New York and southeastward across northern New Jersey. Moderate drought (D1) was introduced to a small region of eastern Pennsylvania while another D1 area in Maryland was extended south slightly into Virginia. Stream flows were low in these areas.

Dry conditions prevailed across the Southeast this past week, with most of the swath from Virginia through Florida receiving less than 0.1 inch of precipitation, which is less than five percent of typical precipitation for this time of year. Moderate drought (D1) conditions in Maryland were extended south slightly into northeastern Virginia. Abnormally dry conditions (D0) and moderate drought continued to creep west toward the foothills of North Carolina. Three-month precipitation deficits of 4 to 6 inches were reported in North Carolina, along with stream flows dropping into much-below-normal levels in both the short-term and long-term. Many lakes across the Piedmont have been slowly declining without the upstream precipitation that was fairly reliable during the fall. Additionally, small grains planted within the past 45 days have failed to germinate—another sign of the sparseness of recent rainfall. In Georgia, moderate drought expanded slightly in Stewart County along the Alabama/Georgia border, and in Irwin, Ben Hill, Coffee, and Jeff Davis Counties in central Georgia. Parts of Alabama saw a bit more rain this week, but it was still well below average. In east central and northern Alabama, abnormally dry conditions spread eastward from Clay, Talladega, and St. Clair Counties across the Georgia border, and also through Marshall County. Moderate drought expanded into southern and eastern Marion County. In Florida, while no changes were made on the drought map this week, there were reports that pasture quality continued a seasonal decline. Reporters in Holmes County in the Panhandle noted that winter grazing came up and then died this week due to the lack of rain.

For the first time in over 3 and 1/2 months, a widespread soaking rain fell over large parts of the region this week, where 1 to 2+ inches of rain was received in places, including over the extreme drought (D3) area around the Texas / Louisiana / Arkansas border, which shrank considerably. Deeper moisture returning northward from the Gulf of Mexico fueled the development of scattered thunderstorms, along with locally heavy rainfall at times. The heaviest precipitation fell over southern and eastern Texas and southern Louisiana. These regions saw a one-category improvement with respect to current drought conditions. The rain was enough to improve D0 to normal conditions in parts of southern Mississippi, Louisiana, and Texas. Unfortunately, that rain did not extend to northern Texas or Oklahoma, where continued dryness led to deterioration in several areas, including Foard County just south of the Texas Panhandle, where extreme drought developed.

Dryness continued across the Midwest throughout this drought week. In Illinois, abnormally dry (D0) and moderate drought (D1) conditions expanded across the southern and central parts of the state, where soil moisture was slowly but steadily declining as the precipitation deficits increase, stream flows were continuing to decline, and there were reports that some stock ponds and rural wells were low. Over the past two months, there were widespread reports of 2-4 inch deficits west of US-51, with  more than 4 inch deficits from Springfield stretching to the west and south. Abnormally dry conditions spread north and south in central Iowa and in the eastern portion of the state. Moderate drought extended farther in south central and eastern IA. Statewide average precipitation for December-to-date was only 0.09 inch, following the November average of 0.43 inch in November, which was the lowest statewide average for any calendar month since November 2007. The lack of rain also led to the expansion of D0 across the remainder of eastern Kansas into northern Missouri. Aside from a bit of sleet and drizzle, Kentucky was also dry again this week. Abnormally dry conditions also spread northward over the state, especially notable in the eastern half.

Light precipitation spread across the northern-tier states as a surface front passed through southern Canada and the Northern High Plains. However, the region mostly remained dry during the week. Abnormally dry conditions continued to expand across western Nebraska, reaching into southeastern Wyoming. The entire state of Kansas was now experiencing some level of abnormal dryness or drought.

Heavy snow fell over the Cascades and, after an extended period of dry weather, widespread accumulating snow fell over the central and northern Rockies. However, other areas continued their dry pattern. With below-average precipitation, abnormally dry conditions spread farther west and northwestward in northern Utah. The dry pattern across the Intermountain West region continued to persist. Snowpack in southern Colorado has dropped below 50% of normal for the season to date, and snowpack in southern Utah, Arizona, and New Mexico was less than 20% of normal. Across the western slopes of Colorado and southern Utah, the dry conditions were a continuation of a trend since early in the summer, leading to the introduction of severe drought (D2) from the southern Wasatch Range and La Sal Range as well as the southern portion of the lower elevation in between. Moderate drought (D1) expanded eastward in western Colorado where there was generally less than 60% of normal snowpack for the cold season to date and temperatures have been much warmer than normal in November and early December. Additionally, abnormally dry conditions expanded in eastern Moffat County and Routt County, and in Summit County and southern Grand County. Snowpack for the water year to date was in the 10th percentile or below at Summit Ranch, Copper Mountain, and Berthoud Summit (Colorado). The footprint of moderate drought expanded west across La Paz County in southwestern Arizona into eastern San Bernardino and Riverside Counties in California.

No changes were made to the depiction in Alaska or Puerto Rico this week. In Hawaii, December rainfall has been deficient in many areas, especially in the western half of the state. This largely stalled the drought recovery that started in November. Abnormally dry (D0) conditions expanded across all of Lanai and the southwestern halves of Kauai and Oahu Islands.

Over the next week, beginning Tuesday December 19, a good deal of much needed precipitation is forecast to fall across much of the South and the eastern United States. A swath from eastern Texas to North Carolina, most of Kentucky, and southern Virginia are expected to receive between two and six inches of precipitation. Heavy precipitation is also forecast for the Pacific Northwest, northern Idaho, western Montana, and parts of the Northeast. Dry conditions will likely continue across the Southwest and parts of the southern Plains, where drought conditions already prevailed. Warm temperatures in the South at the beginning of the week will be replaced by cold air sliding down from the north. Looking further ahead at NOAA’s Climate Prediction Center (CPC) 6-10 day Outlook (December 24-28), the probability of dry conditions are highest in the Northwest and Midwest, while wet conditions may occur over New Mexico, southeastern Colorado, and Texas, and stretching across the much of the South and along the East Coast. During this period, below-average temperatures are expected over nearly the entire contiguous U.S., except for parts of the Mid Atlantic along the coast and the Southeast, including Florida. Looking two weeks out (December 26 - January 1), the cold temperatures are expected to continue, except in Florida and the Southwest. The probability of above-average precipitation is highest over part of Montana and Texas, while below-average precipitation is most likely in the Northwest and much of the northern U.S. from the Northeast to the eastern Dakotas.