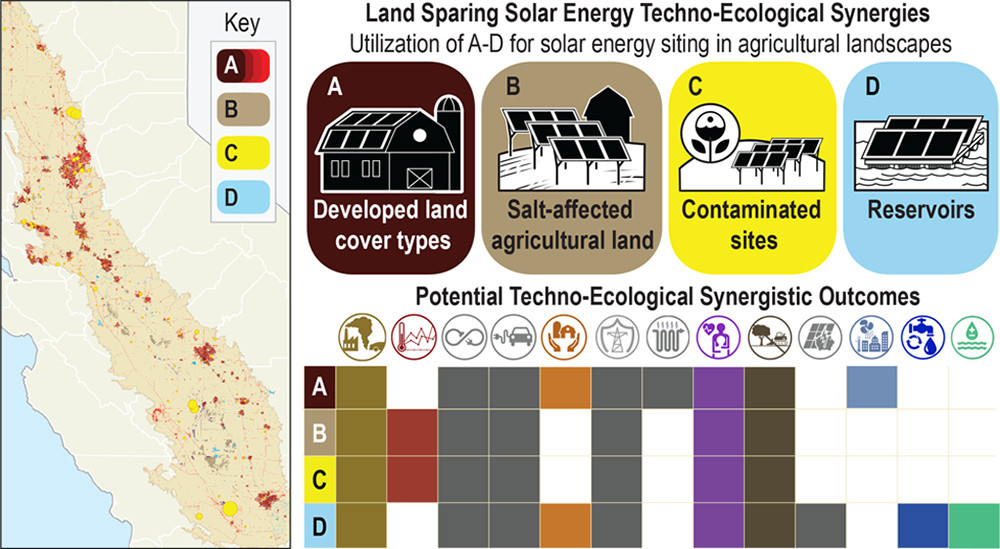 January 7, 2018 - By Christine Souza - Plenty of places exist to locate new solar energy facilities without developing them on prime agricultural land, according to a team of University of California researchers who analyzed potential development of solar installations on unconventional sites in the Central Valley.

In the study, "Land Sparing Opportunities for Solar Energy Development in Agricultural Landscapes: A Case Study of the Great Central Valley," researchers found that the valley contains about 8,400 square kilometers—roughly 3,200 square miles—of land and space on agricultural buildings on which solar panels could be built, rather than on farmland.

Michael Allen, a distinguished professor emeritus of plant pathology and biology at UC Riverside and director of the university's Center for Conservation Biology, said many existing solar facilities are built in unsuitable areas where they encroach on natural or agricultural lands already under threat from urban sprawl.

"When a piece of land is developed for a solar installation, it is very unlikely to be reverted into agricultural land, even when the lease to the solar company eventually runs out," Allen said. "That's because flattening and compacting the land, as well as the long-term application of herbicides to keep the site clear of weeds, spoils the land for future farming. For this reason, it is important that we explore alternative sites for new developments as the industry continues to grow."

Chris Scheuring, California Farm Bureau Federation managing counsel, said CFBF recognizes renewable energy as a public good, but emphasized, "There is an equal public interest in protecting our precious stock of prime soils—our agricultural lands that we need to grow food and fiber for people."

The goal, Scheuring said, is to encourage renewable energy while at the same time retaining California's stock of productive agricultural soils.

"To the extent that this study shows that we in California can do solar without having to pave over farmland, that is good policy," he said.

As part of the study, researchers explored the development of solar installations on a variety of sites that, if used for solar, could spare prime agricultural and natural spaces and ease competition among farmers, conservationists and energy companies.

Researchers evaluated developed areas within agricultural landscapes such as rooftops, transportation corridors and parking lots; land too salty for crops to grow; reclaimed areas that were previously contaminated; and reservoirs and irrigation channels that could accommodate floating solar panels known as floatovoltaics.

Combining those underused sites for solar—which would be the equivalent area of 1.5 million football fields—the team concluded that solar energy from those spaces alone could exceed the 2025 electricity demands for California by up to 13 times.

"The study highlights the wealth of sites for solar energy generation that don't conflict with farmland or protected areas," said Rebecca Hernandez, assistant professor of earth system science and ecology at UC Davis. "Since farming is an incredibly energy-intensive industry, the land-sparing sites we identified could provide a win-win situation for both farmers who need more energy and the energy providers that wish to serve them."

A number of agricultural businesses in California have invested in renewable energy, including rooftop solar panels on fruit and vegetable packinghouses, nut processing plants and other facilities.

Scheuring said that type of solar development is consistent with Farm Bureau policy that encourages renewable-energy projects to be "subordinate to the agricultural operation and should not permanently impede or reduce the productive agricultural capacity of the land for future uses."

In the era of looming land scarcity, Hernandez said, "We need to look at underused spaces."

"This paper provides a menu of sorts for farmers, agricultural stakeholders and energy developers to think about energy projects on spaces that don't require us to lose prime agricultural and natural lands, which are becoming increasingly limited," she said.

Karen Norene Mills, CFBF associate counsel and director of public utilities, said farmland remains under "significant pressure" from solar-power development, in part because of its relatively low cost and beneficial tax treatment compared to other types of renewable-energy generation.

Mills noted that these aspects of solar development "continue to overshadow the implications from the impacts on balancing usage on the transmission grid and the effect the large amount of solar generation has had on how customers are charged for electricity on time-of-use rates. "

Meanwhile, she said, "electricity-producing biomass plants, which provide direct benefits to urban and rural communities, continue to close throughout the state due to lack of contracts."

"The questions of how much new electric generation is needed, what type is appropriate for system needs and where it should be sited continue to challenge the industry," Mills said, "especially in light of projections that some utilities may reach their 50 percent mandate for renewable-energy production by 2020."

The UC study, written by Allen, Hernandez and lead author Madison Hoffacker, a UC Davis graduate student, was published Dec. 19 in the journal Environmental Science and Technology, and may be read at pubs.acs.org/doi/10.1021/acs.est.7b05110.