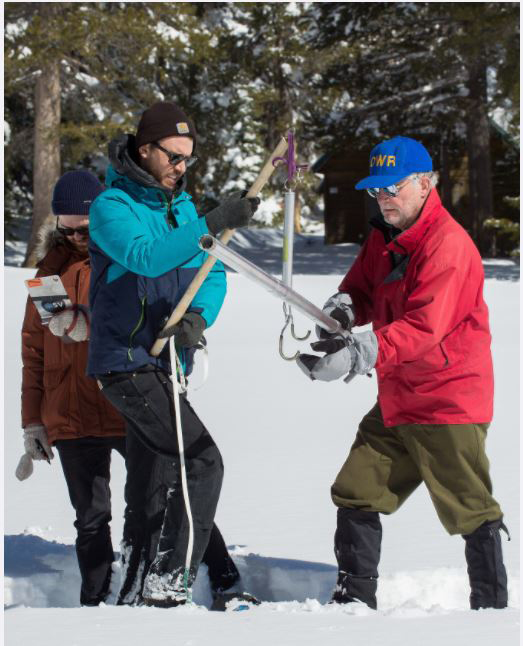 March 6, 2018 - Monday’s snow survey at Phillips Station tells a more positive story than it did before the recent storm, but totals are still well below average. Despite the recent late-winter storm that brought much-needed snow to the Sierra Nevada, the snow water equivalent (SWE) is 9.4 inches, which is 39 percent of normal for early March.

“California has unquestionably experienced a dry winter this year, with a near-record dry February,” said DWR Director Karla Nemeth. “While we’re happy to kick off March with this healthy storm, the variability of this winter’s weather patterns underscores the importance of continued conservation and the ongoing need to strengthen California’s water supply reliability for our people, our economy, and our environment.”

The snow survey conducted Monday by Frank Gehrke, chief of the California Cooperative Snow Surveys Program, was the second measurement at Phillips Station for this snow survey period. On February 28, Gehrke conducted the official snow survey of record, which found a SWE of 1.7 inches, or just 7 percent of average for that time of year as recorded since 1964. Given the forecasted storm, Gehrke conducted a second measurement on March 5 to record its impact, which yielded a 32 percentage-point increase in SWE over the previous week.

SWE is the amount of water contained within the snowpack. The snowpack – often called California’s “frozen reservoir “– normally provides about a third of the water for California’s farms and communities as it melts in the spring and summer and fills reservoirs and rivers.

“As indicated by the increase in snow depth and water content from last week to today, this recent storm provided a much-needed boost to our snowpack,” said Gehrke. “Today’s measurements are greater than what we found last week, but not enough to bring the state up to an average year.”

In addition to the manual surveys conducted at Phillips, DWR also logs electronic readings from 103 stations scattered throughout the Sierra. Electronic measurements indicate the SWE of the northern Sierra snowpack is 7.4 inches, 30 percent of the multi-decade average for today’s date. The central and southern Sierra readings are 11.5 inches (43 percent of average) and 8.7 inches (37 percent of average) respectively. Statewide, the snowpack’s SWE is 9.5 inches, or 37 percent of the March 5 average. Electronic snowpack readings are available on the Internet at: http://bit.ly/2rVa84a

The Phillips snow course, near the intersection of Highway 50 and Sierra-at-Tahoe Road, is one of 260 that are surveyed manually throughout the winter. Manual measurements augment the electronic readings from the snow pillows in the Sierra Nevada that provide a current snapshot of the water content in the snowpack.

Results of the readings by DWR at Phillips Station and Tamarack Flat are as follows: