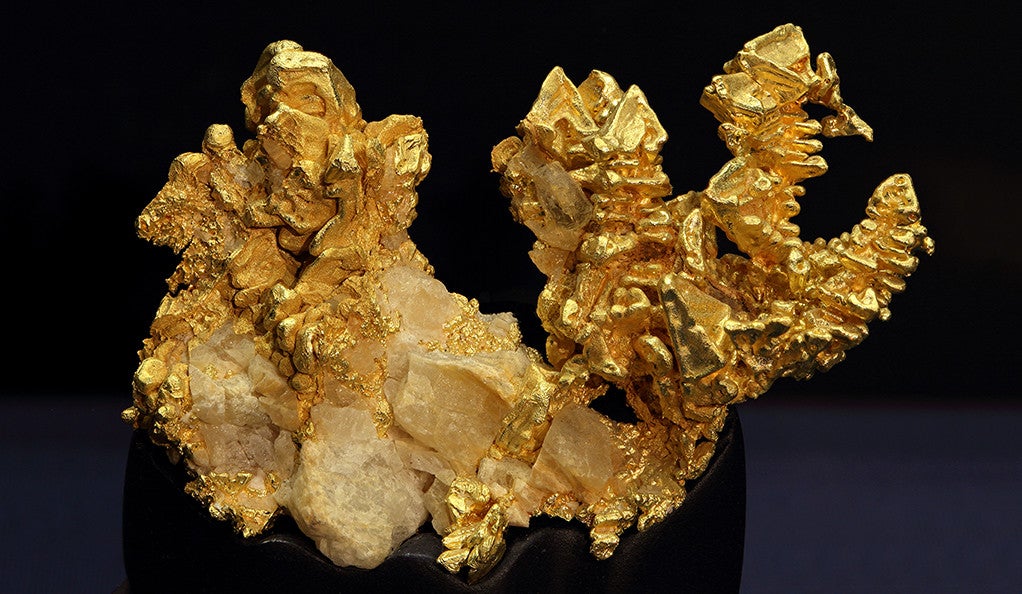 This specimen of stacked gold and sharp octahedral crystals on quartz is one of 23 examples of California gold going on display at Yale’s Peabody Museum of Natural History. (Photo credit: Harold Moritz)

April 17, 2018 - By Mike Cummings - The Yale Peabody Museum of Natural History is having a gold rush — one in which prospectors can gaze at glittering specimens of radiating golden leaves.

An exhibit opened at the museum on Saturday, April 14, showcasing 23 pieces of California gold, including unusually large examples as well as smaller ones featuring extremely rare crystallographic forms. 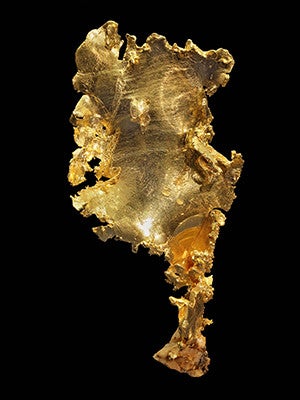 “This collection is incredible,” said Richard Kissel, the Peabody’s director of exhibitions and public programs. “The gold specimens on view are of superior quality — impressive physically and stunning aesthetically. The exhibit highlights the specimens’ beauty while offering insight into the history and science of gold mining.”

Several of the specimens on display resemble gilded coral formations: Leaves of gold overlap, intersect, and form jagged branches. The largest specimen measures about a foot across. Most were mined over the past 25 years, although two specimens of crystallized gold were mined in the 1850s during the California Gold Rush.

“This is one of the finest collections of gold specimens ever put on display anywhere in the world,” said Jay Ague, the Peabody’s curator-in-charge of mineralogy and meteoritics.

The exhibit also features a collection of historical instruments and artifacts related to gold mining in California, including a mining pan filled with gold dust, a balance for weighing specimens, an instrument for measuring the velocity of air in mines to ensure proper ventilation, a field chemical lab called a “blowpipe kit,” and a silver candlestick decorated with mining-related symbols that miners used for illumination while underground. 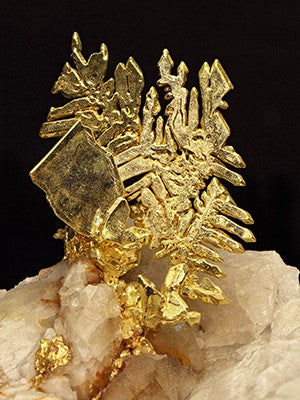 The gold specimens and artifacts are on loan to the Peabody from The Mineral Trust. The collection was on display for many years at the American Museum of Natural History in New York City.

“We strive to create experiences for our guests, from students to seniors, that enhance their appreciation of the beauty found in nature and piques their interest in the science and history of the spectacular specimens on view,” Kissel said. “We’re grateful to The Mineral Trust for providing this opportunity to share one of the world’s greatest collections of California gold.”

The exhibit provides an opportunity to recall a Yale connection to the Gold Rush: Seven years before gold was discovered in the American River at Sutter’s Mill, Yale professor James Dwight Dana had completed a tour of California’s Sacramento Valley. A pioneering geologist and mineralogist, Dana identified the region as a potential source of gold, remarking that the rocks there “resemble in many parts the gold bearing rocks of other regions: but the gold, if any there be, remains to be discovered.”
Source: Yale