October 31, 2018 - By Christine Souza - A multi-year drought, then the second-wettest year on record, then another dry year: That's the recent history of precipitation in California. One month into the new water 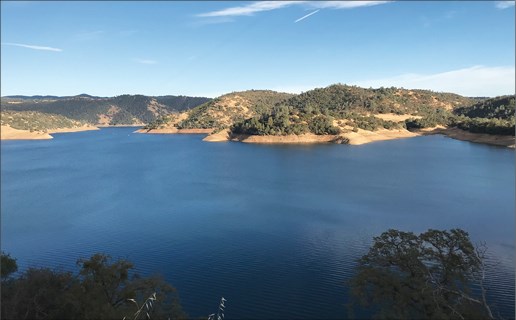 (Left) New Melones Reservoir on the Stanislaus River stands at 130 percent of average water storage for this time of year, and most other reservoirs in the state hold near- or above-average supplies. The first month of the new water year has brought little precipitation to California. State water managers say November, December and January typically produce the most snowpack and water supply.
Photo/Dave Kranz

"Everybody just needs to be prepared, because it might be a wet year," Shoemaker said. "Every year, even in a lot of our driest years, we get these huge atmospheric-river storms that can cause flooding; that is the nature of the weather here. Californians need to be prepared for either extreme, and this year there's no clear indicator on whether it is going to be a wet or a dry year for the state."

Though it's early in the season and most reservoirs are storing near- or above-average amounts of water, farmers would prefer some added certainty as they develop planting schedules and order supplies.

Fresno County-based Woolf Farming buys water from the Westlands Water District, which is supplied through the federal Central Valley Project. Daniel Hartwig, the farm's resource manager, said the farm is "bedding everything up as though we're going to be able to plant as much as possible."

"What we've run into is we don't get the water allocation number until it is too late to plant anything extra," he said. "This year, we're doing all our land prep to be ahead of the game and if we get an allocation number earlier, maybe we can plant more acreage. I think it has to be this way, just given the way the water world is in the last five or 10 years."

The uncertainty of a late water allocation, Hartwig said, is "really problematic."

"It really is quite difficult," he said. "You are shooting for the middle (allocation figure) and hope you can get more seed if there is more water available, and you are watching the weather and trying to read those tea leaves and talking to everybody that you can in that water world to get a better sense."

At Woolf Farming, a diversified operation of permanent and row crops, Hartwig said some crops have been chosen to add additional flexibility in case the water allocation does increase.

"We've been using cotton as our 'flex' crop because it has a later planting date and it's planted with seed. We build our map based on different allocations, so that tells us how many acres we can plant—at 5 percent, 10 percent increments—of each crop," he said, adding this strategy doesn't work with tomatoes, which are planted from transplants that require 60 days in the greenhouse.

Even though October has produced little, if anything, in the way of precipitation, California Department of Water Resources spokesman Chris Orrock said December, January and February represent the big producing months for snowpack and water supply.

"We never know what is going to happen long-term in California weather," Orrock said. "We went from historic precipitation in 2016-17 to below- average precipitation the following year. In our snow surveys, we went from a field that had a 9-foot depth (in water year 2017), to only two patches of snow. Everything is constantly changing, and we need to adapt to that and make conservation a way of life."

Mike Wade, executive director of the California Farm Water Coalition, noted that water-year types during the past 75 years show plenty of variability, with a few consecutive wet years interrupted by dry years. Despite the historic variability, Wade said, wet weather during 2017 filled many reservoirs, which helped the state during the below-average 2018 water year.

Shasta Reservoir, however, holds a little less water than it typically would at this time of year, at 84 percent of normal, Wade said, because the reservoir is used for more cold-water pool releases to benefit fish. Raising Shasta Dam by 18.5 feet, which is being discussed, would increase the reservoir's storage capacity by 14 percent, or 634,000 acre-feet.

Such proposed infrastructure improvements could be aided by a provision in federal water legislation signed by President Trump last week. Called America's Water Infrastructure Act of 2018, the bill includes a provision from Rep. Jeff Denham, R-Turlock, which provides financing for water projects throughout the West.

During the bill-signing ceremony at the White House, Denham said the bill "will actually have the upfront financing so we can start building Shasta, Temperance Flat and Sites, some of these big reservoirs that had been on the drawing board for decades now."

Along with a variety of water quality, supply and flood-control projects, the omnibus bill included $10 million annually for four years to implement drought-relief measures for farmers in the Klamath Basin.