September 20, 2019 - By Jeannette E. Warnert - The USDA has announced it will allow the release of a weevil (Ceratapion basicorne) in the United States to help control yellow starthistle, an invasive weed found in 40 of the lower 48 states, reported Capital Public Radio. The weevils will initially be released in California.

Ceratapion basicorne is native to Eurasia, the same area where yellow starthistle originated. Yellow starthistle is thought to have been introduced into California from Chile during the Gold Rush. The weed readily took hold in California valleys and foothills, thriving in areas where the soil has been disturbed by animals grazing, road construction and wildland firebreaks. Today, yellow starthistle is a very common sight in vacant lots and fields, along roadsides and trails, in pastures and ranch lands, and in parks, open-space preserves and natural areas.

"It's not very palatable to any livestock, especially once it's started to flower . . . . Often times, the other grasses and more palatable plants are grazed and the starthistle persists and is sort of the only thing left,” he said.

Hanson says yellow starthistle can be managed on a small scale with chemicals, but that method just doesn't work with the scale of infestation in the state.

“It's difficult to control economically on the millions and millions of acres of rangelands or non agricultural lands that are sort of minimally managed,” he said.

The USDA's environmental assessment of the weevil found no significant impact of its release, besides helping to control yellow starthistle infestations. 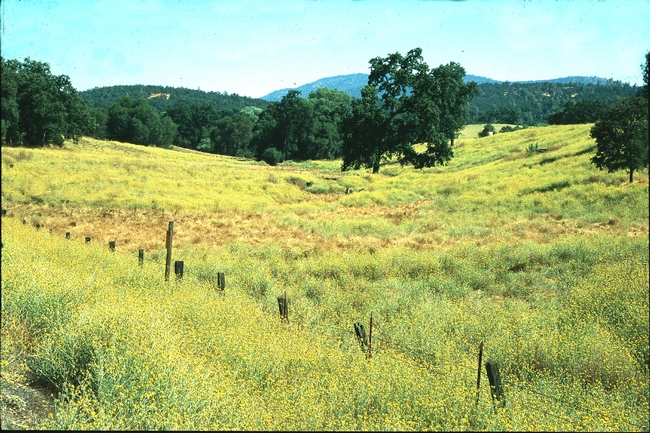