October 16, 2019 - MERCED, Calif.— Merced College will celebrate the completion of the important first phase of a campus entrance makeover by raising the American Flag at its new 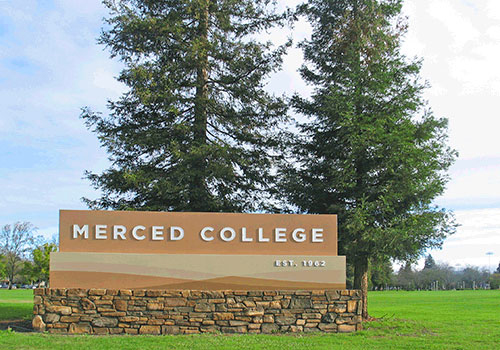 The District will celebrate a new era for the 67-year old campus with the ceremony at the newly enhanced entrance on Community College Drive starting at 5 p.m.

“This project was made possible by a generous donation from the Toney Family as well as other members of our community.  It was spearheaded by Chuck Fennessy who is a former veteran and long-time member of the Merced College Foundation.  Without Chuck’s tireless advocacy, I’m not sure this project would have gotten built so soon” said Merced College Foundation President, Joe Doyland. “I can’t remember a Foundation meeting over the last 5 years where Mr. Fennessy didn’t get up and rally to have those flags moved to a prominent space on campus.  He knew our veteran students deserved better and now his dream is a reality.”

“Raising the American flag for the first time, you can only do it once and it’s a dedication ceremony,” said Mark Grossi, one of the leaders with the American Legion Riders Post 83. “We have a passion for continuing the platform of properly raising the flag.”

Designed by Darden Architects in Fresno, the new area is situated near the 1st Lt. Peter J. Gallo Veterans Resource Center and the southwest lawn. There Old Glory is flanked by flags of the State of California and Merced College. The area also includes a new Merced College sign with the school’s logo imprinted in concrete directly in front of it.

The new entry was officially completed in late August as Phase 1 of the Merced College Plaza Project. The goal of the Plaza Project is to add an impressive welcoming space on campus for students, staff and visitors.

The original flag pole lived in front of the campus Administration Building, but surrounding trees eventually grew too large and began obscuring the pole and the flag.

Merced College relocated the flagpole to make it the focal point of the new plaza and to create a unified space near the southwest lawn where the District lays out the Field of Honor every November for Veterans Day.

The seventh annual Field of Honor, which honors local servicemen and women and first responders who died in service of this country, will be held Nov. 9-16.

The start date for Phase 2 of the Plaza Project is still to be determined, but it will add dozens of shade trees and seating throughout the plaza.
Source: Merced College