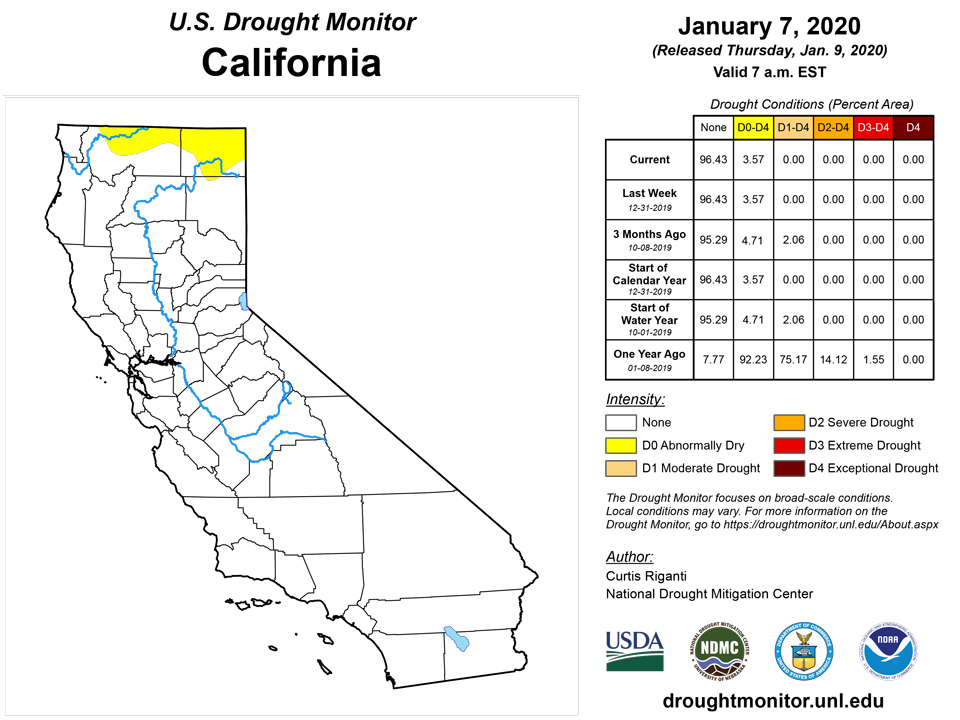 January 9, 2020 - Over the past week, primarily light to moderate precipitation fell from east Texas northeast through New England. Heavier precipitation amounts of 2 to 6 inches were embedded within the larger precipitation swath, affecting areas from southwest Louisiana to the southern Appalachian Mountains. Heavy precipitation amounts, including mountain snow, fell in the Pacific Northwest and in the central and northern Rocky Mountains. Warmer than normal temperatures also covered most of the continental U.S., with the warmest conditions (compared to normal) taking place in the northern states. In the West, many areas that received significant mountain snow in the past few weeks saw an improvement in drought conditions, while areas that missed out on the snow or still had significant precipitation deficits did not see improvements to their drought depiction. Improvements or degradations in conditions east of the Rocky Mountains were primarily in response to significant precipitation occurring, or lack thereof, over the past several weeks. Degradations made in parts of central and southern Texas also occurred due to high evaporative demand and the associated negative impacts on soil moisture. For more details on changes to this week’s U.S. Drought Monitor depiction, please see the regional paragraphs below.

Widespread light to moderate precipitation fell across the Northeast over the past week, with some areas receiving over a half inch of precipitation. Warmer than normal temperatures were also common across the region, with most locations between 5 and 15 degrees above normal for the week. Aside from a small area of abnormal dryness in Delaware and Maryland, the region remained free of abnormal dryness or drought this week.

Widespread moderate to heavy precipitation occurred in the Southeast this week, where amounts ranged from a half inch to about 4 inches, with the exceptions of the southern Florida Peninsula and coastal portions of South Carolina and North Carolina. Temperatures from 5 to 10 degrees above normal were also common across the region (with the exception of the Florida Peninsula) this week. Due to recent precipitation improving short-term conditions, moderate drought ceased in south Florida.

Over the past week, moderate to heavy precipitation occurred in southeast Texas and Louisiana, and from central and southeast Arkansas eastward. The heaviest rain fell from southwest Louisiana to central Mississippi, where amounts ranged from 2 to 6 inches. With warmer than normal temperatures occurring across the region, drought expansion occurred in the parts of northeast Texas, southwest Arkansas, and northwest Louisiana that were missed by the heavier rains. Widespread drought expansion was made from northeast Texas to central and south-central Texas and the Edwards Plateau, as low precipitation this week continued short-term precipitation deficits in these regions. In south Texas, some improvement to drought conditions occurred in areas that received precipitation recently, thus making short-term precipitation deficits less severe or removing them altogether. Moderate drought was removed from the northwest Texas Panhandle, where short-term precipitation deficits had lessened. Moderate and severe drought continued in the Red River Valley in southwest Oklahoma and western north Texas.

Conditions were mostly dry north of the Ohio River Valley in the Midwest, with the exception of northern Michigan. Temperatures from 5 to 15 degrees above normal also occurred across most of the region. Aside from a continuing area of abnormal dryness in western Indiana, the Midwest remained free of drought or abnormal dryness this week.

Moderate and severe short-term drought continued across the southern portion of the Colorado high plains and adjacent southwest Kansas, and moderate short-term drought also continued in south-central Kansas, after a mostly warm and dry week across the High Plains region. Temperatures ranged from 5 to 10 degrees warmer than normal in Kansas to as much as 20 degrees above normal in North Dakota and eastern Montana.

Heavy precipitation, including mountain show, fell in many of the higher elevation portions of the West this week, with the exception of the Sierra Nevada and mountainous regions of Arizona and New Mexico. Cooler than normal temperatures prevailed in southwest Colorado and eastern Utah and adjacent parts of Arizona and New Mexico, while near or above normal temperatures were commonplace elsewhere in the West. In the Four Corners region, recent precipitation in higher elevation areas improved conditions, such that severe drought lessened to moderate drought around the Chuska Mountains. Lower elevation areas, however, are still suffering from severe precipitation deficits due to the paltry rainfall from the 2019 North American monsoon, and severe drought conditions remained in some of the lower elevation portions of the Four Corners region. Moderate to large snow packs in the San Juan and Sangre de Cristo Ranges in northern New Mexico and southern Colorado led to improvement from severe to moderate drought in the high country, though the San Luis Valley and other lower elevation areas in southern and western Colorado and northern New Mexico remained in severe drought. In the Pacific Northwest, large precipitation amounts, including mountain snow, improved conditions in some of western Washington, leading to the removal of moderate drought around Puget Sound and in southwest Washington. Farther east, mountain snows also occurred in northern Idaho and western Montana, as well as eastern Idaho and the Wyoming, Teton, and Wind River ranges of western Wyoming. Conditions improved as a result of this precipitation in eastern Idaho and western Wyoming. Moderate drought coverage also lessened in the Idaho Panhandle as a result of this heavy precipitation. Meanwhile, short-term moderate drought expanded in coverage in central Idaho, where recent precipitation was not enough to curtail short-term precipitation shortages and snow pack deficits.

During the Northern Hemisphere winter, the North Pacific subtropical high, and the low latitude Inter-Tropical Convergence Zone (ITCZ), migrate south toward the equator. The seasonal migration brings drier subtropical trade winds to the northern portions of Micronesia and ITCZ rainfall to the southern regions. The weather conditions across the U.S.-Affiliated Pacific Islands (USAPI) during this USDM week (1/1/20-1/7/20) reflected this seasonal pattern. The ITCZ, a near-equatorial trough with trade-wind convergence into it, continued across southern portions of Palau and the Federated States of Micronesia (FSM) for much of the week. The convergence and trough extended at times into the Marshall Islands (RMI). Tropical disturbances and weak circulations developed within the trough and convergence zone. Meanwhile, a dry trade-wind pattern remained entrenched across the Marianas, briefly interrupted by weak shear lines or frontal remnants which occasionally extended as far south as the northern FSM and northern RMI. The ITCZ crossed the equator south of Kosrae State, extending southeastward in the Southern Hemisphere as the South Pacific Convergence Zone (SPCZ). The SPCZ (monsoon trough) extended northeastward past the Samoan Islands, then migrated southwestward across the islands later in the week.

Satellite-based estimates of 7-day precipitation (QPE) showed areas of 2 to 4+ inches of rain across southern portions of Palau to southwest Yap State, southern Pohnpei State, and parts of the RMI. These bands were enveloped by 0.5- to 2.0-inch totals across most of the remaining FSM and RMI. No widespread precipitation was picked up by the satellite QPE over the Marianas. A huge swath of 1 to 2 inch rains, with locally much more, was indicated northeastward from the Samoan Islands, with 0.5 to 1.0 inch touching the islands of American Samoa.

In the Republic of Palau, December rainfall at the international airport was 9.86 inches, which was above the 8-inch minimum to meet most water needs. However, much of the rain fell in early and mid-December and was followed by a drying trend. During the first 7 days of January, the National Weather Service office (WSO Koror) received rainfall totaling just 0.33 inch. If drier-than-normal conditions persist across the Republic of Palau, short-term dryness could soon develop.

In the Marianas, it was the driest December during the 72-year period of record at the international airport on Guam, with a total of 1.46 inches. It was also very dry on Rota, where 1.54 inches fell. Saipan fared a little better, with a December total of 3.64 inches. The mostly dry weather has continued through the first 7 days of January, with less than one-quarter inch of rain falling at all major observation sites. With Guam and Rota failing to meet the 1-inch weekly minimum for 5 consecutive weeks, D0-S was introduced. However, recent reports from the Marianas indicate that impacts from the short-term dryness are muted, at least at this early stage.

In the FSM, D0-S was introduced for Kapingamarangi, where rainfall has failed to meet the 2-inch weekly minimum for 4 consecutive weeks. December rainfall on Kapingamarangi totaled 6.55 inches. In contrast, December totals topped 10 inches at Kosrae and Lukunor, while 21.17 inches soaked Pohnpei. Currently, insufficient rainfall data is available to provide an analysis for Fananu. Several other locations, including Yap, Woleai, and Ulithi, have received little rain the last 2 weeks, following appreciable precipitation during the week ending December 24, and will be monitored for the need to introduce D0-S in the near future.

In the Republic of the Marshall Islands, D0-S was retained for Majuro. Despite Majuro's December rainfall total of 13.03 inches, drier weather arrived late in the month. As a result, reservoir storage on Majuro fell to 22.904 million gallons by January 7, just 64 percent of the 36 million gallon capacity. Storage below 80 percent of capacity is indicative of drought concerns. In the 19-day period from December 19 – January 6, rainfall on Majuro totaled just 1.48 inches. Elsewhere in the RMI, there is neither dryness nor drought. Mili remains especially wet, following a December total of 17.94 inches. Not enough data is available at this time to provide an assessment for Utirik.

American Samoa remains wet, following a December rainfall total of 17.93 inches at the international airport. The weather has trended slightly drier in recent days, but the airport's January 1-7 rainfall of 1.21 inches still met the 1-inch threshold for most water requirements.

The U.S. Virgin Islands (USVI) have entered the traditional winter dry season, but unusually heavy showers have developed in many locations in recent weeks. Typically, about 40 percent of the annual precipitation in the USVI occurs from September to November, while just 12 to 15 percent falls from January to March. During December, rainfall across the USVI generally ranged from 2 to 6 inches, based on available data. Some of the highest amounts were noted across the northern islands of St. Thomas and St. John.

During December, there was a wide variety of rainfall totals on St. Croix, where moderate drought (D1-SL) persisted. Rohlsen Airport received 1.78 inches (60 percent of normal), while the cooperative observer at Montpellier netted 4.81 inches (138 percent). With the recent rainfall, groundwater levels at the USGS Adventure 28 well began to slightly respond, but the depth to water remained about 4.5 feet lower than the same time a year ago. If beneficial winter rains were to continue across St. Croix, the "SL" designation could be changed to "L" in the near future, to reflect long-term drought impacts such as reduced groundwater supplies.

Beneficial showers continued across St. Thomas in late December and early January. King Airport ended December with a monthly total of 4.93 inches (167 percent of normal), with more than an inch falling on the 31st. A CoCoRaHS observer near Anna's Retreat reported 1.52 inches of rain in a 24-hour period on January 1-2. The USGS Grade School 3 well continued to exhibit a groundwater response to the winter rains, indicating that neither dryness nor drought is present.

On St. John, the depth to water at the USGS Susannaberg DPW 3 Well has decreased to its lowest level (highest water table) since February 2019. A volunteer observer at Windswept Beach recorded 6.52 inches of December rainfall, representing the wettest December in that location since 2013. Based on the December rainfall data and groundwater response, abnormal dryness (D0-L) was removed from St. John. Unusually heavy showers continued during the first 6 days of January, with the Windswept Beach observer recording 1.18 inches. 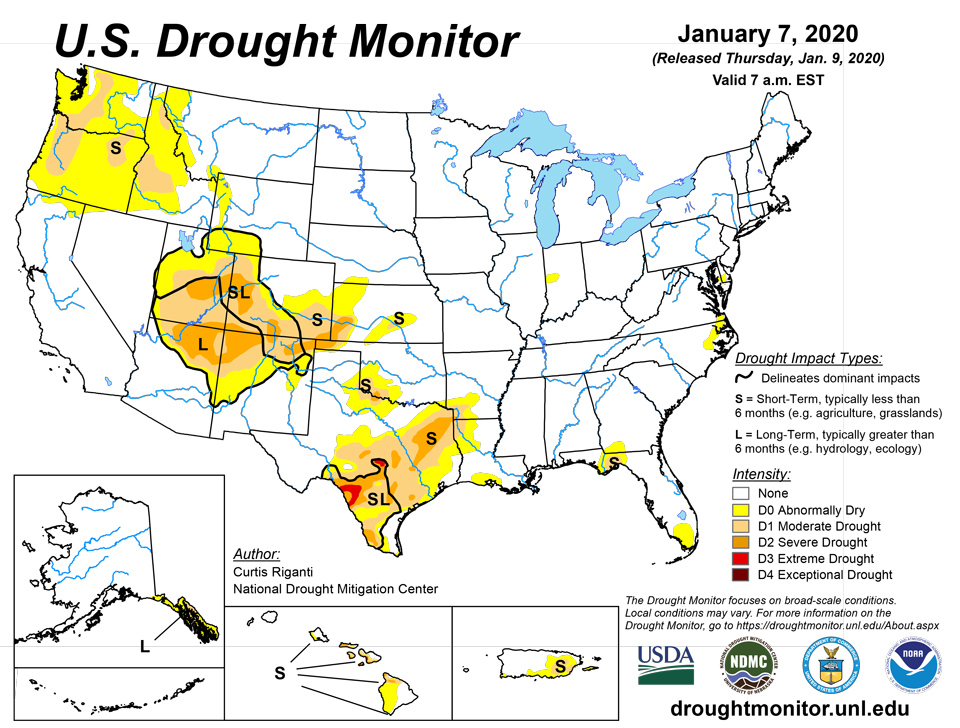